Thanks To Athens Ridge

The Oconee County Code Enforcement Office issued 502 single family and town home permits in 2013, exceeding the number issued for residential construction in 2006--before the housing collapse of a year later.

The county also issued 105 commercial permits in 2013, again exceeding the number in 2006.

The increase in building permits was not mirrored by increases in zoning requests processed by the Oconee County Planning Department, meaning that builders so far are using up the backlog of zoned properties rather than creating new ones.

The increase in residential permits reflects the issuance of permits for 190 town homes at the massive Athens Ridge student housing complex on Old Macon Highway at the border with Athens-Clarke County.

These comparison are based on data provided to me by B.R. White, director of the Planning Department and Code Enforcement Office.

The data go back through 2006 and show that the county issued 502 building permits in 2013 for residential construction, compared with 180 a year earlier. 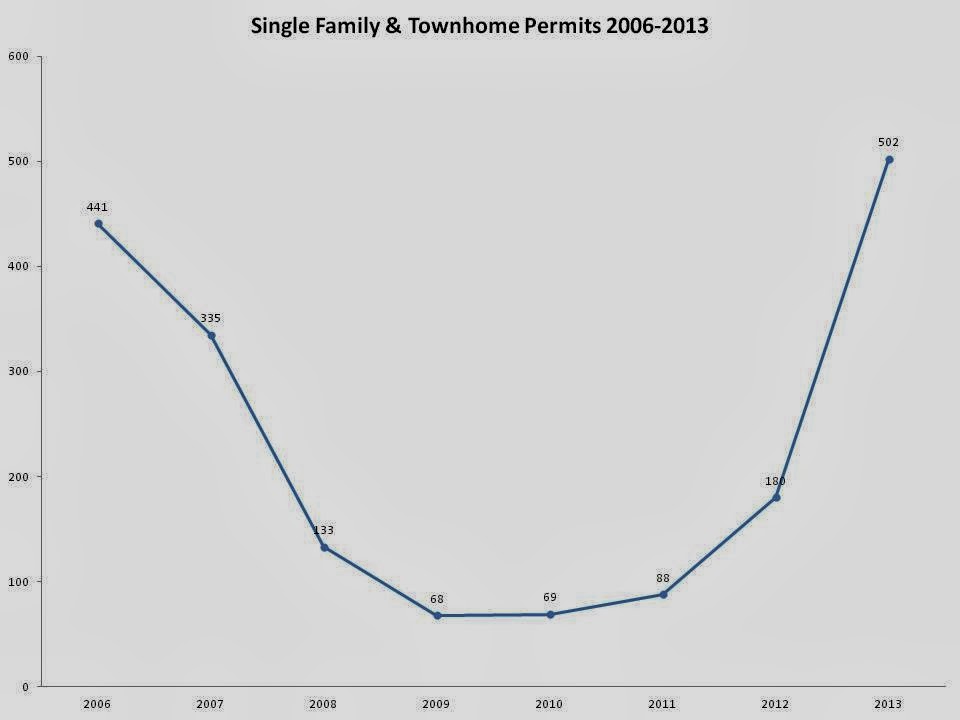 In fact, the county issued no town home permits any year going back to 2006. That year, it issued 441 housing construction permits.

(Click on the charts or pictures to enlarge them.)

The county issued 105 commercial building permits last year, compared with 57 the year earlier and 69 in 2006. 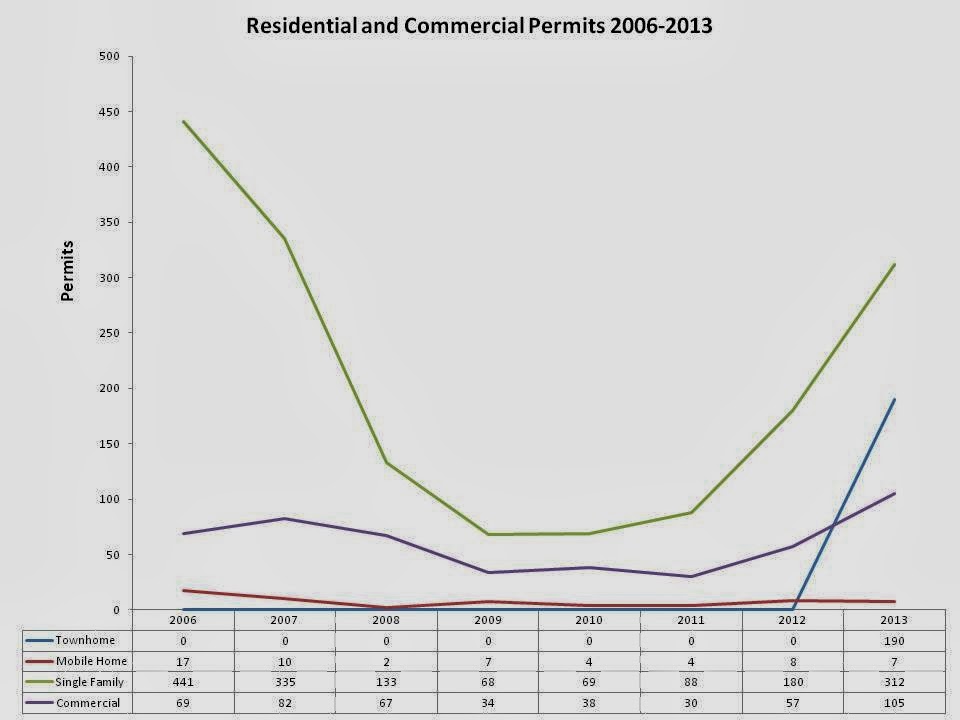 The county issued seven mobile home permits last year, one fewer than the year before. It issued 17 in 2006.

Special use permits are for such things as churches or some other use of the land that doesn’t involved a change in zoning category. 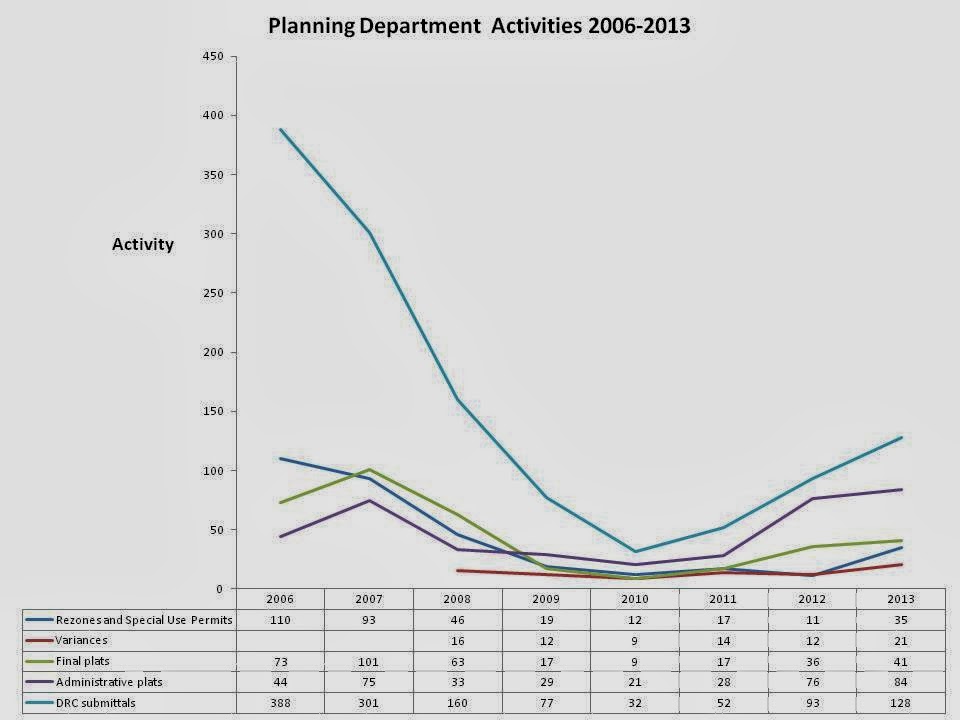 The number of variances to zoning laws was up from a year earlier. Comparable data do not exist for 2006 because records were not kept of variances until 2008, according to White.

The number of final plats and administrative plats, the latter often involving a division of family-owned land, also were up slightly from a year earlier. The former remain far below 2006 levels.

Submittals to the county’s Development Review Committee totaled 128 last year, up from the year earlier but far below 2006 levels.

It reviews cases as they move toward construction. 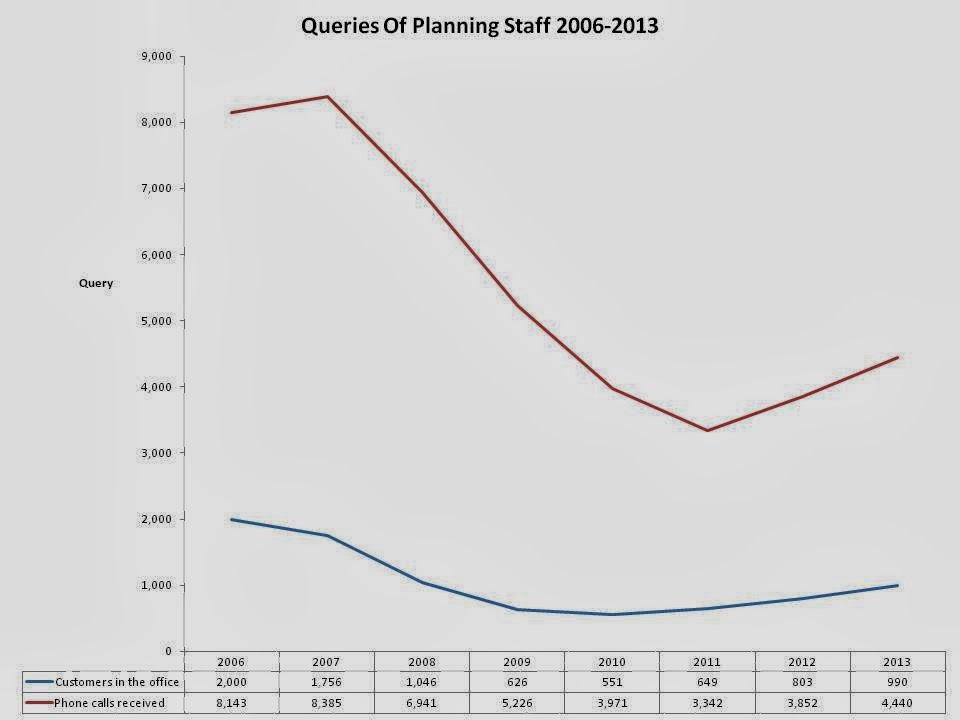 The Planning Department showed an increase in the number of customers who came into the office in 2013 compared with a year earlier, but the 2013 figure is still less than half the figure from 2006.

The number of phone calls in 2013 also was up from a year earlier, but it remains far below the 2006 levels.

Athens Ridge is on 35 acres of land on McNutt Creek just before it reaches the Middle Oconee River. The entrance to the complex is off old Macon Highway at White Oak Road.

The development is being marketed as “luxury student living,” with bedrooms renting from $420 to $499 per month, a shuttle to the University of Georgia, tanning spa, fitness center, game room, club house, hot tubs, and a large outdoor pool and pool deck.

The 23 residential buildings are in rows running from Macon Highway and behind the Church of the Nations. Each unit will have a minimum of 2,080 square feet of space on two floors, according to Planning Department documents.

The buildings are surrounded by 570 parking spaces.

The pool and accompanying deck and lazy river water ride are at the rear of the property.

The Oconee County Planning Commission rezoned the property for what is now Athens Ridge in September of 2006. At the time, P&A Ventures Inc. proposed a multi-family residential condominium development.

The documents filed with the Oconee County Planning Department list Athens Ridge Land Co. LLC of Atlanta as the current owner of the property. In the Secretary of State Office, that company is listed as from Bloomfield Hills, Mich.

The buildings are town homes by county zoning laws. The county has no regulations on who can and cannot rent out the property they own.

No firm figures exist on the number of lots already zoned for residential or commercial development in the county but sitting undeveloped.

Two projects give a sense of the problem.

In 2003, the county approved a housing and commercial development on 443 acres on Goat Farm Road and U.S. 78 called Westland. It was to contain 430 housing units as well as commercial space.

It is now surrounded by a fence. 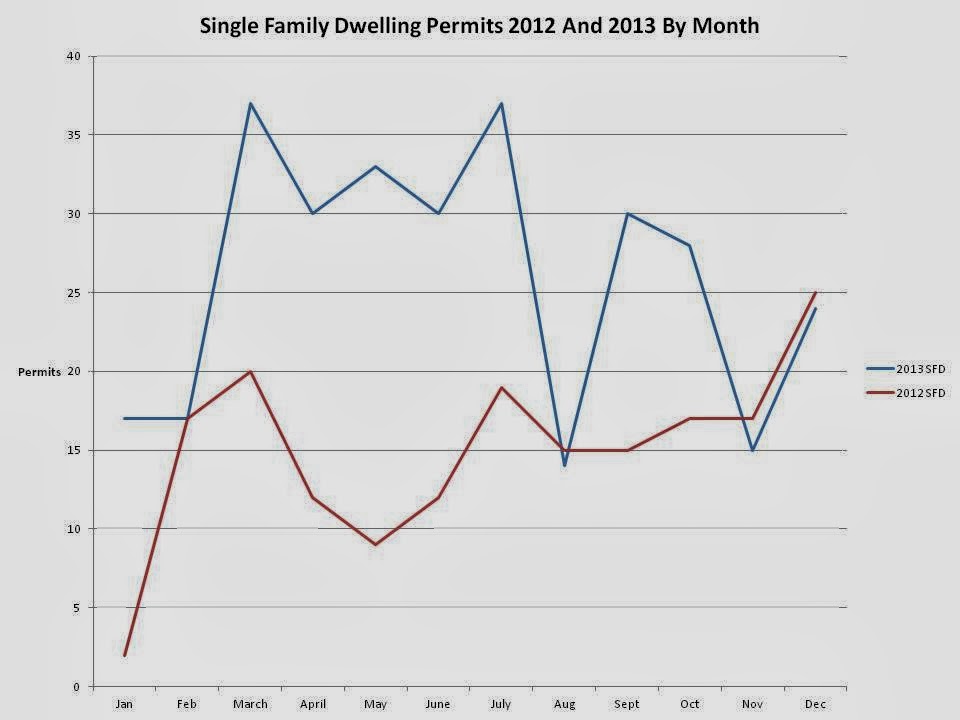 In 2004 the county approved the 500-acre Parkside project between Hog Mountain Road and Mars Hill Road.

Access to the roadways into the project off Mars Hill Road and Hog Mountain Road are blocked.

Other, smaller residential and commercial projects lie dormant around the county.

Single family dwelling permits were at or above 2012 levels for all but three months in 2013, and they were just below 2012 levels in those months. 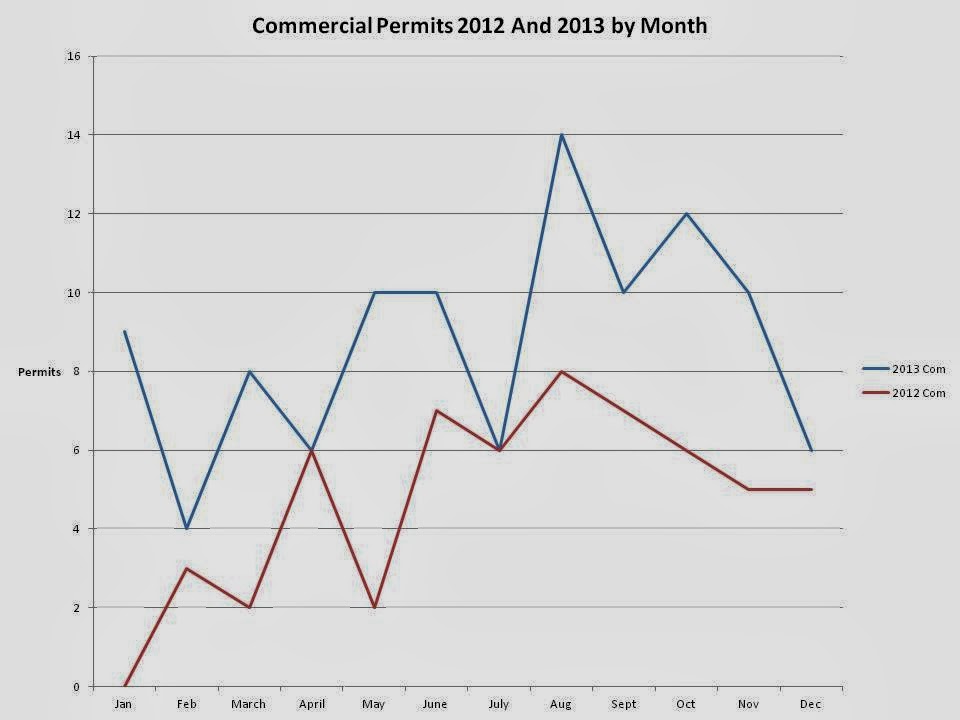 Epps Bridge Centre came online in late 2012 and 2013, so much of the commercial permit activity in 2013 reflects that fact.

The foundation permit for the theater, the first actual building permit issued for the center, was in October of 2012.

The center is on the Oconee Connector at SR Loop 10 and Epps Bridge Parkway.

Imagine how great it would be if we had managed to get a different administration in Washington.

Can you say "bait and switch"?

Is this the direction Melvin and commissioners are leading us? Cheap student housing, and everything, good or bad, that goes along with it?