These two requests bracket $100.2 million in requests that will be summarized in a public hearing with the Oconee County Board of Commissioners that will start at 6 p.m. on Monday at the Civic Center on Hog Mountain Road.

The Commissioners have to pare that list down to about $38 million before they vote on March 4, as they are expected to do, to put the issue on the May 20 ballot.

The Monday night meeting is the second and final chance for citizens to publicly express their feelings about the proposed projects and which ones will likely lead them to vote in favor of the tax at the May election.

Oconee County Administrative Office Jeff Benko told me on Friday that the format for this second meeting will be the same as for the first.

He will summarize the requests made by the county’s department heads and elected officials and then give citizens the chance to respond.

The only difference in the list is that $2.5 million had been added to the requested projects.

Benko told me that citizen activist Russ Page has proposed that the SPLOST language include $2 million for farmland protection and $500,000 for historic and scenic preservation.

Benko said at the Jan. 13 meeting that he didn’t have any cost estimates for these projects, though he said citizens had expressed an interested in them. The current SPLOST includes both farmland protection and historic preservation funding.

Benko told me on Friday that a third citizen interest–for sidewalks–would be incorporated into the request of the Public Works Department, which already had asked for $12 million.

The department heads and county officials who had put forward the requests to the BOC did not speak at the Jan. 13 meeting, also held at the Civic Center and attended by about 50 people.

Rather, they relied on citizens to make the case. The Parks and Recreation Department and Library Board advocates were best organized.

The only proposal that produced a negative response was the one for the new judicial facility/courthouse.

Coroner Carson told me on Friday that he is considering stepping to the microphone himself on Monday to make the case for his request for a van with a refrigerated and insulated compartment separated from the driver. Included as well is a request for a stretcher with mounts.

Carson said he has been asking for the vehicle since before we was elected coroner in 2008. He served as deputy coroner for 10 years before being elected coroner.

Carson had asked for $47,720 for the van in last year’s budget requests to the county, but the Commissioners did not approve the money.

Carson said he plans to ask for the money again this year, because he needs the van and cannot wait on SPLOST 2015 funds.

Not Able To Serve Needs

The Coroner is an elected official assigned responsibility for holding an inquest into the causes of death if a person dies under violent, uncertain, suspicious or unusual circumstances.

Carson said that he is unable to provide the kind of service residents of the county need without this van.

Included is required transporting of bodies to the Georgia Bureau of Investigation lab in Atlanta for autopsies, taking bodies to the funeral home, and storing bodies appropriately when other options are not available.

At present, Carson said, he has to rely on purchased or volunteer transport, and these are not always available.

Carson said he made the request for the $55,000 in SPLOST funds only because he was told by the county that it doesn’t have other money for his van.

Judge Sweat came forward last year, in accompaniment with Sheriff Scott Berry, to make the case for the new judicial facility, which Berry has said in the past he wants to be located near the jail on Experiment Station Road as it enters Watkinsville.

Sweat and Berry have been allies in the past, with Berry sending out campaign material endorsing Sweat in his nonpartisan election in 2010.

Sweat told a gathering of citizens in Watkinsville last Sunday that he was not locked into any location for the new facility.

He also said that the figure of $25 million “was more than just a back of an envelope calculation” but instead reflects realistic estimates of the needs of the judiciary in the next 20 to 40 years.

The Utility Department made the next largest request, at $13,050,000, followed by the Public Works Department request for $12 million and a request by the Civic Center for a similar amount.

The county needs $6.6 million to pay off continuing debt, most for the jail and for Veterans Park.

The Parks and Recreation Department requested $5.5 million, as did the libraries.

No Hints Of Sentiments

The Commissioners gave no hints at the first meeting in January of their receptivity to any of these requests.

The judicial request presents the biggest challenge not only because of the amount but because it involves a decision about location.

At the meeting last Sunday attended by Sweat as well as at another held earlier in the month, sentiment was strongly in favor of keeping governmental facilities in the center of Watkinsville.

The chart below lists the projects and amount requested for each. Click on the chart to enlarge it. 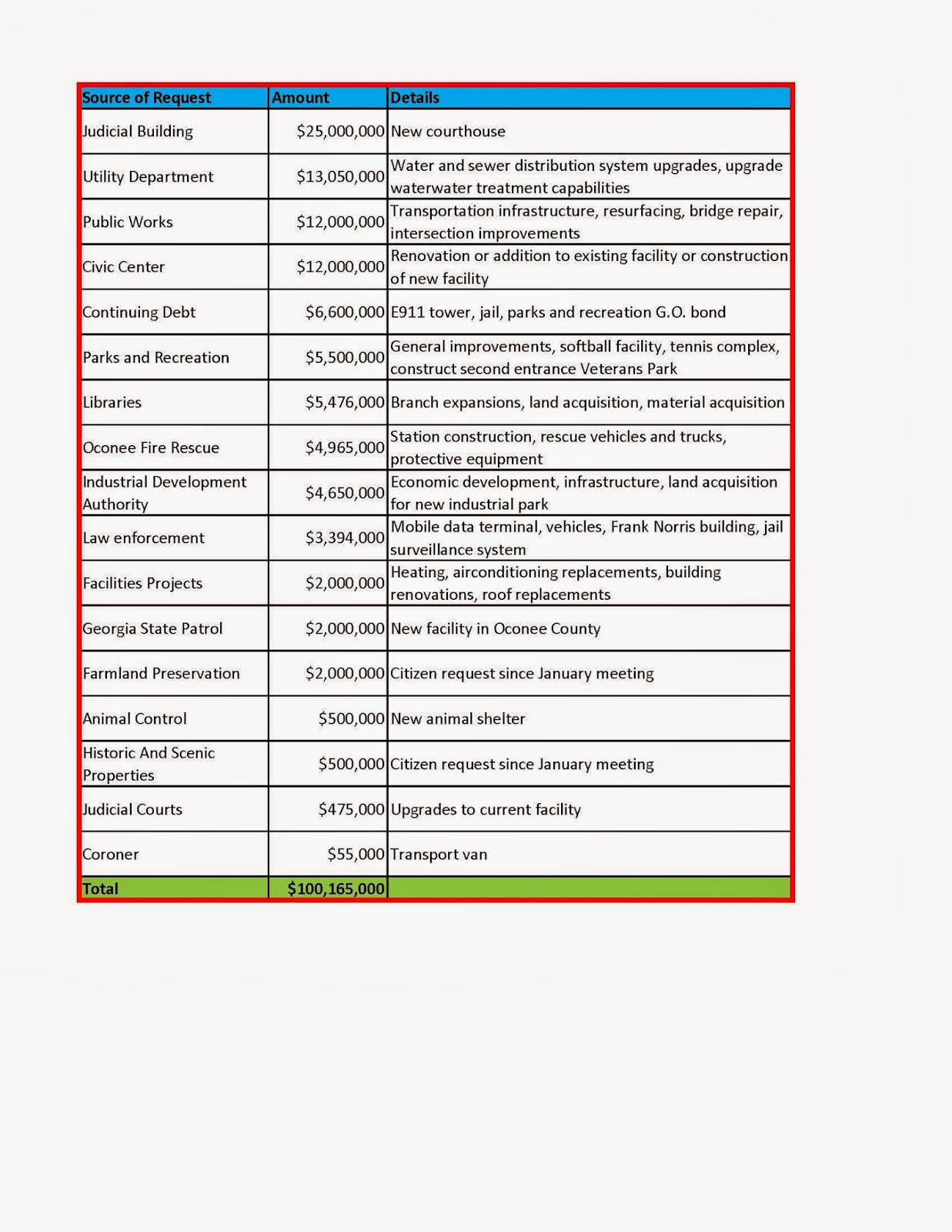 1) Sorry Judge Sweat, you missed the December deadline to turn I a SPLOST request.

Melvin, if you allow this request, you are breaking the county's own rules.

2) Both meetings were scheduled at 6 pm on a Monday. Why is this??? What if you have to work during that time, or have kids activities? One of the meetings should have been on a weekend, or at least on a different time & day of the week.

3) Heck NO to a Taj Mahal $25 million courthouse. Sorry Judge Sweat and Sheriff Berry, $25 mil is a ridiculous amount. Go back to the drawing board, and propose one for a fraction of that amount.