Board of Commissioners incumbents Margaret Hale and John Daniell bested their challengers in the Oconee County Republican primary today, though Hale did not get a majority of votes in the three-way race and will meet challenger Bubber Wilkes in the runoff election on July 22.

Rep. Paul Broun, seeking the Republican nomination for the open U.S. Senate seat, led the field in his home Oconee County, with 31.1 percent of the vote. David Perdue got 26.6 percent of the vote, and Jack Kingston got 21.4 percent.

Jody Hice led the crowded field of Republican candidates for the 10th District seat in the U.S. House of Representatives being left vacant by Broun. Hice had 31.9 percent of the votes, followed by 25.2 percent for Mike Collins.

The Board of Commissioners races were the only contested ones locally.

John Daniell received 65.6 percent of the vote in the race for the Republican Party nomination for Post 2. John Larkin received 34.4 percent. 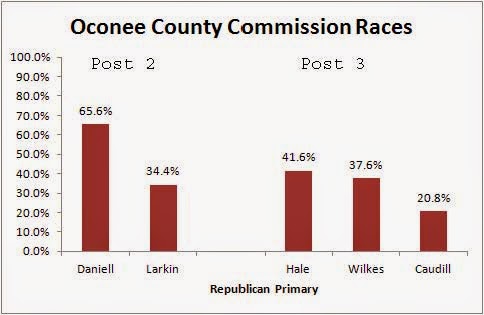 A majority of those voting in the Republican primary (52.0 percent) said they did not support changing the district lines for the 117th District and 119th District in the Georgia House of Representatives to bring Oconee County back into a single district.

The Democratic Party did not have any candidates on the ballot for the BOC races, meaning the Republican candidates likely will be unchallenged in November.

Results are unofficial but include all but a handful of provisional ballots, that is, ballots not yet accepted as valid, and late returning military ballots.

Republican ballots accounted for 88.9 percent of those cast in the county.