The Oconee County Board of Commissioners plans to make a decision next Tuesday night on two projects on Daniells Bridge Road despite a recommendation of its Citizens Advisory Committee on Land Use and Transportation Planning that the county not move forward with the projects as drafted.

The BOC has before it for approval next week an agreement with the Georgia Department of Transportation for a $3.7 million widening of Daniells Bridge Road from Hog Mountain Road to Chestnut Hill Road that would use federal, state and local money.

The Citizens Advisory Committee on Land Use and Transportation Planning voted at its meeting on March 10 to remove the project from the list of state and federally-funded projects and to recommend that the work be scaled back and done locally for about $800,000.

A second agreement with GDOT is for construction of a $4.9 million extension of Daniells Bridge Road with a flyover of SR Loop 10 to connect with the stub of the Oconee Connector at Home Depot.

The Land Use Committee at its March meeting voted to greatly expand the extension and flyover project to $20 million on the recommendation of county Public Works Director Emil Beshara, who has said that the document before the BOC is not workable.

Commissioner Jim Luke last night raised questions about moving forward with the two project framework agreements with the state given the discussion by the citizen advisory committee, but Chairman Melvin Davis said he didn’t want to wait on the report of the citizen committee.

Davis told Luke (in the video below) that the Land Use Committee already had recommended that the county move forward with the two project framework agreements, and he is technically correct.

The Committee began its review of county road projects in late summer after the Board of Commissioners voted on Aug. 5 not to approve the project framework agreements sent to the county the month before.

Davis, in fact, was the one who suggested that the Land Use and Transportation Planning Committee review the various road projects in the county and come back to the Board with a recommendation on priorities.

In November, at the request of Davis, the Land Use Committee short-circuited its discussion and voted to recommend that the county sign the two Daniells Bridge Road project framework agreements and a third involving the widening of Jimmy Daniell Road.

The Board did approve the Jimmy Daniell Road project.

When the Board of Commissioners in February refused to agree to the two remaining project framework agreements involving Daniells Bridge Road, Commissioner John Daniell in particular encouraged the Land Use Committee to continue to review county road work that might be funded in part with state and federal funds.

It was as part of that ongoing discussion that the Land Use Committee on March 10 voted to alter the two Daniells Bridge Road projects, eliminating the widening project entirely from its list of considered projects

The Land Use Committee decided that the widening of Daniells Bridge Road should be scaled back to consist of some center turn lanes and acceleration and deceleration lanes and be removed from its list of projects under review, since no state and federal funds would be required for the scaled-back project.

It also decided that the Daniells Bridge Road extension and flyover should be greatly modified should the county decided to go forward with it.

Both Beshara and Strategic and Long Range Planning Director Wayne Provost have said that the Daniells Bridge Road extension project as envisioned in the state project framework agreement is not likely to be eligible for the needed federal funds because it does not have a “logical terminus.”

The proposal before the county calls only for construction of the extension and flyover, not other improvements to Daniells Bridge Road.

Beshara proposed to the Land Use Committee that it modify the project to more accurately reflect what would be built if the county were to move forward with the extension and flyover as a state and federally-funded project.

The modified plan, Beshara said, would cost about $20 million.

It also would involve straightening and widening Daniells Bridge Road from the terminus of the flyover all the way to the Oconee Connector.

That new road would require taking out homes on Lynn Drive and Will Usher Road, Beshara said, as the video below indicates.

OCO: Beshara On Flyover from Lee Becker on Vimeo

Beshara gave no firm estimate of county costs for the new project, but they almost certainly would be much more than the $300,000 in the project framework agreement now before the county for approval.

The Land Use Committee made another significant change in the project list under review at its March 10 meeting.

It voted to add a flyover of SR 316 at the Oconee Connector to the list, bringing the total back to 18 projects, since the widening of Daniells Bridge Road had been eliminated.

That intersection has been a topic of frequent conversation at Land Use Committee meetings, and Bob Isaac, committee member and harsh critic of the extension and flyover project, said (in the video below) that the Committee simply had to treat improvements to that intersection as a major transportation need of the county.

The county had listed that project as costing $25 million when it was preparing for the Transportation Special Purpose Local Option Sales Tax back in 2011.

The state actually estimated the cost at $20 million when it put the list before voters. Voters turned down the tax in July of 2012.

Beshara told the Land Use Committee he thought the project might be built for as little as $15 million.

No firm plans exist for the flyover, and one open question is whether it would have exit ramps from Loop 10. Davis has written favorably about such a plan.

Beshara presented plans to the Board back in August that did not include those ramps.

I used those plans in my posting after that August meeting and present them below again.

The larger diagram shows the loop at it leaves the Oconee Connector at Home Depot and then connects with Daniells Bridge Road before that road reaches the curve at the on-ramp to SR Loop 10 from SR 316. 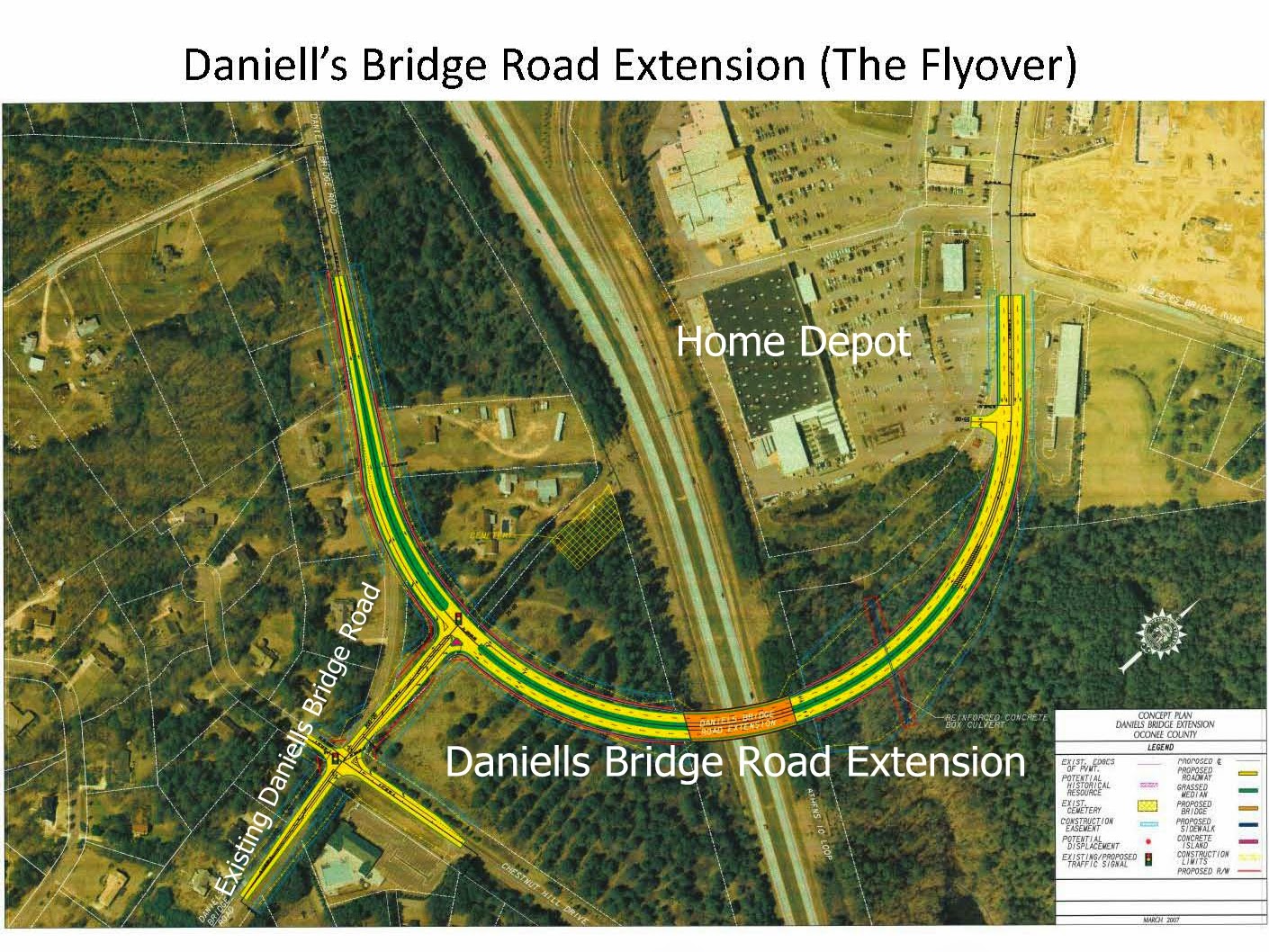 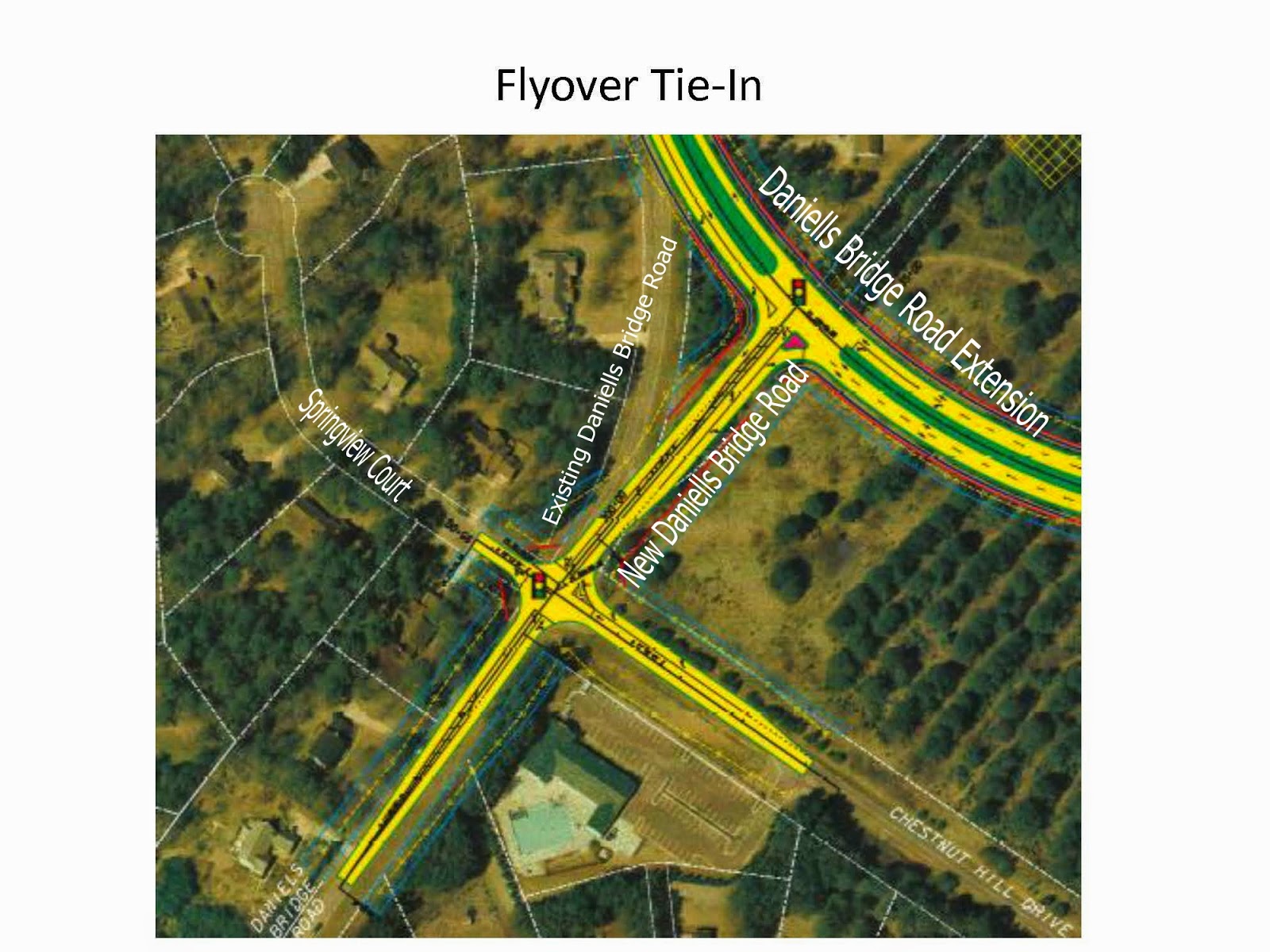 I have added additional labels (in white) to the two diagrams Beshara released. Click on the diagrams to enlarge them.

Another posting I did on March 3 includes the Google Map below that shows the area being discussed.

BOC Chairman Davis has pushed hard for approval of the two Daniells Bridge Road projects at BOC meetings and through his column on the county web site. Such public advocacy by Davis is unusual. Davis prefers to work behind the scenes.

Davis has been joined in support of the flyover by former BOC Chairman Wendell Dawson, who generally is a strong critic of Davis. Dawson was chairman when the flyover was first proposed more than 20 years ago.

Dawson sent a note to those on his listserv on March 26 saying “The Flyover is part of a larger traffic flow plan that should go forward.”

Dawson dismissed critics of the project, saying “A dozen or so of folks (usually neighbors) attending meetings concerning projects is not representative of all citizens.”

Jamie Boswell, representative to the state Transportation Board for the area, told me in an interview I did with him on March 23 that the flyover would benefit “95 percent of the people in Oconee County.”

Boswell, a commercial real estate broken, also acknowledged that the project would benefit his clients along the proposed roadway. The state Transportation Board would be asked to vote to fund the two Daniells Bridge Road projects if the county were to sign the project framework agreements.

Kittle has been going door-to-door throughout the area asking people to sign his petition in favor of the project.

Kittle has said he would like to develop his property and move to a more quiet area of the county.

Residents in Welbrook Farms subdivision have organized an online petition in opposition to the flyover.

Residents of Welbrook Farms and Birchmore Hills, which are closest to the proposed extension and flyover, have been most vocal in their opposition.

I live in Welbrook Farms and spoke against the extension and flyover at Commission meetings earlier this year.

Video Of Land Use Meeting

The meeting of the Board of Commissioners on next Tuesday (April 7) will be held at the courthouse in Watkinsville.

As in the past, the item is one of the last listed on the agenda.

I was not able to attend the Land Use and Transportation Planning Committee meeting on March 10.

Sarah Bell did attend and shot the video below.

The meeting ran for a little more than an hour and contained the video clips I used above.

If the county leaders want to continue this degree of development, they will find a way. The countys voters chose these people, so this is what happens. I feel for the people living in this area that will be impacted. Maybe all affected need to find a way to make money developing your property and move to a "guieter" part of the county, which with these people in charge will probably not stay "quiet" very long.

This was inevitable. Once his mind is made up, it will be done. Makes me sad. Satisfy a few at the expense of the many.