The Georgia Department of Revenue on Thursday issued a policy bulletin to define alternative fuel vehicles for the purposes of imposing the new fee on these vehicles dictated by the transportation bill passed by the Georgia General Assembly in late March.

Oconee County Tax Commissioner Jennifer Riddle said there has been some confusion among county residents about the new fee and the license plates and that owners of hybrid electric and gasoline vehicles who received July tag renewal notices actually were misinformed that they would have to pay the alternative fuel vehicle fee.

The new policy bulletin is effective July 1, when fuel taxes and prices will increase as a result of the new law and when a new fee of $5 will be added to the bill for those who stay in a hotel, motel or other similar accommodation throughout the state.

The excise tax at present is 7.5 cents per gallon for both gasoline and diesel.

The revenue from the fuel tax increase, the hotel fee and the alternative fuel vehicle fee is to be used to fund transportation infrastructure projects around the state.

The transportation act passed by the legislature defines “alternative fuel” as electricity, natural gas, and propane.

The fees are in addition to license plate fees.

The job of the Department of Revenue was to define more precisely what the definitions meant and determine how they meshed with the license plate categories in existence.

Tax Commissioner Riddle told me in an email message last week that “there have been some different interpretations of the bill” and that the Department of Revenue “policy has changed a few times since the bill was passed.”

Riddle said that “initially, the alternative fuel fee was going to apply to hybrid electric-and-gasoline vehicles.”

License renewal notices, sent from Atlanta, for those persons whose birthday is coming up in July used this early interpretation and included the alternative fuel fee, according to Riddle.

Given the new policy, she said, those fees now will be waived.

“We received a lot of calls about the fee,” Riddle wrote.

Additional confusion comes about because of the availability of a special license plate that lists the vehicle as an “Alternative Fuel Vehicle.”

Individuals wanting this tag must pay a one-time manufacturing fee of $25, the $20 annual registration fee, and a $35 special tag fee.

Cars with this license plate can use the HOV lanes in the Atlanta area.

Only owners of pure electric cars are required to pay the alternative fuel vehicle fee.

The chart below shows the link between the fee and the license plates. (Click the chart to enlarge it.) 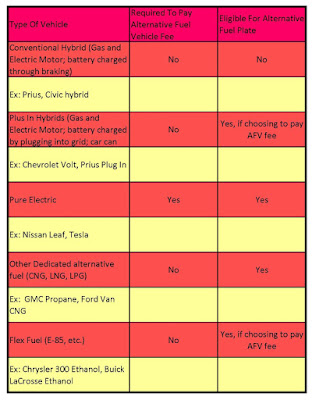 The transportation bill passed in March also includes highway impact fees that are to be collected at the times of licensing.

The GVWR can be found on the door pillar of the driver’s side of the vehicle as part of the manufacturer’s label, according to Riddle.

Many of the larger pickup trucks, as well as vans, motor homes and busses, have weights requiring payment of this fee, she said.

Thank you so much Lee for this blog. You saved me $200. The tag office is overwhelmed right now. I went in today for my July payments, having received the incorrect amount for my Prius gas/electric hybrid. The lady at the counter said I did owe the $200 fee so I asked to look at her chart with her and pointed out that my Prius is not a plug in and therefore I did not owe the $200. She agreed and took it off. Without your blog, I would not have known this. Everyone should pay attention and know what you owe before you go to the tag office and certainly know that your July bills may be wrong.