The problems at Oconee County’s two sewage treatment plants began in the second half of 2013, according to records at the Georgia Environmental Protection Division, which has the mandate to monitor operation of the plants.

Until that time, the Environmental Protection Division had identified only minor problems with the operation of the county’s two treatment plants.

On Sept. 13, 2013, Pete Dasher, program manager for the EPD Northeast District, wrote to the county telling it of “serious” violations of the county’s permit to operate the Calls Creek plant, just north of Watkinsville.

On Dec. 16, 2014, Donald H. McCarty Jr., EPD Northeast District manager, wrote to the county about “serious violations” at both the Calls Creek plant and the county’s Land Application System on Rocky Branch Road.

Those two reports–both permit violation notices--anticipated problems at both plants in recent months that have coincided with the resignation of Utility Department Director Chris Thomas and of Wastewater Supervisor Gene Price and with the county’s hiring of a consultant to help clean up problems at the plants.

Calls Creek, into which the county’s Calls Creek wastewater treatment plant discharges, has shown high levels fecal coliform bacteria in the past, indicating that the water has been contaminated with the fecal material of man or other animals.

A report by the Northeast Georgia Regional Commission in 2010, however, attributed that problem to septic systems along the creek and to cattle, not to the county’s wastewater treatment plant.

Files at the at the Northeast Regional Office of the EPD, 745 Gaines School Road in Athens-Clarke County, also suggest the Calls Creek plant and the companion Rocky Branch plant have had a good record of performance until recently.

I went through four folders containing information on those plants on the afternoon of June 5 at the EPD office.

The files–two each for the two facilities–contained documents related to periodic visits of EPD staff to the county’s facilities and correspondence about plant operation.

The files went back to the beginning of 2011 and included copies of some older correspondence.

Until the September letter of 2013, that correspondence made no reference to any “serious” problems at the two plants, though it did identify problems.

On May 11, 2009, Vickie A. Yarbrough, EPD environmental compliance specialist, wrote to John Hatcher, then assistant Utility Department director, and told him that the sign at the Calls Creek outfall had been removed and needed to be replaced.

Her field inspection four days earlier revealed that “The facility was well maintained,” she wrote.

On Sept. 28, 2011, Yarbrough wrote to Utility Department Director Thomas saying that her compliance inspection on Sept. 22 showed some problems with “laboratory records.”

Wastewater Supervisor Price wrote back, and the exchange with Yarbrough was cordial, with Yarborough simply writing “Thanks” when Price provided what she asked for.

EPD asked for more detail only for the January 2015 spill.

In March of 2011, Yarbrough wrote to Price telling him that data from the report for the LAS site were incomplete. She labeled her report a “Noncompliance Documentation.”

Yarbrough wrote in May of 2012 an inspection report based on her compliance inspection that month.

She again said documentation was incomplete, but the issue focused on measures of flow resulting from a malfunctioning flow meter. She asked for a letter in 30 days explaining how that was to be corrected.

In September of 2013, Yarbrough said that some of the data required on the discharge monitoring report had been provided only on a separate sheet of paper and asked that the Discharge Monitoring Report be revised.

In August of 2014, Yarbrough investigated a complaint about an “intense” odor from the plant.

“There was some odor,” she wrote. “It seemed to not be excessive. I stopped on Rocky Branch Road and got out of the truck and the odor was very faint and not constant.”

The plant was operating properly, she wrote.

On Sept. 13, 2013, EPD Program Manager Dasher wrote to Utility Department Director Thomas in response to a compliance inspection conducted by Yarbrough on Aug. 29.

Dasher said the plant “operator” could not provide Yarbrough with “any historical fecal coliform data sheets. This is a serious violation because records of laboratory results must be kept for three years.”

He then listed 31 other operations and reporting and laboratory issues that needed to be resolved.

“Drying beds are full of sludge and have a lot of plants growing. The operator said that they were planning to improve the beds but the equipment was not currently available to do this.”

Dasher sent Thomas a notice of permit violation on Nov. 25, 2014, regarding the LAS site, which was followed on Dec. 16 by the letter from McCarty, restating the notice of violation.

Dasher said the new permit for the LAS site issued on July 18, 2014, required analysis of samples from the storage pond–one of four ponds on the site. Sampling from this pond was a new requirement, he said.

Dasher said that Yarbrough had written to Price and then called him “and told him that monitoring this pond was not optional.”

“No storage pond monitoring has been completed since the new permit has been issued,” Dasher wrote.

On Dec. 10, 2014, Yarbrough conducted another compliance inspection at both county sites.

McCarty’s letter followed, and it listed five violations of the county’s two permits.

The county still was not using the required flow meter at the LAS site, McCarty said.

Sampling was not being done at all required locations at the LAS site.

Soil data were missing for the LAS site.

A Class III operator had been performing the fecal coliform tests.

“Using an uncertified person to perform required laboratory work without supervision...is a serious violation of the permit,” McCarty wrote.

The permits to operate the two wastewater facilities, however, are issued to the Board of Commissioners.

The EPD permits are sent to BOC Chairman Melvin Davis.

Davis sent McCarty an email message on Jan. 21, 2015, thanking McCarty for a telephone conversation about the LAS “issues.”

Davis copied that to all four of the voting commissioners.

The timeline for the development of this story is below. Click a chart to enlarge it. 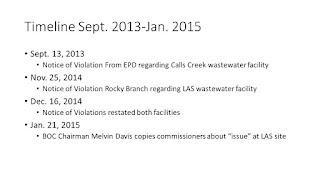 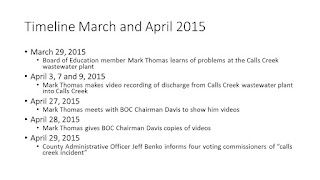 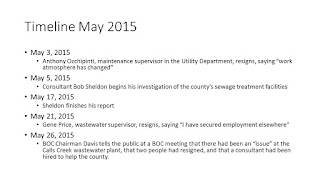 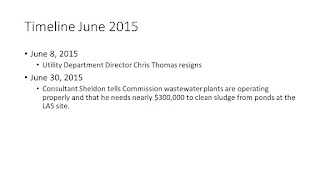 The roots of this revelation continue to grow.
With the level of growth currently and planned, this is serious.
Stay tuned.

Melvin and the "see no evil, hear no evil, speak no evil" commissioners knew about these issues...and did nothing??!!

I heard from one of the employees who recently left, and he stated that he and his fellow staff had asked for new membranes for months, and were told new membranes were too expensive.

This is a BIG deal. Too many Oconee residents follow national and state politics, and ignore what happens here in our own county.
Please help spread the word about this story.

It truly is a big deal, and it's indicative of so many similar important issues that have been poorly handled by the Melvin Davis-led commission (millions spent on Caterpillar with little return, special treatment for Frank Bishop and Jamie Boswell, millions to be spent on a flyover bridge??!!).

Margaret Hale and Chuck Horton: Please run again for commission! We need commish's who ask questions and believe in accountability and transparency.