The Oconee County Animal Shelter is holding a petfest on Saturday at Heritage Park in the south of the county to raise money to support the Shelter’s adoption program.

The event will include pony rides and face painting for children, food and crafts for the adults, and low cost rabies vaccines and microchipping for the pets.

The event, which will run from 10 a.m. to 4 p.m. regardless of the weather, is free to the public. Parking also is free.

Money raised from donations, from fees paid by vendors, and from sponsorships, will go into the Shelter’s medical fund to treat animals to make them ready for adoption.

The Shelter has not had to euthanize “any adoptable animals” since March of last year, according to Catlyn Vickers, director of the Shelter.

That was when the Shelter started its foster program, which extends the period of time that an animal can be held for adoption, according to Vickers. 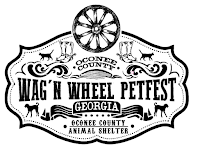 Vickers said the Shelter has had success in finding homes for dogs, cats and even some ferrets.

“We adopt out, as far as we know, only healthy and well-adjusted animals,” she said.

Before being put up for adoption, animals are evaluated for temperament and health.

If an animal needs dental work or treatment for heart worm or even some types of surgery, Vickers said, the Shelter uses money from its medical fund to pay for those services.

The event on Saturday, officially called the Wag’n Wheel Petfest, will raise money for that medical fund.

It is the first such event held by the Shelter.

Vickers said the idea for the petfest resulted from brainstorming by the staff and volunteers on how to do fundraising.

Donations of any amount will be accepted at the event.

Money also will be raised from a raffle and silent auction.

The booths will feature glass etching and wood carving.

A reptile specialist will be on site.

Anne Yarborough Photography will have a photobooth.

Agility demonstrations will be held.

Exceptions will be made for animals being brought for the low cost vaccination.

Local rescue operations and shelters will have pets for adoption.

Rev. Don Randall of the Unitarian Universalist Fellowship of Athens will bless animals at 11 a.m.

Heritage Park, south of Farmington at 2543 Macon Highway (U.S. 441), has enough space under roof that weather should not be a factor, Vickers said.

The Animal Control does a great job, despite having an incompetent advisory board.

Hey Anon 10:57 pm, how 'bout calling the shelter and asking those questions yourself??!!

The advisory board has NO BUSINESS determining which animals are adoptable. That's why we pay professionals.

Lee Becker leaves a great article about a fund raising event for the shelter's medical fund to help the animals and all you can do Anonymous 10:57PM is ask questions not relating to Wag'n Wheel PetFest? What's wrong with you? 12:37 PM is right. Have you EVER been to the shelter, called, asked what you can do to help, see how many hours the staff takes to temperament test the animals to make sure the adoption is a success, and see what dedication the staff has for the shelters’ animals?

What is YOUR ulterior motive for all YOUR questions and why do you hide behind Anonymous? Have a back bone and let people know who you are or better yet, why don’t you go to the source and find out for yourself or are you afraid you won’t find anything bad to complain or write about?

Why do people like you always want to make indirect innuendo something is not right? You are a sad person who wants to find darkness where there is none. The shelter and its’ program is a success.

Why can’t you be happy for the positive way animals are being saved?

You sound like one of the Animal Control Board Members who asked most of the same questions. Are you a board member trying to get the information before the next meeting or just a person sitting in the back row at the last one?

Here’s a no brainer for you. Why don’t you look at Lee Becker’s’ blog from the July meeting where the members were exposed for what they are. How about questing their motives and actions. From the interviews, 4 members said they were involved with either breeding, showing, and judging or all. They are members of AKC and this is not what the shelter is about. That Hamilton person said tethering is good for dogs and can keep them safe. How about questioning her. How can it keep an animal safe from predators, other dogs, or kids throwing rocks and sticks?

How about being someone who wants to help? You can do it and no one will know who you are.

Get your priorities in order. Visit, observe, ask questions, find out, and the help! You might surprise yourself and enjoy the positive experience.

Great event! Animal control staff did an outstanding effort! Thanks