The Oconee County Board of Commissioners decided back in 1999 that a key piece of property along what is now Old Mars Hill Road should not be rezoned for commercial use because it would adversely affect nearby Oak Ridge subdivision.

Commissioners on Aug. 25, when they delayed action on a proposal to spend an additional $140,000 on the project, voiced concern about the impact of the project on residents of Oak Ridge subdivision and others in the county.

On the initiative of Board of Commissioners Chairman Melvin Davis, the county already has spent nearly $10,000 on the project.

The meeting on Tuesday night begins at 7 p.m. at the Community Center in Veterans Park on Hog Mountain Road.

In recognition of the possible creation of a four-way intersection at Barber Creek Drive and Old Mars Hill Road with the new Mars Hill Road, county consultant Bill Ross has designated the Aycock property as appropriate for future commercial development.

The Board of Commissioners in 1999 turned down a request by the former owner of one of Aycock’s four properties to develop it for a business park and veterinary clinic because that use was inconsistent with the residential character of the area.

Since that rezone request in 1999, the county created what is now called the Oconee Connector. Beshara said that work was completed in 2000.

As part of that project, the county made Mars Hill Road intersect with the Connector opposite Daniells Bridge Road and then turn south to Butler’s Crossing.

The widening of Mars Hill Road from SR 316 to Butler’s Crossing, now underway, will put additional pressure on the Mars Hill Road corridor, which at present is still largely residential.

The intersection of Mars Hill Road with Daniells Bridge Road and the Connector already has a QuikTrip, and three others properties are being advertised for commercial development.

While Aycock has been identified as the land owner most likely to gain from creating Old Mars Hill Road as a cut through of that intersection, another land owner also will benefit.

Paul Keller and JJMB LLC own 3.6 acres at the southwest corner of the Mars Hill Road/Daniells Bridge Road/Oconee Connector intersection.

Existing maps indicate that property will not have access to the new Mars Hill Road.

By reopening Old Mars Hill Road, the county would be giving the Keller and JJMB property access to Mars Hill Road via the reopened cut through.

Jamie Bosswell, commercial real estate broker and area representative to the Georgia Transportation Board, which has responsibility for the Mars Hill Road project, is listing that property for Keller and JJMB.

On the initiative of Davis and with the acquiescence of County Administrative Officer Jeff Benko, County Public Works Director Emil Beshara approached Moreland Altobelli Associates in February with plans to change the design for the roadway.

Beshara told the commissioners that the state would not go forward with the plans without a commitment of at least $115,000 for construction work. The county will have to spend another $15,000 on its own, he said.

The commissioners balked, saying they needed to know how the public felt about the expenditure and the alteration of the long-published plans before agreeing to spend the money.

Georgia Department of Transportation plans going back to at least 2008 show the Old Mars Hill Road intersection remaining closed to through traffic.

County purchasing guidelines require a requisition and purchase order with two competitive verbal bids for goods and services costing between $750 and $4,999.

For services between $5,000 and $9,999, the county requires a requisition and purchase order with two competitive written bids.

For goods and services of $10,000 or more, the county requires a requisition and purchase order after a formal sealed bid or proposal process.

But the county already has a contract with Moreland Altobelli, and the $9,991.60 will be tucked into that existing contract.

The Board of Commissioners approved a change order for work from Moreland Altobelli on the first phase of the widening project on Aug. 5 of 2014.

That change order added $30,720 to the existing contract, which covers work from SR 316 to Butler’s Crossing.

The full cost of the existing contracts with Moreland Altobelli is just under $2 million, covering costs for design and related work from SR 316 to the U.S. 441 bypass.

Beshara told the Board on Aug. 25 that the $30,720 change order may have enough extra money in it to cover the work already done for the redesign of the proposed Old Mars Hill Road and Barber Creek Drive intersection.

But if that is not the case, the county is obligated to pay the difference.

County Administrative Officer Benko told the BOC the county has unspent money from the Special Purpose Local Option Sales Tax of 2004 to pay this amount plus the additional costs of the proposed interchange.

The expenditures, however, were not part of the Fiscal Year 2015-2016 budget passed by the Board of Commissioners in May. That budget went into effect on July 1.

I have created a timeline for the changes proposed to the property on what is now Old Mars Hill Road going back to April of 1999.

The most recent dates come from documents obtained from the county through an open records request.

Those documents show the persistence of BOC Chairman Davis in pushing the changes requested by Aycock and possibly by others and the willingness of Administrative Officer Benko to go along with them.

They also show the caution of Beshara in making the request for the changes. Beshara also reported a lack of interest on the part of GDOT in the proposed redesign.

But that lack of interest changed sometime in May or June.

Beshara advised Benko to tell Davis to contact GDOT to bring about the change, but the records do not indicate if Davis did that.

Below the timeline are two maps that show the intersection as proposed by GDOT.

These indicate that the property owned by Keller and JJMB will have no direct access to Mars Hill Road without the changes being pushed by Davis.

Click on any of the timetable charts or the maps to enlarge them. 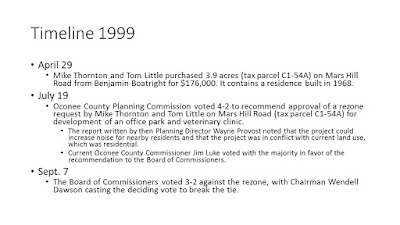 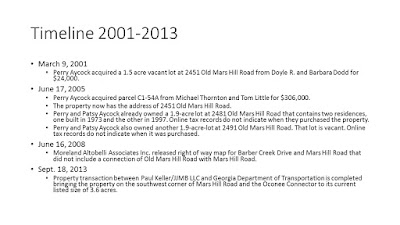 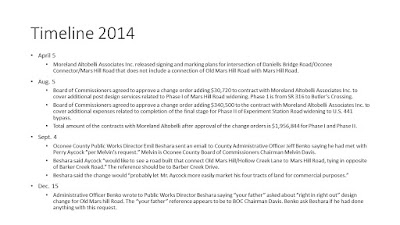 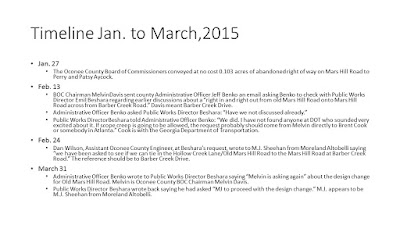 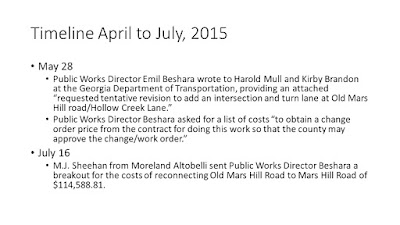 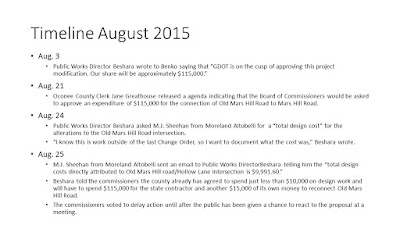 Sort of reminds you of how Obama runs the country -- do whatever you want to and then get acquiescence, not permission. Alas, uninformed voters in both cases are enabling.

This re-connection of old Mars Hill Rd. to Mars Hill Rd. issue to benefit few is exactly the problem type citizens will continue to face along Mars Hill Rd. with this proposed "overlay" zoning district in which wording states to PROTECT subdivision quality FROM adversity such as commercial development with noise, additional traffic, etc. Who are they kidding? This entire road reconstruction project is becoming fraught with mystery. Who supports the idea that commercial development in someone's backyard as positive? Only the property owner requesting such, not anyone of the BOC members as they don't live nearby this one and will remain personally unaffected.
If the Old Mars Hill Road intersection is redone again, it will be the fourth time in the last 20 or so years. "How to waste many tax payers' dollars to benefit few" seems to be the quest. Melvin Davis is clearly not following the County's purchasing guidelines. Can he be trusted to chair the county's business?
Jamie Boswell's position is in conflict - he should check with NAR's Code of Ethics and Standards of Practice ( http://www.realtor.org/sites/default/files/handouts-and-brochures/2015/2015-COE-Poster.pdf) about proceeding with representation of both Keller/JJMB and the Georgia Transportation Board.

Jamie Boswell might as well be a county commissioner. Boswell and Melvin make all the decisions 'round here.

The ways Mr. Davis can manipulate the budget requirements is amazing. I feel very sorry for the folks along Mars Hill Road. Spending so much taxpayer money to benefit just a few people makes no sense at all. These particular Republicans don't pay much attention to us general taxpayers as we elect them anyway.