Those who called for change only got a bit more than a quarter of the votes in each of the contested elections.

The vast majority of the citizens, however, didn’t cast a ballot, as turnout among registered voters was only 28.9 percent.

That means that the winners of the elections were explicitly endorsed by about two in 10 of the county’s registered voters, with another seven in 10 endorsing them by not voting at all.

If any of those seven in 10 wanted changed, they didn’t care enough about it to vote for it.

Yet an analysis of votes at the precinct level shows some evidence that, in the Board of Commissioners race at least, the issues in the campaign got at least a small amount of traction.

Oconee County is divided into 13 precincts of differing physical size and with unequal numbers of residents.

Since all races are run county-wide, the precincts are designed to make it easy for voters to get to the polls, not to allocate voters equally.

Across all 13 precincts, turnout was low, but it was lower some places than others and highest in three key precincts: Annex, Civic Center and Athens Academy.

Those precincts are important because Calls Creek flows between Annex and Athens Academy precincts, and the under-reconstruction Mars Hill Road runs through Civic Center.

The chart below shows the higher turnout in these three precincts, as well as in several others, including High Shoals. The results are based on the provisional data released by the state at the end of the data on May 24. (Click the charts to enlarge them.) 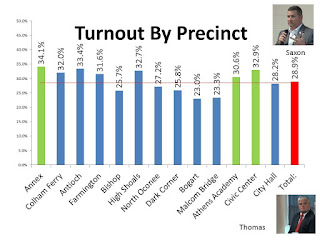 More telling than the comparison of the simple turnout rates is the chart below, which shows how the precincts “performed” in terms of the election outcome versus what was expected given their relative size. 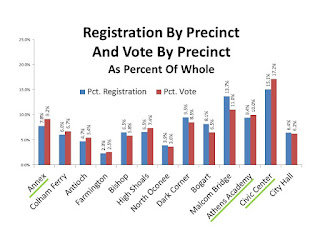 The Annex also “outperformed” by more than a percentage point. Athens Academy, another large precinct, also performed better than expected if every precinct were equal in terms of turnout.

Bogart was another “underperformer.” Neither precinct has been the center of development controversy in recent years.

In the Board of Commissioners races, both Mills and Bell spoke out against the sewer line proposed to run down Calls Creek that has many in neighborhoods along the creek riled up.

And both Mills and Bell criticized the pace of development in the county, with Mills in particular voicing criticism about disruption caused by the widening of Mars Hill Road.

The chart below shows that both Mills and Bell outperformed their overall vote totals of 27.7 percent and 27.6 percent respectively in Annex, Athens Academy, Civic Center and City Hall, which includes much of Watkinsville.

The Watkinsville precinct lies at the center of the cluster of Annex, Athens Academy and Civic Center. 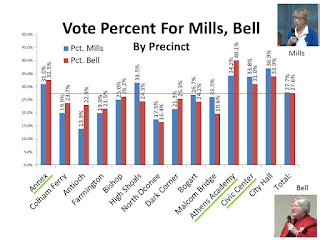 Mills also did better than average in High Shoals.

Kevin “Chappy” Hynes did best among the nonincumbents, getting 28.7 percent in his race against Sheriff Scott Berry. (Official results put the figure at 30.4 percent.)

Hynes’ message was a mixture of praise for Berry and a call for change in the Sheriff’ Office.

The chart below shows that Hynes did better than average in Annex, Athens Academy and Civic Center, but he also did better in a group of small precincts at the south of the county: Colham Ferry, Antioch and Farmington. 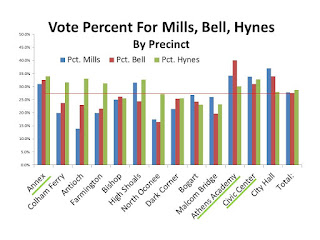 The protest vote of Mills and Bell is restricted to the precincts at the center of growth issues, suggesting that Hynes and the two commission outsiders were reaching at least slightly different audiences with their messages.

Dale Rogers got only 26.4 percent of the vote in his challenge of incumbent Ed Carson in the race for Coroner.

Britt Beaver got 26.5 percent of the vote in the race against incumbent Tom Odom for the chair of the Oconee County Board of Education.

Patricia Daugherty got only 23.3 percent of the vote in the county against incumbent Bill Cowsert in the race for the 46th District Senate seat.

Daugherty’s total across the whole district, which includes Walton and Clarke counties, was 23.8 percent.

I have used the election eve results in the analyses above. Late today, the county released the official results, with provisional ballots, and it put the turnout at 30.8 percent, not the 28.9 percent I used here. Those results were marked for 4:15 p.m.

The state site web site also includes the provisional ballots, and it puts the turnout at 28.9 percent. That report is marked at 5:13 p.m.

The only change in results for the individual candidates, was for Hynes. As noted, Hynes' figure went from 28.7 percent to 30.4 percent in both the official county results and on the web site.

For the March 1 presidential primary this year, 53.7 percent the county’s voters went to the polls.

That means that voters are more interested in expressing their views about the future president of the United States than in selecting the candidates who run their schools, rezone the properties that surround them, or provide local law enforcement services.

Early voting for the first two weeks it was possible was running ahead of early voting in February for the March election.

Both Mills and Bell did a little better with the early voters than on election day.

Regardless of how the data are viewed, the incumbents did extremely well when the election figures were counted.

The BOC races make the point.

Thomas ran as an incumbent, talking about his service on the School Board and on the Industrial Development Authority and his family’s long history in the county. Saxon was a first-term incumbent and made it clear that he feels the county is headed in the right direction.

Among all of the registered voters in the county, Mills’ total is only 7.4 percent, and Bell’s is 7.5 percent.

Thomas got 19.3 percent of the voters in the county to cast a ballot for him, and Saxon got 19.7 percent.

If one adds in those who didn’t vote, Mills and Bell got fewer than 1 in ten of the voters to accept their criticisms of the county for the Calls Creek sewer line, for rapid development, and for a lack of transparency and openness in government.

That is a strong endorsement for the status quo, and it seems certain that those who want things to proceed as they have in the past will read it that way.

How about a very subjective and non-mathematical analysis of a couple of the races:
Sheriff.....All the celebrity endorsements, robo-calls and mass mailings do not equate to law enforcement results and experience. Berry has proven time and again that he and his Department are results oriented and effective.
BOC.....Voters have now rejected Sarah Bell 3 times. The message here is that occasional grandstanding at BOC meetings and pandering to a group without all the information at hand, does not equate to votes. Sarah needs to concentrate on being a substitute videographer.
BOC.....Penny Mills is a nice lady and a life-long Democrat who tried to wrap herself in Republican clothing. She also tried pandering to a group, and she unfortunately does not understand tax-base diversification.

Thanks, Lee, for your interesting analysis.
The previous commenter raises the interesting question of tax diversification. However, I don't recall that tax was much of a feature of any of the campaigns.
And if this tax diversification was so beneficial should our tax rates continually fall. Seems more like it is causing our tax rates to have to up?

The challengers had uphill battles against perception,
a testament to satisfaction creating complacency.
There is much to like here in our county.
What there is not to are problems coming down the pike.

Great point Xardox. I agree. When the perception is that everything is fine you get the low voter turnout that we saw on the 24th. Complacency is not leading....complacency is not handling problems. I think we saw that in all races---sadly there was some opportunity for positive change. More of the same now and when these problems arise, it will be interesting to see how the status quo handles them---since they gave no indication that we even had problems at the forums.

I coomend Penny Mills and Sarah Bell for their willingness to run. Most of us don't have the courage or determination to do so, even those of us who vote in every election. We need opposition candidates so that we have discussion of the issues and a choice at the ballot box. I hope either these 2 ladies or others will step forward in the future. Win or lose, we all benefit by challengers to the status quo.