Wallace won strongly in the Clarke County part of the evenly split 119th District, ending with 56.7 percent of the votes in the unofficial tally--enough to avoid a runoff on Dec. 5.

Democrat Deborah Gonzalez dominated voting in Clarke County, giving her 53.1 percent of the votes in the 117th, which, in addition to Clarke County and Oconee County, includes parts of Barrow and Jackson counties.

The special elections were called when Republicans Regina Quick and Chuck Williams resigned to assume a Superior Court judgeship and the directorship of the Georgia Forestry Commission, respectively

The results indicate that the Republican-dominated Georgia General Assembly in its 2011 redistricting session underestimated the power of Clarke County to control the election outcome in the two districts. 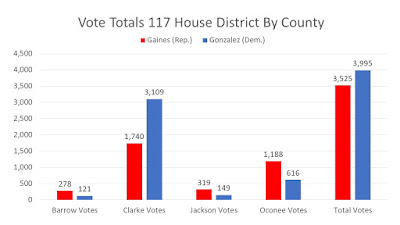 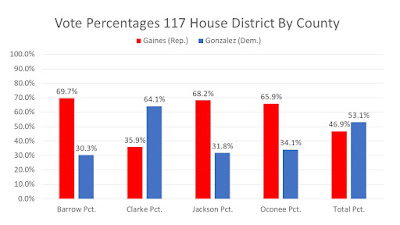 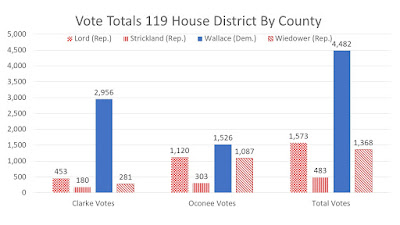 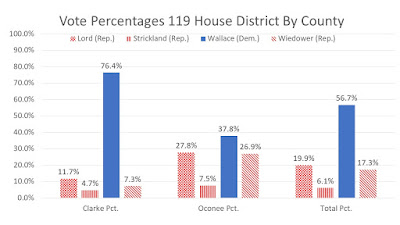 With all of the precincts in the 119th counted, Wallace had 76.4 percent of the vote in Clarke County and 37.8 percent in Oconee County.

Republican Marcus Wiedower had 7.3 percent of the vote in Clarke county and 26.9 percent in Oconee County, for a total of 17.3 percent.

In the Watkinsville race, Massie, who is serving out the term of the late Charles Ivie, got 64.2 percent of the vote to 35.4 percent for Wade LaFontaine. Massie will return to her old Post 2 position on the Council.

Turnout in Oconee County was 23.2 percent, which was higher than early voting suggested would be the case.

Turnout in Clarke County also was high, where the T-SPLOST referendum was on the ballot. The turnout rate was 21.9 percent, and T-SPLOST was approved by 73.9 percent of the voters.

Turnout was on 6.1 percent in Barrow County and 16.3 percent in Jackson County.

House District 117 had been created out of a historically Democratic district in Clarke County, and the parts of Barrow, Jackson and Oconee counties were added to make it more Republican.

House District had been created out of a district that had been dominated by Oconee County and was Republican. The parts of Clarke County were added with the expectation that Oconee County would still dominate.

Those assumptions proved to be incorrect in voting for this election.

Gonzalez is an attorney who lives in Clarke County and Wallace is a software developer from Oconee County.

Gaines also is from Clarke County, and Lord, Strickland and Wiedower are from Oconee County.

Gonzalez and Wallace will fill out the terms of Quick and Williams, respectively, and will have to run for full terms in May of 2018.

Gonzalez and Wallace will join the General Assembly for the session starting in January.

Wallace did much better in early voting in Oconee County than on election day, with 48.1 percent of the votes cast before Nov. 7. His final vote figure was 37.8 in the county.

Gonzalez had 34.2 percent of the votes cast in early voting, or nearly the same as her final vote of 34.1 percent

Hi Lee- where did you get the precinct level numbers? thanks

Congratulations are due to the Democrats.
Your organization, Get Out To Vote, and loyalty to Party worked very well.
I am jealous.

Fighting Democrat,
Sorry to be slow in responding. I obtained the precinct data from the Oconee County Board of Elections and Registration, but they should be online at the state site as well.
Lee

I think Oconee county can thank the legislature for their little redistricting stunt a few years ago to help Doug McKillip. Backfired on them then and us now. It took us a lot of years to get out from under Athens-Clarke County's thumb and now we're back. Look at the numbers, if the county still had one district we would have elected someone more like most of the county residents. Also, try to shop in Oconee so we won't be paying for their so called transportation improvements.

Thanks for your compiling the information. I have a question. I'm not sure if this is correct but view this quote from another news source:

Are these numbers correct? What do you think they mean?

Anonymous,
In the Nov. 8, 2016, vote, Quick received 18,374 votes, as you state, and Williams received 19,055 votes. Neither had opposition, and the election was one that had the presidential race on the ballot. So turnout was much higher. Certainly it is possible to argue that each received more votes than did the winners last night. But the circumstances are rather different.
Lee

The largest percentage of TSPLOST for Athens/Clarke is for local road improvements. The second most is for the Firefly Trail. Trails such as this benefit property values and quality of life measurements. Unfortunately this trail will bypass Oconee County and go through Oglethorpe, heading toward Union Point. If Oconee County wants a trail system along the abandoned railroad (as John Daniel suggested recently), a TSPLOST will also be needed here. We should be open to this as our population grows.

The reason the Democrats won is simple: TSPLOST pulled Athenians to the polls, whereas Oconee residents had no big-ticket ballot item. Combine that fact with strong organizational efforts on Democrats side, plus a fractured Republican vote between 3 Republican candidates, and it naturally allows for an Athenian-based advantage.

Also, Zippity: what abandoned rail line? Do you mean the old Norfolk Southern rail line that comes down Barnett Shoals, thru Watkinsville,and travels down 441? If so, that is not going to happen. Norfolk Southern has long term plans for that line, and they are not going to allow it to be a trail. Any trail will have to be designed from scratch and purchased from private property owners.