Citizen members of the Stakeholders Committee working on an update to the Oconee County Comprehensive Plan have received a draft of the plan for review that makes a number of changes to the county’s land use map.

Included in those changes is an increase from 12 to 20 in the number of Character Areas for the county.

The character areas specify the kinds of development expected in the designated area and thus have the potential to alter land use in the county in the future.

The draft plan also designates the intersection of Hog Mountain Road and U.S. 78 in the west of the county as a future Civic Center, which allows for a high-intensity mix of businesses, retail shopping, offices, sports and recreational complexes.

Overall, the proposed 2018 land use map is not radically different from the one adopted in 2010, and it isn’t clear whether the suggested changes will satisfy those on the citizen committee who have advocated for spreading commercial development around the county.

The draft document is the creation of Justin Crighton, a planner with the Northeast Georgia Regional Commission, based on input from members of the 29-person Stakeholders Committee and on the results of two opt-in, online surveys.

Sandy Weinel, acting director of the Oconee County Planning and Code Enforcement Department, circulated the draft to members of the Stakeholders Committee on Nov. 21 so the group would have a chance to review it before its next meeting on Dec. 6.

That meeting, scheduled to begin at 6:30 p.m. at the Community Center in Oconee Veterans Park, is the first meeting of the full Stakeholders Committee since September.

In the interim, subcommittees dealing with Land Use, Parks, Recreation and Greenspace, and Transportation and Infrastructure have met and reacted to parts of the draft document.

Crighton has asked a representative of each of the three subcommittees to make a report to the full group at the meeting on Dec. 6, explaining the deliberations that have led to the creation of the draft document.

The Dec. 6 meeting is open to the public, but the public will not have a formal chance to respond to the draft document until it is finalized by the Stakeholders Committee.

Ultimately, the Oconee County Board of Commissioners must approve the Comprehensive Plan.

The plan is a joint one between the county government and the county’s four cities, each of which has a representative on the Stakeholders Committee.

Weinel sent out the draft document at 9:21 p.m. on Nov. 21, in response to a request from Stakeholder Committee member Daniel Marks.

Weinel copied me and Michael Prochaska, editor of The Oconee Enterprise, in that email.

The draft document contains the proposed land use map, which is below. (Click on it to enlarge it.)

The legend to the map lists 19 of the 20 proposed new Character Areas.

Left off is Parks/ Recreation/Conservation. 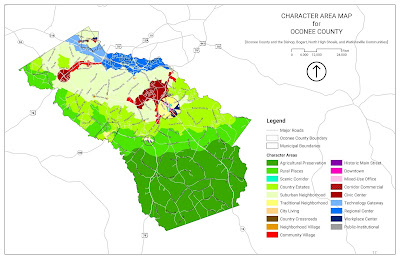 The map from the 2010 Comprehensive Plan is below. (Click on it to enlarge it.) 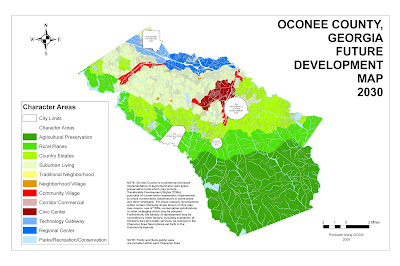 A number of Committee Members voiced concerns with the heavy concentration of commercial development in the Epps Bridge Parkway corridor and stated a desire to spread development more evenly around the county.

For some on the Committee, this concern about the Epps Bridge Parkway development is focused on the lack of greenspace, the difficulty of walking from store to store, even in Epps Bridge Centre, and traffic congestion.

For others on the Committee, the desire simply is to open up additional areas in the county for commercial and residential development.

The 2010 Comprehensive Plan was protective of the rural nature of the county, and the Board of Commissioners has used water and sewer services as a way of restricting development to the north of the county.

Crighton early on conceded that the intersection of Hog Mountain Road and U.S. 78 was prime for development, given that the Board of Education is building a new elementary school on Hog Mountain Road west of U.S. 78 almost at the Barrow County line.

Crighton proposed that the intersection be changed to Civic Center from Community Village Center. The latter allowed for developments that integrate and link together a higher-intensity commercial, residential, and recreational uses.

The Country Crossroads Character Area would allow small commercial areas that offer limited local convenience goods and services to the adjacent single-family and farming communities at historic crossroads in the rural and agricultural areas of the county.

The proposed land use map designates parts of Farmington in the far south of the county as a Country Crossroads Character Area.

Whether these changes are going to be enough to satisfy the pro-growth and spread-it-around-the-county voices on the Stakeholders Committee remains to be seen.

The draft report states that “more park space at all scales is needed” and calls for neighborhood pocket parks, an additional large-scale multi-sport complex as well as an aquatics center.

The county should connect new and existing parks and greenspace “to the community with trails, sidewalks and other off-street facilities,” the draft report states.

The plan also calls for a multi-use trail network to connect to other trail networks in the area and to the Oconee and Apalachee rivers.

The county needs to find “increased funding to pay for expansions and upgrades in staff, operations, programming, and maintenance,” according to the draft report.

“Where appropriate,” the draft states, the county should “increase capacity of road network in a strategic way that can help guide growth.”

It does not mention the widening of U.S. 441 or a possible Bishop Bypass.

It notes that water and sewer expansion determines future growth and the county should act according.

The county should “Encourage service providers to offer service to rural residents when installing or upgrading fiber or other broadband technology that utilizes public right of way,” according to the draft document.

Nice map. Cool colors and graphics, more "Character Areas."
It sure took a lot of study, work, meetings, and input.
It was asked as the FIRST question at the FIRST candidate forum to fill the seats on the BOC, What authority does this beautiful map have?
Not much. It's still all merely "a suggestion."
Since each and every building project needs some kind of okay at the Court House, each and every vote or decision is, at this point, not legally bound by this otherwise impressive effort.
In the Republic in which we live, we get what we vote for.