A standard feature of the regular meetings of the Oconee County Board of Education is a report from Chief Financial Officer Saranna Charping on the collections from the Education Local Option Sales Tax.

Charping’s report on the sales tax on Monday showed a sharp increase in sales tax revenue in December of 2017, but that followed months of slow growth and three months where revenue in 2017 was lower than a year earlier.

The report often is followed by questions from Board of Education member Tim Burgess, and Monday’s meeting was no exception.

Board member Wayne Bagley followed Burgess on Monday with an observation of his own.

Given the expected growth in online sales, Bagley said, “it is a concern” that the Oconee County School system is depending on the sales tax revenue “as a tool for capital funding in the future.”

The school system is engaged in an aggressive building program that includes an $8.6 million expansion of Oconee County High School and $13.2 million for construction of the new Dove Creek Elementary School in the far west of the county.

Those projects are funded by the Education Local Option Sales Tax.

Charping’s report on Monday covered only the last 14 months, and it showed $730,188 collected in December of 2017, the last month of collection for Education Local Option Sales Tax IV, or ELOST IV.

It also shows declines from the year earlier in March, April and May, with the March decrease over a year earlier of 17.6 percent.

I re-computed all of the percentages in the table released by the school system, checked the outcome by computing changes based on the calculated percents, and used my recomputed percentages above.

Revenue for ELOST comes from a 1 percent sales tax in the county approved by voters for educational capital projects.

Burgess told Charping that “For the last six months, things seem to have moved back in the right direction and closer to what we would have expected and what we do expect, compared to six or eight months before that.”

He asked Charping if she had “any feeling, any thoughts on what has happened to change that trend line from what we saw earlier in the year to the last six months?”

Charping said she could only offer “speculation,” and she said it is possible people are not shopping more and that more of their shopping is done online, with at least part of that escaping state sales taxation.

“Things certainly are headed back in the right direction,” Charping said. “But I feel cautious as to whether this will continue.”

Oconee County Schools have collected $32,320,173 from ELOST IV, which is short of the cap of $33 million that had been put on the tax, Charping said.

She told Burgess that, as far as she knew, the shortfall had not resulted in any cuts in spending for projects that voters were told would be covered by ELOST IV.

Bagley pushed Charping again for information on the effects of online sales on collection for ELOST IV.

“Have you been hearing anything or reading any periodicals or articles about how that (online sales) might affect sales tax in the future if we continue to have ELOST beyond V?” Bagley asked. ELOST V collections are underway.

Charping said the goal is to get people who make purchases online pay local sales taxes.

“And then you know we still have the same issues that we have part of the county that has an Athens Zip Code,” Charping said. “I think that is a way that they (the Georgia Department of Revenue) recognize what county you’re in--by Zip Code.”

The county has long feared that revenue from its commercial corridor on Epps Bridge Parkway is going to Athens-Clarke County rather than to Oconee County.

The Department of Revenue refuses to provide data on tax returns that addresses that concern.

“I was more concerned about online sales because I know if it is out of state they pay no sales tax at all,” Bagley said. “Hopefully we can stay on top of that and our next governor will take care of that for us.”

I downloaded ELOST Reports from the Board of Education to track ELOST receipts starting in January of 2013, the first month for which tax revenue were collected for ELOST IV.

Those monthly revenue figures are plotted in the line chart below. (Click on the chart to enlarge it.) 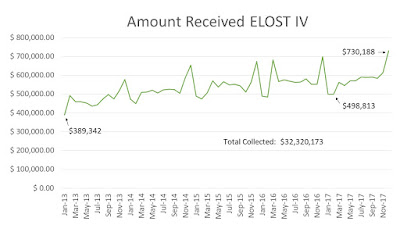 The chart shows that in the first month of ELOST the school system collected $389,342, compared to the $730,188 collected in December of 2017, the most ever collected in a month for the tax.

The chart shows variability by month, with December producing the highest revenue.

Generally, sales tax revenue falls off in the first months of the year, following the strong holiday sales.

An anomaly is March of 2016, which also produced high revenue and explains why March of 2017, a more normal month, showed such a sharp decline from a year earlier.

Overall, the pattern is for growth across the five years of the tax, but the increase is modest, given the growth in the economy and the continued commercial development in Oconee County during the period.

Inflation also reduces the real purchasing power of the money collected, as construction and other capital costs are increasing.

That is a growth of 19.5 percent across the four years, rather than a growth rate of 26.4 percent, if the inflation adjustment is not made.

In other action at the Monday (Feb. 19) meeting, the Board of Education agreed to spend $81,997 in ELOST monies for audio enhancement technology at the new Dove Creek Elementary School.

The contract was with Dooley Education Systems of Atlanta, whose bid was higher than two other bids, and Burgess asked Claire Buck, school system chief academic officer, to explain the recommendation.

Buck justified the decision based on the experience of Dooley Education Systems and the technology used.

The Board also approved a quit claim deed to transfer .763 acres from the Dove Creek school site to the county for construction of a water tower.

The new elementary school is under construction on Hog Mountain Road between Osborne Road and Dewey Road near the Barrow County line.

The land to be used for the water tower is at the rear of the school property on Dewey Road at V.M. Osborne Road.

The video of the Feb. 19 Board of Education meeting is below.

Charping began her report at 29:44 in the video.

The comments of Burgess and Bagley followed Charping’s report.