A pipeline for a private water company has caused contractors to switch construction of a pressured sewer line leading from Epps Bridge Parkway to the Calls Creek wastewater treatment plant to the east side of a section of Daniells Bridge Road.

The change in construction plans will result in a three-day closure of Natalie Drive, which is an entrance to Welbrook Farms subdivision, the Oconee County Water Resources Department announced on Friday.

Welbrook Farms residents will be forced to use a second subdivision entrance at Anne Drive on Chestnut Hill Road from April 30 through May 2 while the contractor installs the sewer line beneath the deceleration and acceleration lanes where Natalie Drive meets Daniells Bridge Road.

Original plans called for placement of the sewer line on the west side of Daniells Bridge Road, but that was before contractors realized that the sewer line would be too close to a private water line along that side of the road.

Griffin Brothers Inc. of Maysville has a $1.9 million contract for the upgrade of the pressured sewer line from Epps Bridge Parkway at Parkway Boulevard to the Calls Creek plant on the north side of Watkinsville. 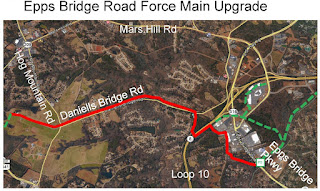 The existing line runs under Epps Bridge Parkway at Parkway Boulevard and then follows Tanglebrook Drive to a sewer easement along a creek that links to the roadway through Pinewood Estates mobile home park.

It then follows Old Epps Bridge Road to the Oconee Connector stub behind Home Depot.

From that point, the line crosses under SR Loop 10 and connects with Daniells Bridge Road at Chestnut Hill Road.

The existing line flows down the west side of Daniells Bridge Road to Hog Mountain Road and then down Government Station Road to Lampkin Branch of Calls Creek, where it connects to a gravity line running to the Calls Creek plant.

The new 12-inch PVC pipe was to be put down beside the existing 6-inch forced main pipe.

Jimmy Parker, a senior vice president of Precision Planning Inc. of Monroe and a consultant to the county on the sewer line project, said the plans had to be modified because of the “unknown location of a private water main within the westerly right-of-way of Daniells Bridge Road.”

The private water line belongs to Piedmont Water Company of Atlanta, Parker told me in an email message on Thursday. Piedmont had provided water to Birchmore Hills subdivision before it switched to county water.

“Per Georgia EPD standards, a minimum horizontal separation of 10 feet must be provided between water and sewer facilities,” Parker wrote. EPD stands for the Georgia Environmental Protection Division.

Because of the location of other existing utilities within the westerly right-of-way, maintaining the required 10-foot separation is not possible on that side of the road, Parker wrote.

At that point the force main will cross back under Daniells Bridge Road and run along the westerly right-of-way as originally designed.

Contractors will be able to bore for the 45 linear feet needed to cross the pipe under Daniells Bridge Road.

Much of the work on the sewer line is complete, and the contract end date for the project is July 3.

I live in Welbrook Farms subdivision.