An average of more than 700 Oconee County voters has cast a ballot in the first seven days of early voting for the Nov. 6 elections.

If that daily average holds in the remaining nine days of early voting, 41.5 percent of the county’s registered voters would have cast a ballot in early voting

In 2014, the last comparable year in the election cycle, 24.4 percent of the county’s then 22,526 active registered voters participated in early voting.

The projected high level of participation in 2018 compared with 2014 could be due to a higher level of interest in the current campaign and ultimately higher voter turnout, to a stronger preference for early versus election day voting this election year, or a combination of the two.

Brian Kemp, the Republican candidate for governor and an Athens native, will be attempting to further stir up local interest next week when his campaign bus tour makes a stop at 10 a.m. on Oct. 29 at the Pavilion at Oconee Veterans Park, 3500 Hog Mountain Road.

In a nonpartisan event on Thursday, Rep. Deborah Gonzalez of Athens from the 117th House District, which includes parts of Oconee County, and Sen. Renee Unterman of Buford from the 45th Senate District will participate in a Human Trafficking Awareness Forum.

The trafficking forum, which runs from 6 to 9 p.m. at Oconee County Civic Center, 2661 Hog Mountain Road, includes a survivor of trafficking and Lt. Deanna Smith of the Oconee County Sheriff’s Office. The forum is being organized by the North Oconee Rotary Club.

A total of 808 voters cast their ballots on Friday of last week at the Board of Elections and Registration Office, 10 Court Street, across from the Courthouse in Watkinsville. 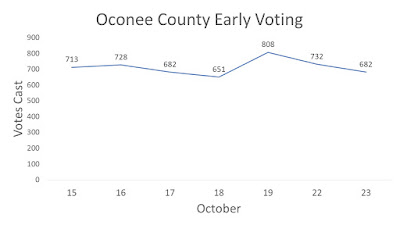 In early voting for the May 22 primaries and nonpartisan judicial contests, the peak day of early voting was the final day, when 509 persons cast a ballot.

The total number of early voters in the May primary was only 2,713, or about half of the number already cast in early voting for the Nov. 6 election.

The Board of Elections and Registration office also will be open for early voting on from 9 a.m. to 4 p.m. on Saturday, Oct. 27.

Inactive voters are eligible to vote, though their status reflects their lack of participation in recent elections.

Based on the present rate of early voting, it is very likely that early voting is going to be a larger part of total voting this year.

Good to see all of us Dems voting early and often!