Republican Brad Raffensperger got 67.1 percent of the vote in Oconee County in the runoff for Secretary of State on Tuesday, up just slightly from his 66.8 percent vote on Nov. 6.

Democrat John Barrow received 32.9 percent of the vote in Oconee County on Tuesday, up from the 30.7 percent he received in the three-way contest on Nov. 6.

In the Public Service Commission race, incumbent Republican Chuck Eaton received 68.1 percent of the vote in Oconee County on Tuesday, down from the 69.4 percent he received on Nov. 6.

Democrat Lindy Miller received 31.9 percent, up from the 27.3 percent she received in the three-way race on Nov. 6.

Only 9,092 of Oconee County’s 27,538 active, registered voters participated in the runoff election, or 33.0 percent, compared with the 75.5 percent who cast a ballot for the Nov. 6 election.

Voter who cast a ballot at the county’s 13 precinct polling places on Tuesday made up 59.4 percent of the total electorate for the runoff. 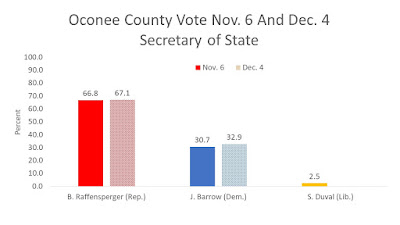 Another 36.9 percent of the voters cast a ballot in the five days of Advance In Person voting at the Board of Elections and Registration Office across from the Courthouse in Watkinsville.

Absentee By Mail made up 3.7 percent of the total vote.

Results are incomplete because 187 absentee ballots mailed out by the Board of Elections and Registration have not yet been returned.

If those ballots are postmarked for Tuesday and are received by the end of the day on Friday they will be counted.

In addition, three voters filled out provisional paper ballots at the polls on Tuesday. Those will be counted if they are found to be by properly registered voters.

Raffensperger got his highest percentages in Dark Corner and North Oconee in the northwest of the county. 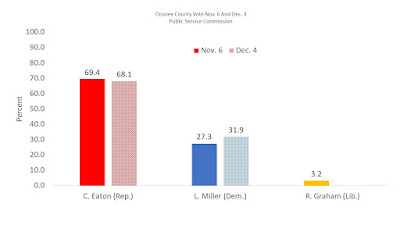 His lowest percentages were in City Hall and Athens Academy in the northeast. Raffensperger got only 55.7 percent of the vote in City Hall.

The picture was much the same for Eaton, who did best in Dark Corner and North Oconee and worst in City Hall and Annex.

(Click either of the charts above to enlarge it.)

Appreciate the in-depth analysis not found anywhere else.