Enrollment In Oconee County Schools Increased This Year, But At Lower Rate Than Recent Years, School Board Told

The census of enrollments in Oconee County Schools this fall showed 8,170 students attending the system’s 11 schools, an increase of 1.8 percent over the year earlier.

In his report to the Board of Education on Monday, Brook Whitmire, chief Human Resources officer, noted that the growth in enrollments was “a little bit less than what we’ve seen in the last few years.”

In each of the five years from 2004 to 2008, fall enrollments increased more than 3 percentage points over the year earlier.

Whitmire told the Board in his report that the system had hired 63 teachers for the new school year, down from 85 hired for the beginning of the 2018-2019 academic year.

Race and ethnicity data for the school system show that 80 percent of the students classified themselves as White, the same percentage as in the last three beginning-of-the-year counts.

In response to a separate report on Monday by Brock Toole, school chief Operations officer, School Board members continued to raise questions about the decision by the Board of Commissioners to construct roundabouts at the entrances to Oconee County Middle School.

Whitmire told the Board that “we go and physically count students” enrolled in the Pre-K through 12th grade programs to obtain the data for the census.

Anisa Sullivan Jimenez, director of Communication, subsequently provided me with the actual figure and the comparable data going back through 2010, shown in the chart below. 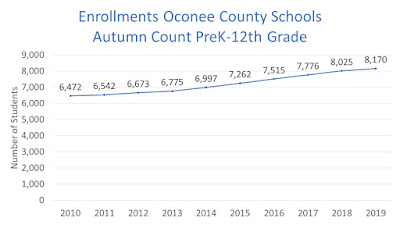 The system had added 249 students a year earlier, for a growth rate of 3.2 percent.

Enrollments grew by 3.5 percent the two years before that. Growth was 3.8 percent in academic year 2015. 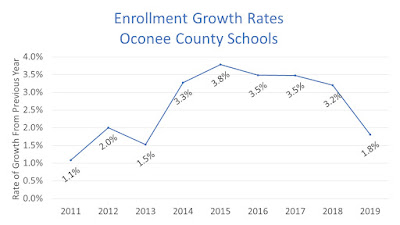 In 2010, Oconee County Schools enrolled 6,472 students. The enrollment of 8,170 students this fall represents a growth of 26.2 percent over the decade.

On Sept. 3, Jimenez had provided me with the racial breakdown of the students enrolled in the Oconee County Schools.

These data come from the enrollment forms filed out by the parents for the students.

The School System does not break out “Hispanic” as an ethnic classification, as is done in the U.S. Census. In the U.S. Census, a person can be of any race and also classified as Hispanic.

In 2010, the percentage of students in Oconee County Schools classified as White had been 84, as it was a year later. That figure dropped to 80 percent in 2016.

The Oconee County Long-Range Transportation Plan, dated March of 2019, used the same racial and ethnicity classification approach for Oconee County residents as is used in the school system enrollment forms.

That Plan lists 85 percent of the county’s residents as White in 2015, compared with 81 percent in the county’s schools.

Whitmire told the Board that the 63 new teachers hired for the 2019-2020 school year includes teachers from 19 different school districts in Georgia. Clarke County contributed the most new hires, with nine, followed by Gwinnett County with eight.

Whitmire said that 10 of the new employees were former graduates of Oconee County Schools.

“We’ve had another fantastic hiring season,” Whitmire said, “and just have welcomed some terrific teachers.”

Chief Operations Officer Toole updated the Board on construction of the roundabouts on Malcom Bridge Road during his report to the Board.

Toole said his office had been in contact with Oconee County Public Works Director Jody Woodall and held meetings with other county officials in recent weeks.

Survey work for the roundabout at Malcom Bridge Road and Mars Hill Road is commencing, Toole said, and construction of the roundabout is to be completed by Oct. 31.

The Oconee County Board of Commissioners approved a $1.3 million contract with ER Snell Contractor Inc. of Snellville for the Mars Hill Road and Malcom Bridge Road roundabout in June.

Toole said Carter Engineering, 3651 Mars Hill Road near U.S. 78, is preparing bid documents for the roundabout at the bus and staff entrance to Malcom Bridge Middle and Elementary School and that these are expected to be before the Board of Commissioners for action in October.

The roundabout at the parent entrance also had been discussed, Toole said, but nothing has been finalized.

Toole reminded the Board that the proposed roundabout at Lenru Road and Malcom Bridge Road is no longer being considered.

Toole told the Board that at the recent meetings with county officials, “No other alternate solutions were discussed other than the proposed roundabouts. No plans were available for us to bring back to the office for further review.”

“So let me make sure I heard you correctly,” Board member Wayne Bagley said to Toole. “They haven’t offered or even asked us for any alternatives that affect the schools? It’s all basically been given to us as this is the way we’re going to go. Is that correct?”

“That is correct,” Toole said.

“So the other alternatives would be like a decel lane or a traffic light?” Board member Kim Argo asked. “That’s never come up?”

“We’ve actually briefly discussed the traffic signal,” Toole said. “But they do this analysis and it didn’t warrant a traffic signal. We have made–spoke of--decel lanes, but no alternative solution has been offered by them.”

During the recognitions section of the Board meeting, the Board gave certificates to three sport groups from North Oconee High School.

During his comments at the meeting on Monday, Superintendent Jason Branch told the Board that all county buses are now air conditioned and invited the Board and others present to tour one of the county buses following the regular session of the meeting.

Toole, in his report to the Board, also said that all of the retrofitting of school buses to install air conditioning has been completed.

I took advantage of Branch’s invitation and made a short video of my tour, guided by Toole.

The bus on display is a new one, not one of those retrofitted with air conditioning. It was one of six purchased last year, Toole said.

The plans is to purchase six buses each year, Toole said. None of the 84 buses in the system at present is more than 20 years old, he added.

The bus holds 72 passengers, the largest number accommodated by buses in the system, according to Toole.

Seat belts for passengers are only installed in the smaller special education buses, Toole said.

The video below is from the Aug. 9 meeting of the Board of Education.

The recognition section of the video begins at 3:38.

Whitmire began his presentation at 16:54 in the video.