Citizen feedback on the draft MACORTS 2045 Metropolitan Transportation Plan was wide-ranging, but positive comments on the inclusion of bike and pedestrian facilities on road projects, particularly in Oconee County, were dominant.

The Technical Coordinating Committee of MACORTS, the federally mandated metropolitan planning organization for the region, received a summary of the feedback before approving the draft 2045 Metropolitan Transportation Plan at its meeting on Wednesday morning in Athens.

The feedback came from three public meetings held on Sept. 9 and 10 and from public comments received during the 30-day comment period that ended on Sept. 17.

The Plan now goes to the MACORTS Policy Committee, which will meet Oct. 9 in the Public Meeting Room in the Madison County Government Building in Danielsville.

The Technical Coordinating Committee also received an update on the proposed high speed passenger rail line from Charlotte to Atlanta.

The Georgia Department of Transportation is seeking feedback on the environmental impact statement for three different routes for the rail line, one of which would pass through Athens.

Sherry McDuffie, transportation planner with Athens-Clarke County and MACORTS, offered the summary of the public comment on the draft of the 2045 Metropolitan Transportation Plan to the Technical Coordinating Committee at its meeting on Wednesday morning.

Both bicycle and pedestrian “facilities” have been added to Hog Mountain Road from Mars Hill Road in Butler’s Crossing to U.S. 441.

Similarly, both bicycle and pedestrian “facilities” were added to Daniells Bridge Road from its intersection with Mars Hill Road and the Oconee Connector to Hog Mountain Road.

The meetings in Athens-Clarke County and Madison County were held on Sept. 10.

“All improvements to enchance bike and pedestrian safety are fantastic,” one person wrote at the Sept. 9 meeting in Oconee County. “If possible, bike paths separate from the road are best.”

Among the comments received during the 30-day open period, 12 offered support for inclusion of bicycle and pedestrian facilities, with seven supporting the changes to Hog Mountain Road and Daniells Bridge Road specifically.

(I live in Welbrook Farms subdivision off Daniells Bridge Road, and I had sent a note to my neighbors advising them of the two posts I did about the MACORTS plan.)

Two comments were in support of the two-laning of Hog Mountain Road from Butler’s Crossing with bike and pedestrian facilities, and one person wanted the road widened to four lanes.

One person said the 2045 Metropolitan Transportation Plan should include a roundabout at New High Shoals Road and Union Church Road, and another wanted a connector road between SR 15 and U.S. 441 south of Watkinsville.

McDuffie told the Technical Coordinating Committee that said MACORTS had gotten a call from the Georgia Department of Transportation “a couple of weeks ago.”

“We’re taking baby steps on commuter rail,” she said. “We finally made a baby step in this process.”

McDuffie said that GDOT and the Federal Rail Administration have been working on the draft environmental impact statements for high speed commuter rail connecting Charlotte and Atlanta.

The draft identifies three corridors that are being considered, McDuffie said.

GDOT has not named a preferred alternative, McDuffie said, and won’t do that until there is public comment.

The public comment period is for 45 days, ending on Nov. 4. GDOT also will hold a public meeting in Atlanta from 5:30 to 8 p.m. on Oct. 22 at the Georgia Department of Transportation, 600 W Peachtree St NW, Atlanta.

McDuffie said she was told by GDOT that it hopes to have a preferred alternative by the end of the calendar year.

The map released by McDuffie shows one route, identified as the Crescent, running through Taccoa and Gainesville on its way to Atlanta. 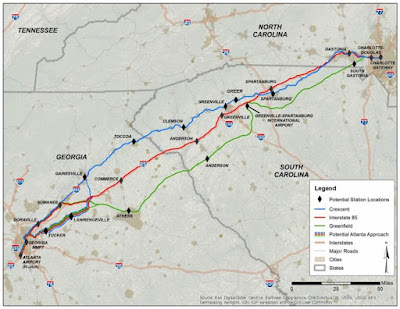 The second route, called Interstate 85, follows that highway through Commerce.

The third route, labeled Greenfield, passes through Athens. It would be mainly on new dedicated rail right of way, according to the GDOT web site.

The Greenfield route runs north of Bogart and does not cross into Oconee County, according to the maps on the GDOT web site.

Funding at this point for moving beyond the environmental impact statements “hasn’t been identified at this point,” McDuffie said.

The three possible routes are part of a Southeast High Speed Rail corridor that would link to proposed high speed rail from Washington, D.C., through Richmond and Charlotte and then to Atlanta, according to the GDOT web site.

The Atlanta terminus for all three routes is Hartsfield Jackson International Airport.

The Technical Coordinating Committee on Wednesday also approved an amendment to the Fiscal Year 2018-2021 Transportation Improvement Program to move into the 2020 construction schedule improvement to the SR Loop 10 interchange at Lexington Road.

That action also will be before the Policy Committee next month. Construction is expected to take about two years.

The video below is of the Sept. 25 meeting of the MACORTS Technical Coordinating Committee.

Discussion of the 2018-2021 Transportation Improvement Program is at 0:45 in the video.

Discussion of the draft 2045 Metropolitan Transportation Plan begins at 3:02 in the video.

Discussion of the high speed rail project is at 05:18.

Where can we find more about this rail line? This would be a great boon to the county.

If you click on the GDOT website next to the map, you'll go to the site where additional information is provided.

Thank you for providing easy links to the materials and the survey. I hope eventually we will have high speed rail as the traffic on I85 is increasingly heavy. It would be so much better to be able to take a train.