Tax Collections From The Education Sales Tax Down Again In August Compared With Year Ago, Oconee County School Board Told

Tax collections for the Oconee County Education Local Option Sales Tax were down more than 2 percent in August compared with August of last year, marking the fifth time in the last six months that the education sales tax revenue had been lower than a year earlier.

Over the first 20 months of the current tax, called ELOST V, the average monthly change over a year earlier remains positive at 7.8 percent, but the trend line since October of a year ago has been negative.

Saranna Charping, chief financial officer for Oconee County Schools, released the most recent tax collection data at the regular Board of Education meeting last week, but she did not comment on the negative trend, and no member of the Board made note of it.

Charping also reported that the ELOST account currently has a little more than $6.2 million available for debt service and that $38.3 million budgeted for ELOST projects has been spent.

At the end of the recognitions section of the meeting, the Board honored Superintendent Jason Branch, who has been named recipient of the Georgia School Superintendents Association Bill Barr Leadership Award.

In her report to the Board, Charping presented data on collection for the education 1 percent sales tax going back through July of 2018.

I used data from earlier Charping reports to build the chart below. Click on the chart to enlarge it. 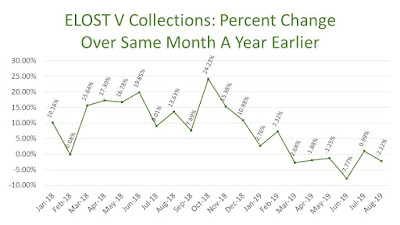 The comparison was negative in March, April, May and June, slightly positive in July, and negative in August, the most recent month for which data are available.

The school system received the August collections in September.

Charping reported that ELOST V has produced $12.8 million in revenue as of the end of September. The tax is projected to produce $39.9 million during its five year duration.

The Board of Education borrowed $23.5 million against those revenues and is due to make payments of $6.1 million during calendar year 2020. It has made only $1.3 million in payments up to this point.

Total bond payments will be $25.9 million.

As of the end of September, the school system had $6.2 million available to make those payments.

At the meeting on Oct. 21, the Board voted to spend $284,940 in ELOST V funds to cover part of the costs of four new 84-passenger buses and two special education buses from Peach State Freightliner.

Charping also told the Board as part of her financial report that by Oct. 8 the school system has spent $20.3 million, or 25.8 percent of the $82.3 million budgeted for the fiscal year that began on July 1.

During the recognitions section of the short meeting on Oct. 21, the Board saluted the Oconee 4H State Winners, AAAA State Track and Field athletes, the Georgia High School Association Cooperative Spirit Sportsmanship Award for North Oconee High School, and members of the Superintendent's Student Advisory Committee.

At the end of those recognitions, Board Chair Tom Odom announced that Superintendent Jason Branch had been selected as the Bill Barr Award Winner by the Georgia School Superintendent Association.

“He is very deserving of this, and we’re very proud of him and certainly for efforts that he exhibits in our school system and in and around the Association and the state,” Odom said. “We’re deeply grateful for all of those efforts.”

Anisa Sullivan Jimenez, director of Communications for Oconee County Schools, had sent out a news release on Oct. 16, announcing the selection of Branch for the Bill Barr Leadership Award. The Superintendent Association had met Oct. 16 and 17 at the Classic Center in Athens.

The award is named for and designed in honor of the first executive director of Georgia School Superintendents Association.

Branch was nominated for this award–unbeknownst to him–by several of his colleagues from across the state, according to the news release.

The award recognizes a superintendent for leadership excellence within his or her school system, as well as in the mentoring of other superintendents or those aspiring to the superintendency, the news release states.

Branch has served as superintendent in Oconee County Schools since 2012.

The video below is of the Oct. 21 meeting of the Board of Education.

Recognitions begin at 1:28 in the video.

Odom made his comments about Branch and the Bill Barr Award at 10:12 in the video.

Charping made her presentation to the Board at 31:35 in the video.

Maybe this award will bring job offers with it.


Thank you, Dr. Becker, for the statistics and evaluation of the Education tax revenue collection downturn. This maybe one of the most important articles of the year.

What are we spending and how much do we have in revenue is imperative as we as a county move forward.

Bob Smith’s political ad in the Oconee Enterprise questioning spending may be a prelude to the challenges governments have in the future. I do not feel our local elected officials (county level) have been concerned. Fixed income and families will be hit hard if taxes are increased to give politicians more money to spend.

This is an article to save for future reference.