***Expansion Will Not Provide Residential Sewer***

Oconee County commissioners are likely to consider before the end of the year doubling the treatment capacity of the Calls Creek Wastewater Treatment Facility on the northeast of Watkinsville.

The county is talking with the Georgia Department of Transportation about the decision by the state to funnel all of the traffic from an expanded U.S. 441 south of Bishop through the city and about the importance of that transportation corridor for the county.

Oconee County Board of Commissioners Chair John Daniell made these comments about the county at the meeting of the Oconee County Republican party last Monday as part of an update on the State of the County.

Jennifer Riddle, Oconee County Tax Commissioner, and Tom Odom, chair of the Oconee County Board of Education, also gave updates as part of the program.

Jonathan Kirkpatrick, a candidate for Post 2 on the Watkinsville City Council, made a nonpartisan pitch for support of those present.

Kirkpatrick said he supports careful management of city finances and stressed his access to citizens were he to be elected.

“It’s been a very, very exciting last three years since we took over in 2017,” Commission Chair Daniell told the 27 people in the audience as he began his comments on Oct. 28. He was elected to the Board as chair in 2016. He followed Riddle and Odom in speaking on the State of the County.

Daniell listed accomplishments of the Board since assuming office, including a number of road projects.

The bid for the widening of Experiment Station Road from Butler’s Crossing to the U.S. 441 bypass is expected to be let in January of 2021, Daniell said, with construction to start shortly after that date.

Daniell said he expected the state to take bids in the first of next year for the extension of Bishop Farms Parkway from Experiment Station Road to New High Shoals Road.

The University of North Georgia wants to expand, Daniell said, and it cannot do that with only the single entrance to the campus on Experiment Station Road.

Daniell said the county has a request for proposals out for construction of Internet infrastructure in the county and there has been a lot of interest on the part of commercial firms who want to partner with the county.

“In short, the state of your county is strong and our future is bright,” Daniell said in closing his comments.

Amry Harden said he was disappointed to learn that the Georgia Department of Transportation had decided not to build a bypass of Bishop and wanted to know “what are you and other commissioners doing to get this back on track.”

“We’ve having conversations with DOT every chance we get to talk about the importance of the corridor,” Daniell said. “Some of the problems they’re facing they just can’t deal with right now.”

“We are having conversations with them and work that through,” he said.

In response to a question about sewage capacity, Daniell said “there is no residential sewer capacity, and we don’t anticipate there being any for a while.”

Even with the plant expanded to 3 million gallons per day, “when you look at the capacity that was promised in the early 2000s, we will still be over our allocated amount for residential sewer,” Daniell said.

“In 2018, we were telling businesses they could not attach to sewer,” Daniell said, until the plant was upgraded to its current 1.5 million gallons capacity.

Daniell said the county is reserving its capacity for business so it can diversity the tax base. At present, 61 percent of the property tax revenue comes from residential properties, and Daniell said it wants to get that figure below 50 percent.

Tax Commissioner Riddle was the first to speak on the State of the County, and she said her office has gone through a change of its computer system within the last year, moving from a DOS-based system to a Windows-based system.

The change was state-wide, through the Georgia Department of Revenue, she said, and it has made it easier for her office to provide services internally and for its customers.

Riddle said the county has a high collection rate of 97 percent. About 35 percent of the properties in the county have their taxes held is escrow, so her office gets large checks from lending institutions for those properties, she said.

Odom followed Riddle and said the School Board Chair is “not a politicized office. It is one where you want to serve and help students become better and help their parents support their students in a way that we all would like to have happen.”

Odom said he was particularly proud of the initiative of the Board that has allocated a Chromebook computer for each student in the schools. The student can take the computer home, Odom added.

“For a child that doesn’t have the means, that’s a big deal,” Odom said.

Growth “is the biggest concern we have,” Odom said. The Board of Education does not control growth, he added, but it closely monitors building permits issued by the county to help it plan for the construction of schools.

Odom said the school system has developed its second strategic plan and is the first year of that plan.

“You’ve got to have a plan of action, folks, because if you don’t you have a fragmented approach to education,” Odom said. “You can’t have that. You’ve got to know where you’re going.”

“And I’m very proud of the Board of Education that we have now because I believe that we’ve got that good culture,” he said.

Steven Strickland, chair of the Oconee County Republicans, said he had extended an invitation both to Kirkpatrick and Connie Massey to speak at the party meeting after the formal program.

“I will endeavor to manage the city’s operating capital budget in a fiscally responsible manner and will ensure transparency in the spending of Special Purpose Local Option Sales Tax–SPLOST–funds,” Kirkpatrick said in his comments.

“I’m particularly interested in finding solutions to the mounting congestion problems within Watkinsville,” Kirkpatrick continued. “Working with city, county and state officials, I will strive not only to implement the recommendations of the city transportation study but to find forward-thinking solutions to our traffic woes.”

“When I’m elected, I will be available to you via multiple means,” Kirkpatrick said. “In person, by telephone, electronic messaging, email and social media. I will keep you informed of the Council’s work, ensuring transparency of our actions. Most importantly, I will be responsive to you.”

Despite the large number of candidate signs around the city and the large turnout at the Election Forum on Oct. 3, turnout in early voting for the Watkinsville mayor and council races as well as for the Brunch Bill question has been light.

Friday, the final day of early voting, had the largest number of ballots cast, with 46.

Fridays during each of the three weeks of early voting were the days of heaviest voting, as the chart below shows. 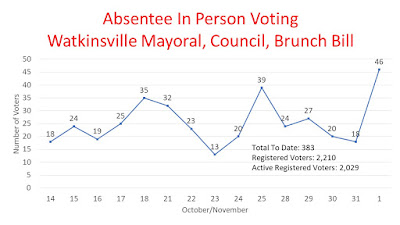 If the 383 votes cast in early voting represent half of those to be cast, total voting would be 766, or 37.8 percent of the total active registered voters in the city.

Oconee County Director of Elections and Registration Fran Leathers says she will use active voters as the base for calculation of turnout rates.

If the 383 votes cast represent 55 percent of those to be cast, as recent county-wide elections suggest could be the case, total votes will be 696, or 34.3 percent of the total active voters.

Of course, voting on Tuesday does not have to follow past patterns.

Riddle began her comments at 7:18 in the video.

Odom made his comments starting at 20:08.

HOLLEY DOWNS said...
This comment has been removed by the author.
6:46 AM


Odom showed the dedication of our Board of Education. A congrats to outstanding teachers, students and parents.

John Daniell focuses on his tyrannical approach to government with phrases such as “when we took over”. He follows with pronouncements of what will be done with no direction, oversight, or comments by taxpayers. County will wake up to a gigantic IOU in the near future.