***Board Of Education Candidates Agree To Virtual Candidate Forum***

The Oconee County Board of Education has sent a strongly worded letter to the County Commission complaining about the changes made to the staff and bus entrance to its Malcom Bridge Road school complex and rejecting all proposed changes for the parent entrance to Malcom Bridge Middle School.

The three-page letter, dated Aug. 21 but released to the public on Tuesday by Oconee County School Superintendent Jason Branch, is signed by all five members of the Board.

The letter follows, and relies on, a study by Breedlove Land Planning of Bishop and Atlanta presented to the Board of Education at its regular meeting on Aug. 10.

Matt Tanner from Breedlove Land Planning told the School Board at that meeting that he did not like any of the options being considered by the Oconee County Board of Commissioners for a redesigned parent entrance to Malcom Bridge Middle School and was critical of the completed bus entrance.

In the letter, the School Board members said “it has become clear that there was never a demonstrated, requested or urgent need for these changes” and that “The Board of Education's perspectives and opinions were never fully considered.”

“In the middle of a pandemic with all of the issues that the Oconee school system is trying to deal with to actually conduct this school year ......... this unnecessary road modification is simply not--and should not be--a priority,” the School Board members write.

In a separate development, all four candidates for the two contested seats on the Board of Education that will be on the Nov. 3 ballot have agreed to participate in a virtual candidate forum on the evening of Sept. 17.

“The purpose of this letter is to further clarify our position on the proposals and actions the Board of Commissioners have taken with respect to road modifications in front of the Malcom Bridge school complex,” the letter states.

“We, as a Board of Education, have been consistently clear and have voiced our opposition to these plans in terms of need, urgency, safety and design,” it continues.

The letter stated that the School Board “felt it prudent to engage a professional civil engineering firm, specifically with school operations experience, to review all of these changes.”

The letter summarized the Breedlove report, which said that a study conducted for the county in collaboration with the Georgia Department of Transportation had not identified the Malcom Bridge Road corridor as a priority for improvement.

The letter noted that Tanner had been critical of changes already made to the bus entrance and said that these changes have “had a visibly negative impact on traffic flow as a new school year has begun.”

“While you have previously indicated the desire to eliminate the need for a traffic control officer during the morning and afternoon traffic congestion,” the letter continues. “Breedlove confirmed our view that this in fact will not occur with your proposal for a modified R-cut with U-turn.

“The need for this officer will simply be moved to the U-turn to safely control the congestion and through traffic created at this point by this road modification,” the School Board letter states.

At the Aug. 10 meeting, Superintendent Branch said that he had asked Breedlove to do a Malcom Bridge Middle School Road Improvement Study at the request of the Board of Education.

That request was not discussed in a public meeting, and I filed an open records request on Aug. 12 asking “for the contract/agreement/correspondence with Breedlove Land Planning Inc. regarding the study of Malcom Bridge Road that spells out the scope of the work, the timeline, and the cost.”

Brook Whitmire, chief Human Resources officer for the school system who also serves as open records officer, sent me an email on Aug. 17 saying “There are no records currently in possession of the school district responsive to your request.”

Whitmire said an invoice from Breedlove would be “forthcoming” and he would provide that to me. He provided that on Aug. 21.

Breedlove submitted an invoice dated Aug. 19 for $4,647.50 to Oconee County Schools for its work on the study.

The invoice was for 38.5 hours of professional services, including 14 hour by “Principal,” 12 hours by a registered professional engineer, 1.5 hours by a technician, and 10 hours by an environmental designer.

Tanner had told the Board that he had spent time reviewing the county’s transportation study, which had been undertaken by a consultant selected by the Georgia Department of Transportation.

Jody Woodall, Public Works director for Oconee County, presented the Board of Commissioners last (Tuesday) night with a contract modification for work by E.R. Snell Contractor Inc. of Snellville on the completed bus entrance to the Malcom Bridge Road school campus.

The adjustment increases the costs of the project from $561,377 to $606,084 reflecting the addition of concrete not in the original contract and reconciliation of asphalt quantities, Woodall said.

The Georgia Department of Transportation contributed $300,000 of the project’s costs, according to County Administrator Justin Kirouac.

I have not received a reply from any of the five members.

On the advice of my doctors, I am staying home due to my vulnerability to the novel coronavirus.

I proposed yesterday (Wednesday) to each of the four candidates for the Board of Election races that I host a virtual candidate forum to allow them to introduce themselves to the public and answers questions from the public.

Tim Burgess is the Republican nominee for Post 4, which he currently holds.

Wayne Bagley is stepping down from Post 5, and Joan Parker is the Democratic nominee for that Post, while Michael Ransom is the Republican nominee.

Board Chair Tom Odom also is seeking re-election, but he has no opposition on the ballot in November.

I will provide access details and procedures for submitting questions as soon as possible. 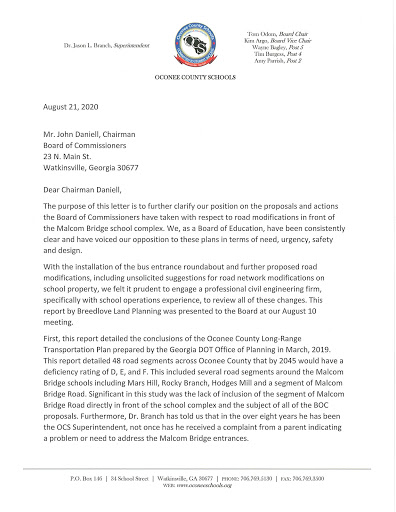 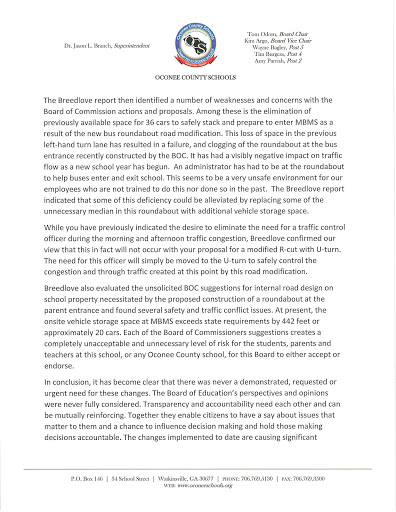 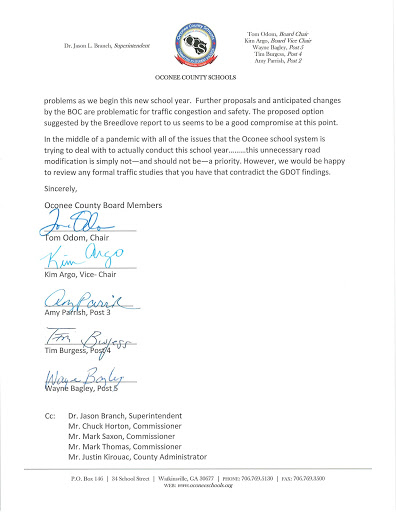