The Northeast Health District added 303 confirmed COVID-19 cases based on molecular tests with the release of the Department of Public Health Daily Status Report on Friday, the most cases added in a single day since Sept. 5.

The District also added 53 cases identified by antigen tests, which the Department of Public Health has been reporting only since Nov. 3.

The District also added two deaths from the disease and one death that the Department of Public Health listed as “probable,” meaning it is likely to have been caused by the disease.

The seven-day rolling average of added cases based on the molecular test on Friday was 190.7, up sharply from 165.0 on Thursday and the highest rolling average since Sept. 11.

Each of the 10 counties in the Northeast Health District added cases based on the molecular tests on Friday, with Oconee County adding 12 and Clarke County adding 69.

In both counties, the seven-day rolling average of added cases increased, with the new average of 11.7 cases added per day a new record in Oconee County.

With the two confirmed deaths added in the Daily Status, the seven-day rolling average of added deaths in the Northeast Health District remained unchanged on Friday at 1.1.

The Department of Public Health does not list characteristics of the "probable" death.

Almost all of the activity was at homes in Clarke County. Four of the resident cases and two of the staff cases were at The Oaks–Athens Skilled Nursing. Pruitthealth Athens Heritage reported a resident case and a staff case. The final staff case was at Park Place Nursing Facility in Walton County.

Oconee County Schools reported 13 Active COVID-19 cases on Friday, up from 10 when the school system last issued its COVID-19 Status Report on Nov. 20.

In addition, Oconee County Schools listed 29 individuals in Active Quarantine Due To Close Contact, down from 130 two weeks ago.

The announcement sent to parents indicated that the quarantine requirements have been modified to reflect the most recent guidance from the Centers for Disease Control and Prevention.

In the past, quarantines were for 14 days after exposure, now they are for seven days if the individual has been tested, received a negative test result, and does not experience symptoms during the seven-day period.

Individuals can discontinue quarantine after 10 days if the individual has not been tested and has not experienced symptoms for those 10 days.

Oconee County Schools does not release any information about the active cases, but parents at the schools where the cases occur receive a notification once the positive case has been identified.

The Daily Status Report listed 5,023 new molecular-test-confirmed cases of COVID-19 on Friday, the largest number ever reported and the first time the number has gone above 5,000.

In addition, the state reported 1,578 confirmed cases based on antigen tests. The combination of these two tests to produce 6,601 new cases suggests entry into an unprecedented stage of spread of the disease.

The seven-day rolling average of added molecular cases increased to 3,192.3 on Friday from 2,819.3 on Thursday.

The seven-day rolling average of added antigen cases increased to 1,226.7 on Friday from 1,102.1 on Thursday.

The state added 43 deaths in the Daily Status Report on Friday, and the seven-day rolling average of added deaths increased to 26.7 on Friday from 24.9 on Thursday.

Nineteen of those cases were in the last 14 days, and the seven-day rolling average of added deaths dated by occurrence also increased on Friday.

The Daily Status Report listed 34 new deaths that are probably the result of COVID-19, and the seven-day rolling average of added “probable” deaths increased to 24.1 from 21.3 on Thursday.

The number of COVID-19 patients is the highest it has been since Aug. 21.

The Department of Community Health reported COVID-19 cases among residents and/or staff at 666 long-term care facilities around the state on Thursday, the same as on Thursday.

All of the charts below are based on data from the Department of Public Health Daily Status Report and have been updated to include data from the release of that report at 2:50 p.m. on Friday.

Charts 1 and 2 include data from the 10-county Northeast Health District of the Department of Public Health, which includes Oconee and Clarke counties.

Chart 3 shows data for Oconee and Clarke counties in the main chart. The inserted chart is based on data from Oconee County Schools.

Charts 4 and 5 show data for the entire state of Georgia. 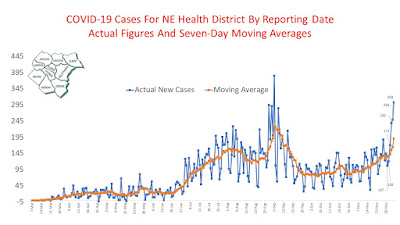 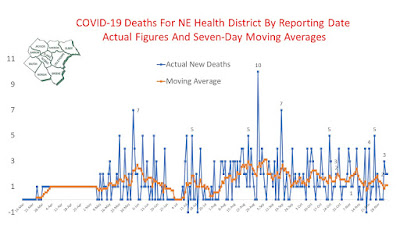 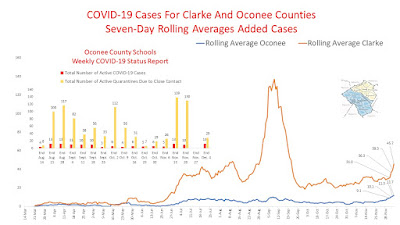 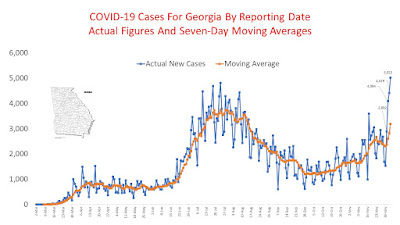 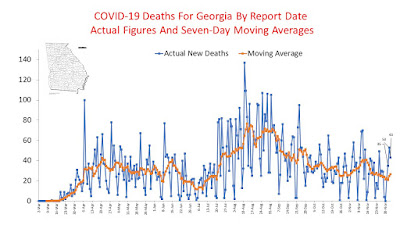 Thank you again, Lee, for doing all this even with the added complexity of antigen tests.

Thank you, Jeanne. Obviously, I need to start to combine these tests, but that means I would lose the long-term comparisons. So that means I need to do both. Not such an easy undertaking. But I'm working on it.
Lee