The Northeast Health District added 374 new cases of COVID-19 on Sunday, 361 of them confirmed via molecular tests and 13 of them the product of rapid, antigen tests, as well as one of the two deaths from the disease reported in the state.

The death was of a 79-year-old female in Barrow County without a known chronic condition. The listing followed a death in the county in Saturday’s Daily Status Report and was the 63rd in the county attributed to the disease.

The seven-day rolling average of added deaths in the District climbed just slightly to 1.9 on Sunday from 1.7 on Saturday. Sunday is a light reporting day, and the District didn’t have any deaths reported last Sunday and has had no death recorded on six of the last 13 Sundays.

In fact, in the 12 Sundays from Oct. 4 to Oct. 13, the District recorded nine deaths, but, when the deaths were sorted by date of occurrence, 12 of the 100 deaths in that time period were on a Sunday.

The addition of the 374 cases of COVID-19 pushed the seven-day rolling average of added cases to 387.1, a new record high.

The seven-day rolling average in Clarke County dropped on Sunday to 67.1 from 68.7 on Saturday.

Oconee County schools ended the fall term on Friday, but principals continue to send email messages to parents regarding identified cases of COVID-19 at the schools.

On Sunday, at 12:23 p.m., Colham Ferry Elementary School Principal Tony McCullers sent an email to parents of students in the school saying that “On December 20, 2020, we were alerted to an individual in our school who tested positive for COVID-19.”

At 6:05 on Sunday, Malcom Bridge Middle School Principal Mike Eddy informed parents that on Sunday “we were alerted that two individuals in our school tested positive for COVID-19.”

Across the state, the Department of Public Health in Sunday’s Daily Status Report added 5,828 COVID-19 cases, and the seven-day rolling average of added cases increased to 6,684.7, a new record.

The Daily Status Report added only two deaths, with one of those in Barrow County.

The seven-day rolling average of added deaths increased to 33.7 from 33.6 on Saturday. The Daily Status Report had added only one death last Sunday.

The Department of Public Health eliminated two deaths previously listed. It included no new “probable deaths” from the disease.

The number of COVID-19 patients is the highest ever reported since the data were first made available on May 1.

All of the charts below are based on data from the Department of Public Health Daily Status Report and have been updated to include data from the release of that report at 2:50 p.m. on Sunday.

Charts 1 and 2 include data from the 10-county Northeast Health District of the Department of Public Health, which includes Oconee and Clarke counties.

Chart 3 shows data for Oconee and Clarke counties on the left and for the entire District on the right.

Charts 4 and 5 show data for the entire state of Georgia. 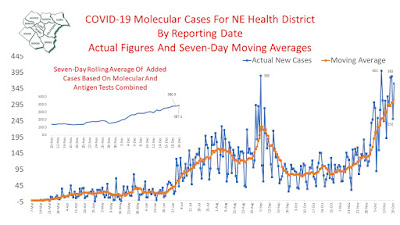 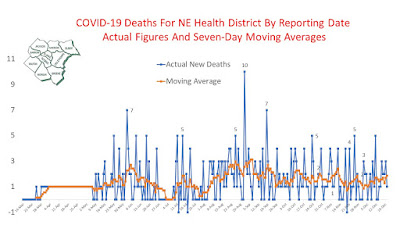 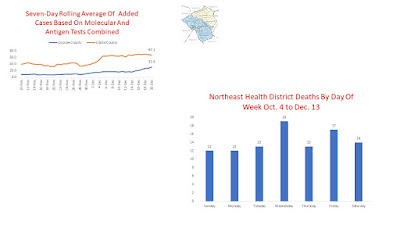 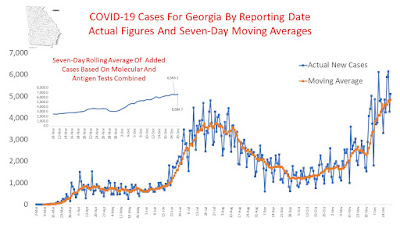 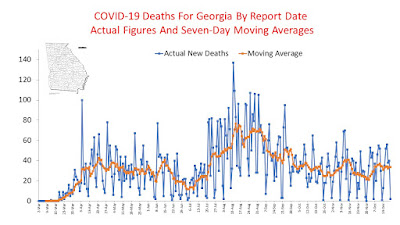 Looks like our good ol' Oconee County is about to surpass Clarke County's daily toll.

Who'd a thunk it.

Just maybe it confirms our 'no-mask', 'no-distance', 'no-worries' parade did its work. We should all be so proud!

A recent article was published by the National Vaccine Information Center, (originally published in January) titled "PCR Test for Coronavirus questioned by prominent scientists". In the article, the authors stated, "Our conclusion is supported by the fact that a tremendous number of very serious design flaws were found by us, which make the PCR test completely unsuitable as a diagnostic tool to identify the SARS-CoV-2 virus. " If this is true, then inaccurate testing means inaccurate reported numbers of Covid-19 cases and deaths, and no justification to declare a state of emergency. Is the Covid-19 virus more deadly than other viruses? The CDC has posted that US deaths have remained the same the past three years despite Covid-19.

John, it confirms NOTHING. First, you are assuming the numbers are correct. Also assuming any spread was from the parade. What if citizens went Christmas shopping that week and went to Walmart? Same wrong assumptions that "restaurants are main spreaders of covid." Tests aren't even accurate, so all numbers are inaccurate.

The CDC has a variety of dashboards presenting data on excess deaths. Here is a link:

CDC has lots of "data." I wouldn't believe much of it. You read through all the Covid symptoms, diagnosis claims? You may be false positive ...or false negative. They don't even know. It's a big mess. The tests aren't even accurate if they cannot isolate a strain of covid. And now, the CDC has lumped together all deaths for pneumonia, flu, and covid. So if they die from flu, it's lumped in with "covid" deaths. Also, if someone is in an accident and dies...if they tested positive for covid, (assuming it's not a false positive), they are reported as a covid death. All inflated numbers to keep the people fearful. Sad thing is...people still believe it.