***No New Deaths From Disease Reported***

The Northeast Health District added only 238 new cases of COVID-19 with the release of the Daily Status Report of the Department of Public Health on Monday, but the seven-day rolling average of added cases increased from Sunday.

Oconee County added 18 cases, and Clarke County added 44, and in both counties the seven-day rolling average of added cases increased.

The Northeast Health District did not add any new deaths, and the seven-day rolling average of added deaths dropped from 1.7 on Sunday to 1.4 on Monday.

Area hospitals have expanded their ICU capacity to handle the demand and now report having 74 beds available, rather than the usual 70.

The GMA data are reported as being current as of the beginning of the day on Monday. The data are for Region E of GEMA, which consists of the 10 counties of the Northeast Health District plus Hart and Franklin counties and has nine hospitals with emergency rooms. The largest and dominant hospitals with the vast majority of the beds are the two in Clarke County.

The Georgia Department of Community Health did not issue its Long-Term Care Facility Report on Monday. No explanation was given for the lack of a report. 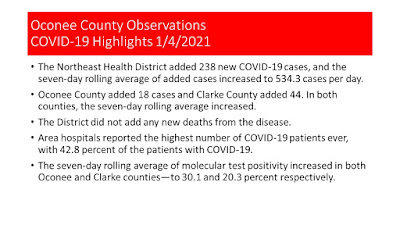 The Daily Status Report listed seven new deaths attributed to COVID-19 in the state, with six of them in the last 14 days.

The seven-day rolling average of added deaths increased to 26.7 on Monday from 26.4 on Sunday.

The Daily Status Report did not list any new “probable deaths” from the disease.

The Department of Public Health, however, now has a web site for vaccine distribution.

On Monday, the DPH site listed allocations, shipments and vaccinations for the state.

These data on vaccine distributions and receipt are not available on the CDC or Georgia Department of Health sites at the county level.

Diane Baggett, communication manager for Oconee County, said in an email message on Monday that the county does not have data other than those provided on the DPH site.

The charts below are based on data from the Department of Public Health Daily Status Report and have been updated to include data from the release of that Report at 2:50 p.m. on Monday. 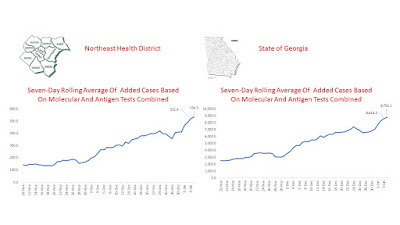