The Northeast Health District added 10 confirmed COVID-19 deaths in the Friday Department of Public Health Daily Status Report, bringing to 37 the number of deaths in the District added since Sunday and lifting the seven-day rolling average of added deaths to 5.9 from 5.3 on Thursday.

Three of the newly added deaths were in Clarke County.

The Department of Community Health also reported four deaths in the Northeast Health District in its Friday Long-Term Care Facility Report. That report has added 20 deaths at long-term facilities in the District since Sunday.

The Clarke County deaths in the Daily Status Report were of a 76-year-old female, a 78-year-old male, and a 79-year-old male, none of whom had a chronic condition. The deaths bring to 74 the number in the county listed as a confirmed COVID-19 death.

The Northeast Health District now has 467 confirmed deaths tallied in the Daily Status Report, and the seven-day rolling average of added deaths increased to 5.9 per day on Friday from 5.3 on Thursday.

Two of the four deaths listed in the Department of Community Health Long-Term Care Facility Report were at Nancy Hart Nursing Center in Elbert County. The other two were at Great Oaks personal care home and Park Place Nursing Facility, both in Walton County.

The 630 new COVID-19 cases listed in the Friday Daily Status Report are down from the 769 on Friday of last week, and the seven-day rolling average of added cases dropped to 567.3 on Friday from 596.1 on Thursday. 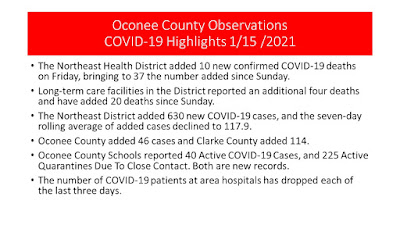 The seven-day rolling average has dropped each of the last two days.

The Department of Community Health listed 28 new cases of COVID-19 among residents of the Northeast Health District’s 40 long-term facilities covered by the Report, and 13 new cases among staff of those facilities.

Four of the new resident cases were at St. Mary’s Highland Hills Village, 1660 Jennings Mill Road, in Oconee County, and the others were at long-term care homes in Elbert and Walton counties.

One of the staff cases also was at St. Mary’s Highland Hills, and the others were at facilities in Elbert, Madison, and Walton counties.

The school system does inform parents at the individual schools of cases when they are discovered at the schools.

Those represent only 15 cases, or a small number of the 40 cases announced on Friday.

At 7:31 p.m. on Friday, after the Friday COVID-19 Status Report was released by the schools, Oconee County High School Principal Kevin Yancey sent parents an email saying that “Today we were alerted to three individuals in our school who tested positive for COVID-19.”

The number of COVID-19 patients has dropped each of the last three days.

The Daily Status Report listed 159 confirmed deaths from COVID-19 on Friday for the entire state of Georgia, the largest single-day gain going back to the beginning of the pandemic last March, and the seven-day rolling average jumped to 100.3 on Friday from 89.0 on Friday.

This is the first time the rolling average of added deaths has gone above 100. Over the last four days, the state has added 583 deaths attributed to the disease.

Seventy-six of the added deaths occurred in the last 14 days, and the seven-day rolling average of added deaths dated by occurrence also increased on Friday from Thursday.

The Department of Public Health eliminated two deaths from its archive of deaths from the disease.

The decrease in COVID-19 patients followed a drop on Thursday as well.

The Department of Public Health reported on Friday that 42,323 additional vaccinations had taken place since Thursday and that the total number of vaccinations in the state now is 368,379.

The 42,323 additional vaccinations are down slightly from the 42,879 reported on Thursday.

The vaccinations have been received by 3.4 percent of the state’s population.

Data on vaccinations are not available at the county level.

The Department of Community Health reported COVID-19 among residents and/or staff at 715 long-term care facilities around the state on Friday, the same as on Thursday..

Chart 1 below shows the seven-day rolling average of the addition of COVID-19 molecular and antigen cases for the Northeast Health District and for the state of Georgia since Nov. 3, when the state first began reporting antigen test results.

Charts 2 and 3 report actual deaths reported from the disease and the seven-day rolling average of added deaths.

The data come from the Department of Public Health Daily Status Report and have been updated for the 2:51 p.m. Report on Friday.