The Northeast Health District recorded seven confirmed deaths from COVID-19 and 651 new cases of the disease on Saturday with release of the Department of Public Health Daily Status Report .

The Daily Status Report listed the death of a 69-year-old female in Barrow County without a chronic condition, bringing to 87 the number of deaths from the disease in that county.

Elbert County recorded its 31st death from COVID-19, of an 80-year-old male with a chronic condition.

The Daily Status Report listed a death of a 68-year-old male in Jackson County with a chronic condition. The death was the 87th in the county from the disease.

The Daily Status Report also listed one death in Walton County labeled as “probable” in terms of it being caused by COVID-19. The Report does not include any information on the characteristics of “probable deaths.” 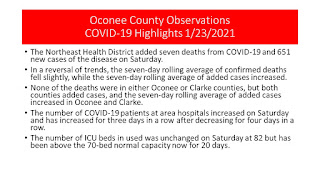 That rolling average had dropped for seven days in a row, ending with an increase on Thursday. The average then decreased on Friday before increasing again on Saturday.

The rolling averages of added cases in Oconee and Clarke also have been on a downward trend before turning up (if only slightly in Oconee County) on Saturday.

I have received notices from parents of two positive tests–at Malcom Bridge Elementary School and Malcom Bridge Middle School–since the official report of the schools on Friday afternoon.

The normal ICU bed capacity of area hospitals is 70, and the hospitals have reported exceeding that capacity every day since Jan. 3.

The Daily Status Report added 128 new confirmed deaths across the state of Georgia on Saturday, and the seven-day rolling average of added deaths dropped to 111.4 from 115.1 on Friday. On Saturday of last week, the state added 154 deaths.

Eighty-thee of the added deaths occurred in the last 14 days, and the seven-day rolling average of added deaths dated by occurrence increased sharply on Saturday. It has now increased five days in a row.

The Department of Public Health reported adding only 4,678 new COVID-19 vaccinations on Saturday, down from 55,362 on Friday, and the total number of vaccinations in the state is now 651,478. It isn’t possible to know how many of those are first versus second doses.

The state has been allocated 1,131,425 doses of the vaccine, and almost all of the allocated doses (1,125,525) have now been shipped. These figures are the same as on Friday.

The 651,478 administered doses represent 57.9 percent of the doses shipped. 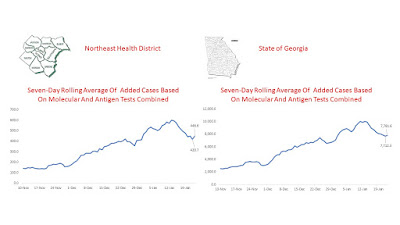