The Northeast Health District added a confirmed deaths from COVID-19 in Clarke County and in Walton County on Thursday, resulting in a very slight increase in the seven-day rolling average of added deaths in the District. The District also added 541 new cases of the disease.

Clarke County’s death was the fourth in three days listed in the Daily Status Report and brings to 67 the number of confirmed deaths from the disease in the county. The Walton County death brings to 89 the number in that county confirmed as attributed to COVID-19.

The total number of COVID-19 deaths in the 10-county Northeast Health District now is 420, and the seven-day rolling average of added deaths from the disease increased to 2.0 from 1.9 on Wednesday.

The Department of Public Health listed one new “probable death” from the disease--in Greene County. 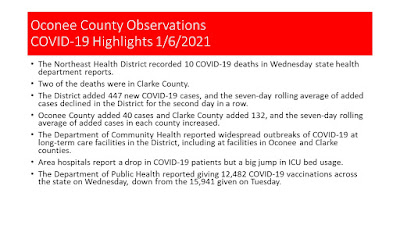 Oconee County added 43 new cases of COVID-19, and the seven-day rolling average of added cases dropped from 42.4 cases per day to 40.6 cases per day.

Clarke County added 112 new cases, and the seven-day rolling average of added cases in the county increased from 99.3 on Wednesday to 101.0 cases per day on Thursday. The Clarke County figure is the highest ever recorded.

The Department of Community Health, in is Thursday Long-Term Care Facility Report, listed 18 new resident cases of COVID-19 at the 39 long-term care facilities in the Northeast Health District and 13 new cases among staff.

Among the 13 new staff cases were three at Arbor Terrace of Athens and four at St. Mary’s Highland Hills Village in Oconee County.

Other staff cases were at facilities in Elbert, Greene, and Jackson counties.

Classes at Oconee County Schools began on Tuesday, and the first report on active COVID-19 cases and quarantines is expected to be released on Friday afternoon.

At 6:04 p.m. on Thursday, Malcom Bridge Middle School Principal Mike Eddy sent parents an email saying that another individual at the school has tested positive for COVID-19..

This is at least the sixth positive case in the schools since the beginning of the year and the second report in two days from Malcom Bridge Middle School.

Across the state, the Department of Health counted 65 new deaths attributed to COVID-19 on Thursday, and the seven-day rolling average of added deaths was 33.1, down from 33.6 on Wednesday.

Only 13 of those deaths were in the last 14 days. One of the newly added deaths was dated as occurring on June 20 and another was dated for Aug. 10.

The Georgia Department of Public Health reported that 135,605 individuals in the state have received a COVID-19 vaccine as of 5:15 p.m. Thursday, an increase of 12,575 vaccinations from Wednesday.

The state reported having received 553,925 doses of the vaccine on Thursday, up 42,900 from the day before.

The state is not releasing vaccine data at the county level at this point.

The Department of Community Health reported on Thursday that COVID-19 was present among residents and/or staff of 698 long-term care facilities in the state. That figure had been 698 on Wednesday as well.

The charts below are based on data from the Department of Public Health Daily Status Report and have been updated to include data from the release of that Report at 2:50 p.m. on Thursday.