The seven-day rolling average of added COVID-19 cases and deaths declined in the Northeast Health District on Monday as the Department of Public Health reported only 116 new cases and five confirmed deaths from the disease.

The confirmed deaths included a 59-year-old male in Clarke County without a chronic condition bringing to 98 the number of deaths in the county from COVID-19 since the pandemic began last year.

Greene County now has 38 confirmed COVID-19 deaths, Oglethorpe County has 19, and Walton County has 169, the largest number of any of the 10 counties in the District.

The Northeast Health District as a whole now has 659 confirmed COVID-19 deaths, and the seven-day rolling average of added deaths on Monday was 8.3, down from 8.6 on Sunday.

Mondays are light reporting days, and the District had added seven deaths on Monday of last week. On that day the seven-day rolling average was 10.6, the highest it has ever been.

With the listing of 116 new cases in the Monday Department of Public Health Daily Status Report the seven-day rolling average of added cases dropped to 248.9 from 250.1 on Sunday. The District had added 125 cases last Monday.

High Shoals Elementary School Principal Jennifer Whitaker sent parents of students in the school an email on Monday afternoon informing them that “an individual” in the school had tested positive for COVID-19.

Oconee County Schools provides an update on Active Cases and Active Quarantines only once a week, and Friday’s report had shown both cases and quarantines declining from the week before.

The Monday email from High Shoals Elementary was the second email parents have forwarded to me regarding “an individual” at a school since Friday. The other was at Malcom Bridge Middle School.

The Department of Community Health Long-Term Care Facility Report for Monday had not been released late on Monday.

Across the state, the Daily Status Report on Monday added 35 confirmed deaths from COVID-19, and the seven-day rolling average of added deaths fell slightly to 108.0 from 109.3 on Sunday. 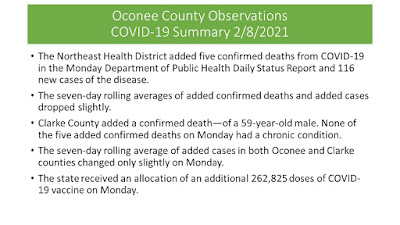 Fourteen of the 35 added deaths on Monday occurred in the lasts 14 days, and the seven-day rolling average of added deaths based on date of occurrence fell from Sunday.

The Department of Public Health listed three new “probable deaths” from COVID-19 in Monday’s Daily Status Report, and the seven-day rolling average of added “probable deaths” increased just slightly to 20.0 from 19.7 on Sunday.

The Department of Public Health reported administration of an additional 40,546 new doses of COVID-19 vaccinations on Monday, up from 12,197 on Sunday.

The data in the charts come from the Department of Public Health Daily Status Report and have been updated for the 2:50 p.m. Report on Monday.