With the addition of four COVID-19 deaths and 72 new cases of the disease, the seven-day rolling averages of added deaths and cases increased on Saturday in the Northeast Health District with the release of the Department of Public Health Daily Status Report.

The deaths bring to 866 the number in the District since the state began counting COVID-19 deaths in the beginning of February in 2020.

The Department of Public Health had added two deaths in the 10-county Northeast Health District a week ago, and the addition of the four deaths on Saturday resulted in an increase in the seven-day rolling average of added deaths to 4.1 from 3.9 on Friday.

The District also added two “probable” deaths, one in Elbert County and one in Morgan County, bringing to 81 the number in the District since February of last year.

The Daily Status Report does not include any information on the characteristics of the “probable” deaths.

With the addition of the 72 new cases, the seven-day rolling average of added cases in the Northeast Health District increased to 76.1 from 74.0 on Friday. 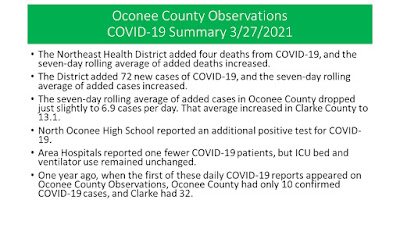 Philip Brown, principal at North Oconee High School, sent an email to parents of students at the school at 7:30 p.m. on Friday informing them that “an individual” at the school had tested positive for COVID-19.

Because the school administration does not provide any details on cases in its weekly COVID-19 Status Report released at 4:01 on Friday, it isn’t possible to know if the case referenced by Brown had been included in the count of 17 Active Cases and 83 Active Quarantines.

Both numbers were down from the week before.

The Department of Community Health does not release a Long-Term Care Facility Report on the weekends.

The Vaccine Distribution Dashboard of the Department of Public Health remained down on Saturday. These data have not been reported since Sunday.

One Year Of Daily Reports

On March 27, 2020, I posted the first of what has become a daily report on COVID-19 in Oconee County and the counties surrounding it. 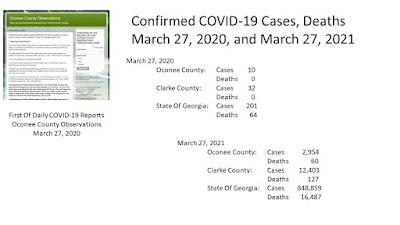 I had posted four reports before that report on March 27, starting on March 19, but I have not missed a daily update since March 27.

In that March 27, 2020, post, I reported 10 confirmed cases in Oconee County and no deaths. In Clarke County, the number of cases was 32, and there were no deaths.

In the state, according to the Daily Status Report of the Department of Public Health used for that post, there were 201 cases and 64 deaths on that date.

The data used in this post for Saturday show 2,954 confirmed cases in Oconee County and 60 deaths.

I did not set out to do a daily update. It just evolved, and I’m looking forward to stopping.

At first, there was little information available, and most of my time was spent trying to decipher what was available. It was spotty, poorly documented, and sometimes contradictory.

Across time, a great deal of information of a higher quality has become available, and I spend four to six hours or more each day sorting through those data looking for trends and new insights.

That initial post a year ago focused on Oconee, Barrow and Clarke counties.

Soon I realized that there was something called the Northeast Health District, with Oconee and Clarke counties literally at the center, and I shifted my attention to the 10 counties that make up that District since health care cuts across county lines.

The weakness of all of the reports is that they tell what happens each day and tell little–often nothing--about the trends. I have focused from the beginning on the trends, and each day I compare what is reported by the state and other agencies that day with what was reported the day before.

This is a tedious process.

My motivation for doing these reports is simple: I want to know what is happening for myself. No one else is focusing on Oconee and these other nine counties in the Northeast Health District.

I hope my sharing what I have learned has been of value to others as well.

The Daily Status Report added 71 confirmed COVID-19 deaths across the state on Saturday, and the seven-day rolling average of added deaths increased to 50.7 from 47.7 on Friday.

Seventeen of the added deaths occurred in the last 14 days, and the seven-day rolling average of added deaths dated by occurrence increased slightly on Saturday from Friday.

The Department of Public Health eliminated one death it had previously attributed to COVID-19 from its archive of deaths from the disease.

Across the state, the Department of Public Health added 1,522 new cases of COVID-19 on Saturday, and the seven-day rolling average of added cases decreased to 1,593.1 from 1,642.0 on Friday.