The Oconee County death was of a 69-year-old female without a chronic condition and brings to 62 the number of deaths in the county from the disease since the first was recorded in May of last year.

The Department of Public Health recorded the date of death added on Wednesday as Jan. 30, 2021.

The Department of Community Health on Tuesday reported the deaths of two residents at The Landing personal care home on U.S. 78 in the west of Oconee County, but those deaths occurred on Sept. 12, 2020, and Feb. 25, 2021, the administrator of the facility said on Wednesday.

The other confirmed death recorded in the Wednesday Department of Public Health Daily Status Report was of an 89-year-old female in Walton County without a chronic condition.

The Walton County death is the 226th in that county since the beginning of the pandemic.

The total number of confirmed deaths in the 10-county Northeast Health District now is 871, and the seven-day rolling average of added confirmed deaths dropped to 3.6 on Wednesday from 4.4 on Tuesday.

The District had added eight deaths on Wednesday of last week. 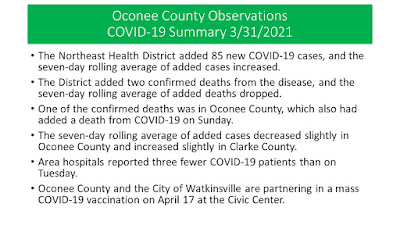 The addition of the 85 new cases of COVID-19 in the Wednesday Daily Status Report resulted in an increase in the seven-day rolling average of added cases to 66.4 on Wednesday from 64.6 on Tuesday.

The University of Georgia, in Wednesday’s COVID-19 Health and Exposure Update, reported 19 local positive COVID-19 tests and 33 across the system. Those numbers had been 22 and 32 a week earlier.

The University also reported a positivity rate of 0.9, up from 0.8 the week before, from drop-in tests at Legion Field for persons without symptoms. The number of tests was 1,005, down from 1,143 a week earlier.

The Department of Community Health did not upload a Long-Term Care Facility Report on Wednesday and did not offer any explanation.

No county-level data are being reported.

Diane Baggett, communications manager for Oconee County, confirmed on Wednesday that the county will participate in a mass vaccine effort on Saturday, April 17, at the Civic Center, 2661 Hog Mountain Road, west of Butler’s Crossing.

The second dose will be administered on Saturday, May 8, also at the Civic Center, Baggett said.

Watkinsville Acting Mayor Brian Brodrick announced plans for the mass vaccination on his Facebook page last week. The City of Watkinsville is a partner in the event.

Jennifer Flowers, chief operating officer of The Landing, 2881 Monroe Highway (U.S. 78), contacted me via email on Wednesday afternoon to explain the entries for The Landing that appeared in the Tuesday Department of Community Health Long-Term Care Facility Report.

That Report was the first in which The Landing was listed, and it showed the personal care home with two COVID-19 deaths, seven resident cases of the disease, and 16 staff cases.

When I reported on the listing on Tuesday, I noted that the figures were cumulative, but I also indicated that I did not know why The Landing only appeared for the first time in The Long-Term Care Facility Report.

Flowers said that The Landing opened on May 12 of last year and that “newly licensed facilities in Georgia were unable to self-report” using the electronic system.

Flowers said she reported COVID-19 data via email to the Department of Communication Health “as cases presented among our residents or staff,” but these data did not appear in the Long-Term Care Facility Report until Tuesday.

“I am happy to report that we have 100 percent vaccine compliance among all residents who are either fully vaccinated or scheduled to get their vaccines/booster next week,” Flowers wrote. “We have 54 percent employee vaccine compliance, and we continue to educate and encourage our staff to obtain the vaccine.”

Flowers provided me the September and February dates for the two deaths that she said she reported to the Department of Community Health at the time they occurred but that appeared only in the Long-Term Care Facility Report on Tuesday.

The Daily Status Report added 76 confirmed COVID-19 deaths across the state on Wednesday, and the seven-day rolling average of added deaths increased slightly to 51.6 from to 51.4 on Tuesday.

Nineteen of the added deaths occurred in the last 14 days, and the seven-day rolling average of added deaths dated by day of the death increased just slightly from Tuesday.

Across the state, the Department of Public Health added 2,007 new cases of COVID-19 on Wednesday, and the seven-day rolling average of added cases increased to 1,576.6 from 1,485.7 on Tuesday.