The deaths were in seven of the 10 counties in the Northeast Health District, according to the Department of Public Health Daily Status Report. The exceptions were Oconee, Clarke, and Jackson counties.

The District now has 830 deaths attributed to the coronavirus, and the seven-day rolling average of added deaths increased from 2.1 on Tuesday to 2.4 on Wednesday. The District had added six deaths on Wednesday of last week.

Only the deaths in Morgan and Oglethorpe counties were of persons with a chronic condition.

INSERT: Watkinsville Mayor Bob Smith announced at the beginning of the Mayor and Council meeting on Wednesday night that he was resigning, saying “the city manager has taken over the responsibilities and duties that once belonged to the mayor.” Smith then left the meeting. Editor Michael Prochaska has posted Smith’s statement to The Oconee Enterprise Facebook page.

With the addition of the 123 new cases, the seven-day rolling average of added cases increased in the Northeast Health District to 83.6 from 80.7 on Tuesday. The District had added 103 cases last Wednesday 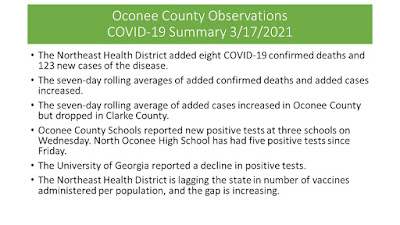 The seven-day rolling average of added cases had dropped for nine days in a row prior to Wednesday.

On Wednesday evening, principals at Malcom Bridge Elementary School, Malcom Bridge Middle School, and North Oconee High School sent parents of students in those schools email messages saying they had learned on Wednesday that “an individual” in each school had tested positive for COVID-19.

That brings to eight the number of such announcements parents have forwarded to me since the issuance by Oconee County Schools of its Weekly Status Report on Friday and the fifth positive test at North Oconee High School and the second at Malcom Bridge Middle School since Friday.

The University of Georgia, in its Wednesday COVID-19 Health and Exposure Update, reported only 23 local positive COVID-19 tests during the March 8 to March 14 week, down from 27 a week earlier, and 33 positive tests across the system, down from 47 last week.

The positivity rate for walk-in tests at Legion Field remained at 0.8, based on administration of 1,565 tests, down from 1,777 a week earlier.

The Department of Community Health did not add any new COVID-19 cases or deaths in the Northeast Health District in its Wednesday Long-Term Care Facility Report.

The Department of Public Health did not update its vaccine web dashboard on Tuesday, and the data released on Wednesday indicate that the Northeast Health District added 3,964 new vaccinations since Monday.

The ratio of number of vaccinations administered per person in the District is 0.189. That compares with a ratio of .263 in the state.

Not only is the Northeast Heath District lagging the state in vaccinations, but the gap is increasing.

The difference between the state and Northeast Health Distract ratio was .073 on Wednesday, compared with .071 on Monday.

The Daily Status Report added 70 confirmed COVID-19 deaths across the state on Wednesday, and the seven-day rolling average of added deaths increased to 44.1 from 42.7 on Tuesday.

Thirty-two of the added death occurred in the last 14 days, and the seven-day rolling average of added deaths listed by day of occurrence increased on Wednesday.

The Department of Public Health eliminated one death previously attributed to COVID-19.

The Department of Public Health added three “probable” deaths from COVID-19 in Wednesday’s Daily Status Report, and the seven-day rolling average of added “probable” deaths increased to 4.6 from 4.0 on Tuesday.

Across the state, the Department of Public Health added 2,164 new cases of COVID-19 on Wednesday, and the seven-day rolling average of added cases increased to 1,565.0 from 1,524.9 on Tuesday.

The Department of Public Health reported on Wednesday administration of 105,572 additional doses of the COVID-19 vaccines across the state since Monday.

The Department of Public Health did not report any new allocation of doses of the vaccine to the state but did report shipment of an additional 184,230 doses. As of Wednesday, 96.2 percent of the allocated doses had been shipped, and 77.3 percent of the doses shipped to the state had been administered. The state is now shipping to 1,301 providers across the state, up from 1,256 on Monday. Charts The charts below show the seven-day rolling average of the addition of COVID-19 molecular and antigen cases combined for the Northeast Health District and for the state of Georgia since Nov. 3, when the state first began reporting antigen test results. The data in the charts come from the Department of Public Health Daily Status Report and have been updated for the 2:50 p.m. Report on Wednesday.
Posted by Lee Becker at 9:35 PM