***Both Of COVID Deaths In Oconee County***

The Northeast Health District added 64 COVID-19 cases and two confirmed deaths from the disease with the release of Saturday’s Department of Public Health Daily Status Report. Both of the deaths were in Oconee County.

The deaths occurred on Feb. 1 and March 12. It isn’t possible to date the specific death given the public information available. No Oconee County long-term care facility deaths were reported on those days.

The confirmed COVID-19 deaths bring to 64 the number in Oconee County since the onset of the pandemic in February of last year.

Across the 10-county Northeast Health District, the number of confirmed COVID-19 deaths is now 911.

With the addition of the two deaths on Saturday, the seven-day rolling average of added deaths fell to 1.0 from 1.1 on Friday.

With the addition of the 64 new cases of COVID-19 in Saturday’s Daily Status Report, the seven-day rolling average of added cases fell to 58.6 from 59.0 on Friday.

Oconee County added nine cases, and the seven-day rolling average of added cases increased to 3.9 from 3.7 on Friday.

Clarke County added five cases, and the seven-day rolling average of added cases in Clarke County fell to 9.7 on Saturday from 12.7 on Friday.

Philip Brown, principal at North Oconee High School, sent parents of students in the school an email at 6:08 p.m. on Friday informing them that “an individual” in the school had tested positive for COVID 19.

Oconee County Schools, in a report released earlier on Friday, reported three Active COVID-19 Cases at the system’s 11 schools. The weekly report did not indicate where those cases were located.

Anisa Sullivan Jimenez, director of Communications for the schools, has said in the past that the central office talks with school principals before filing the report on Friday, so it seems likely the North Oconee “individual” was one of the Active Cases included in the Friday report.

The Department of Community Health does not issue a Long-Term Care Facility Report on the weekends and did not issue one on Friday.

The Department of Public Health released data on Saturday showing that 17.8 percent of the population of the Northeast Health District is now fully vaccinated.

The figure had been 17.6 percent on Friday.

The District is not keeping up with the state, which has 22.0 percent of the population vaccinated, meaning that the District is behind the state in vaccinations by 4.2 percentage points.

On Friday, the District had been behind the state by 3.9 percentage points.

In Oconee County, 27.1 percent of the population is fully vaccinated, while in Clarke County that figure is 19.6 percent.

These percentages are based on the population figures given by the Department of Public Health in the Daily Status Report.

The State Vaccine Distribution Dashboard reports higher percentages for the 10 counties in the Northeast Health District (it does not report the data for the District itself) by using lower estimates of the population sizes.

With this post, I am suspending my daily reporting on COVID-19 in Oconee County and the counties surrounding it.

I had never intended to post daily, and I have been hoping that I would find a point where there was nothing new to report.

That has not happened, and it does not appear it will happen in the near future.

At this point, I want to step back from the daily post, determine what I can do that remains helpful, and attempt to find a more efficient and less time consuming way to distribute the information available.

It remains the case that no other source is analyzing, interpreting and presenting the state data with a focus on Oconee County.

I will be most interested in any suggestions you can offer as I consider what I can do in the future.

Across the state, the Department of Public Health added 1,626 new cases of COVID-19 on Saturday, and the seven-day rolling average of added cases decreased to 1,476.9 on Saturday from 1,502.6 on Friday. 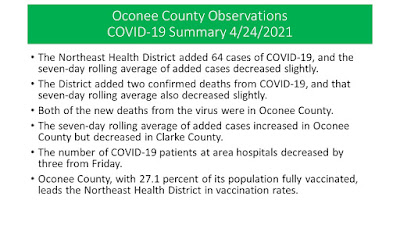 The Daily Status Report added 47 confirmed COVID-19 deaths across the state on Saturday, and the seven-day rolling average of added deaths increased to 25.6 from 23.7 on Friday.

Eleven of the added 47 deaths occurred in the last 14 days, and the seven-day rolling average of added deaths dated by day of occurrence increased on Saturday from Friday.

The Department of Public Health on Saturday reported data indicating that 22.0 percent of the state’s population is fully vaccinated, though the Vaccine Distribution Dashboard lists the percent fully vaccinated at a rounded 23 percent.

Across the state, 5,771,288 doses of the vaccine have been administered, representing 86.4 percent of the doses shipped to the state.

Johnson and Johnson has shipped 311,300 doses, but the Department of Public Health has not reported how many of those doses were administered before the hold was placed on the vaccine.

The Centers for Disease Control and Prevention lists the percentage in Georgia that is fully vaccinated as 21.9.

Georgia has moved ahead of Alabama, which, at 21.5 percent, is the state with the lowest percentage of its population fully vaccinated.

I completely understand but we will all miss your reports. Thank you for your diligent work during this ongoing crisis.

This has been an extraordinary service and saved me much time. Initially I looked at many sites then realized that yours were the most reliable and consistent reports. You analyzed so much data and presented it with clarity. Thank you for your clear and careful reporting all these many days.

Your daily reports will be missed! It has been comforting to know how we have been doing locally, but I realize that entailed a lot of work by you. I appreciate all you have done to keep us informed through these uncertain times. Thank you.

Thank you so much for your hard work.

As with influenza, there will likely be always be something to report about Covid, even with the vaccines. My suggestion is to consider reporting quarterly or monthly. Thank you!

Thank you so much, Lee. I have appreciated having this resource since you started doing it. I also follow the state Dept of Public Health web site, but you do so much more, especially with the local data. I will miss it, but completely understand why you would want to step back.