From the beginning of classes and through just before noon on Thursday, Oconee County Schools has recorded 40 cases of COVID-19, all but three of them among students.

Seventeen of the 37 COVID-19 positive students were in kindergarden through fifth grade, 13 were in the system’s two middle schools, and seven were at the two high schools.

Two of the staff cases were at North Oconee High School, and the third was at Oconee County High School.

The counts are for a six-and-a-half day period of actual classes but for eight and a half days total. In the seven days ending on Aug. 11, Oconee County schools recorded 34 active cases.

Oconee County Schools last year reported counts on Fridays for the seven days leading up to Friday and reported its most active cases–40--on Jan. 15. The weekly count exceeded 28 active cases only that one time.

All but two of the 40 cases reported since the beginning of the school year remain active as of noon on Thursday.

These data on COVID-19 cases come not from Oconee County Schools directly, which is refusing to release any data on the disease to the public this year, but indirectly from parents who obtained the data via an open records request of the schools.

Anisa Sullivan Jimenez, director of Communications for Oconee County Schools, confirmed that the system is reporting all its cases to the Georgia Department of Public Health but keeping “a record of cases as well.”

Crowe, who is a nurse, requested records that listed the number of COVID-19 cases, the dates of the positive tests, and the number of isolations and quarantines.

Crowe was working in collaboration with John Phillips, a rural sociologist who had obtained detailed COVID-19 records from Oconee County Schools last year, so she knew the format the Schools used in reporting its cases to the Department of Public Health.

Phillips has children in Oconee County Schools as well.

Whitmire released a spreadsheet containing the requested information to Crowe on Thursday afternoon.

Phillips sent me a copy of the materials Crowe received from Whitmire on Thursday evening, and Phillips published a summary of the information on Facebook in a group of Safety First Reopening Schools.

I used the data Phillips received last year and had discussed with him on Aug. 9 the open records request that had been submitted to Oconee County Schools this year. He agreed to release the data to me once there were received.

Whitmire’s spreadsheet lists the first positive case at 9:54 a.m. on Aug. 5, the second day of classes. That case was at Oconee County High School.

The largest number of positive tests recorded was on Monday, Aug. 9, with 12, followed by Wednesday, Aug. 11, with 10.

On the half day of Aug. 12, four cases were recorded.

The spreadsheet Whitmire released listed only six students and no staff quarantined during the six-and-a-half days of classes covered.

Two of the cases involving students on the spreadsheet were struck through, and their “Return Date” was shown as Aug. 11 and Aug. 12.

Last year, this technique was used as a way of distinguishing between Active and Inactive cases, and that seems to be what is being done again this year.

All of the remaining 38 cases have a return date later than Aug. 12.

The cases are spread around the system, with each of the 11 schools recording at last one case.

Oconee County Schools opened on Aug. 4 without a mask or vaccine mandate.

While last year, school principals informed parents each time a positive test result was reported in a school, this year parents are informed only if someone in one of their student’s classes tests positive.

Jimenez has said no information will be released to the public.

At 5:25 p.m. I received an email message from Jimenez.

"We released a weekly status report at 4 p.m. It’s on the website. Starting Monday, parents will also be notified at both the classroom and school levels when there is a positive case."

I had written to Jimenez at 8:39 a.m. today (Friday) saying "I’m asking you to reconsider and provide the weekly updates as you did last year."

She did not respond.

Superintendent Jason Branch sent parents an email at 4:05 p.m. on Friday. A parent sent me a copy at 6:05 p.m.

"Starting today, Weekly Status Reports will be posted on the OCS website at 4 p.m. each Friday afternoon," the email from Branch said. "In addition, beginning Monday, parents will receive a school-level notification when a COVID case is reported at their child’s school. Classroom-level notifications will continue."

A screenshot of that report, listing 48 Active Cases, is below. 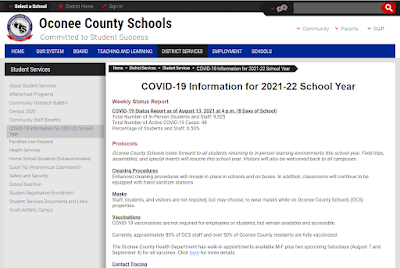 Thank you so much for doing this, Lee, and thanks to the parent for the open records request. The school administration should not really have to be encouraged to release this information. I don't understand why they are so resistant to being transparent. This is a serious public health issue, which they don't seem to grasp.

We can't wait for your update late next week. Oh my gracious. It looks like the school board thinks we in Oconee County are stronger than strong,, possess the greatest of character, have nothing in common with those folks in Clarke County or anywhere else for that matter. We need not worry.

Despite this superiority, of course, the virus don't care who we are, how wealthy we are, how strong we are, for whom we vote, or any other thing we can think of. Its job of work is to spread and without our resistance, will spread anywhere and as fast as it can full stop. No masks, no resistance, no regard for its intention or power...oh my.

So once again, what is it they are afraid to tell us day-by-day? Perhaps among themselves they are very worried but don't know what to do now they've made a stand. And who pays for this mistake? I guess we all do. Sadly folks will get sick, some very sick, and some will die needlessly.