***Rankings Did Not Change As Dramatically***

Students in Oconee County Schools scored lower on 17 of the 25 Georgia Milestones Assessment System measures released last month than they did in July of 2019 when the state last released results from the standardized tests.

Across the state, test scores were lower in 2021 than they were in 2019, likely reflecting differences in the education experiences of students in the last academic year due to the COVID-19 pandemic as well as differences in testing procedures.

Even with the drop in scores, Oconee County Schools saw a decline in its rank among other school systems in the state in only five of the 25 possible comparisons and saw increases in 11 comparisons.

The gains were not enough, however, to forestall a drop from 1 to 3 in the ranking of Oconee County Schools by SchoolDigger.com or move it up from its number 2 ranking by Niche.com. Both use the Milestone data in their rankings.

Oconee County Schools has heavily promoted its ranking by SchoolDigger.com since it was announced following the release of the state testing data in 2019.

Oconee County Schools is still the “#1 School System in Georgia” on that fact sheet, which on Sunday was on the school system’s web page.

In releasing the Milestones data on Aug. 16, the Georgia Department of Education states that “In general, year-to-year comparisons should not be made using school- and district-level data,” which are the data released.

Yet in the second paragraph of the release, the Department notes that “the scores show slight decreases compared to 2018-2019.”

“Georgia Milestones was designed to measure the performance of students in a typical educational environment,” the statement reads, “and in 2020-2021, rolling quarantines, rising case counts, and shifting instructional models impacted the educational experience for students throughout the state.”

Of course, a comparison of the 2021 data with the 2019 data is one way to measure the impact of those educational experiences on learning.

State School Superintendent Richard Woods also is quoted on the state web site as saying “With educators already working to get students back on track and the vast majority of school districts offering five days a week of in-person instruction this year, I'm confident students will receive the support they need to make up any lost ground."

More problematic for the comparisons than the change in learning environment is the administration of the 2021 tests.

The Department advised school districts that they should not require virtual students to come into a school building solely for the purpose of taking Georgia Milestones if they were uncomfortable doing so due to the pandemic.

The release of the 2021 data included a note on the percentage of students who took each of the tests.

In Oconee County, those figures generally were quite high, ranging from 82.9 percent to 97.6 percent, with all but three of the tests taken by more than 90 percent of the eligible students.

It is impossible know, however, how those missing students would have altered the scores on the tests had they participated.

Regardless, the released data are the District’s scores, though with an asterisk behind them because of the missing test takers.

Jimenez sent out a news release about the Milestones data on Aug. 16, stating that “On each of the 19 assessments for the 2020-21 school year, Oconee County Schools had an average well above that of the state of Georgia. OCS ranked in the top 10 in the state on all assessments as well.”

She listed the ranking for 18 measures, leaving out the Grade 5 Science ranking as well as the six rankings for Reading Level.

I asked Jimenez for additional analyses of these data, but she told me I had to file an open records request to get them.

It turns out, Oconee County Schools ranked fourth on Science scores at Grade 5.

At the meeting on Board of Education on Monday, Claire Buck, chief academic officer, released a more detailed report on the Milestones scores.

The charts presented by Buck show Oconee County Schools scoring well above both systems across the state and a sum of the systems in the Northeast Georgia Regional Educational Service Agency (RESA) grouping on all of 19 comparisons.

The final four comparisons are for end-of-class scores on American Literature, Algebra I, Biology, and U.S. History, all at the high school level.

Buck showed the ranking of Oconee County Schools with the other school districts in the state and with the sum of the scores in the RESA Northeast Georgia grouping in the presentation on Monday.

On each of the 19 comparisons shown, Oconee County Schools ranked in the top 10, ranking Number 1 for Grade 8 Social Studies and Number 1 for the U.S. History end of class score.

It’s lowest score was Number 7 for end of class grades in American Literature.

Buck began her Teaching and Learning Report by echoing the state Department of Education, saying “I want to point out that it is important that these results are interpreted around the state in the context of the COVID-19 pandemic and associated learning disruptions.

“I encourage everyone to use caution in making year-to-year comparisons with these results,” she continued.

Buck then said that Oconee County Schools was “the Number 1 county school system on 12 of the 19 assessments." She didn’t say this, but the emphasis is on “county.”

Georgia has 159 counties but 180 school districts.

When Buck finished, Board Member Tim Burgess said “I think you made a valid point about the difficulties and the issues last year and the need to look at these scores in that light.”

“I think when I look at those scores, given all the difficulties and the uniqueness of the year we went through last year, for me it's a validation of the work and the effort and the commitment that you and all of your staff and all of these principals and all the teachers in all the school buildings put into the effort to carry out as successful normal school year as we could possibly have had last year,” Burgess said.

“So everybody in this county owes all of you a daily gratitude for being able to pull that off to that level,” he ended.

“We did actually see some increases across the assessments,” Buck said. “So very pleased to report that.”

Buck did not elaborate on any of those comparisons from 2019 to 2021, and no one on the Board asked her to do so.

No Milestones data were gathered in 2020.

I downloaded the data from the Milestones web site and analyzed them, as I had done in 2019.

I included the six measures of Reading Status Scores that Buck did not use in her analysis either in 2019 or this year.

I also used the same standard Buck had used, examining the percentage of students classified as “Proficient Learners And Above. For the Reading Status measures, I used percent “Grade Level And Above.”

None of those comparisons were shown to the Board, but Buck’s comments indicate that she has done these analyses as well.

The comparisons I conducted are shown in the four tables below. 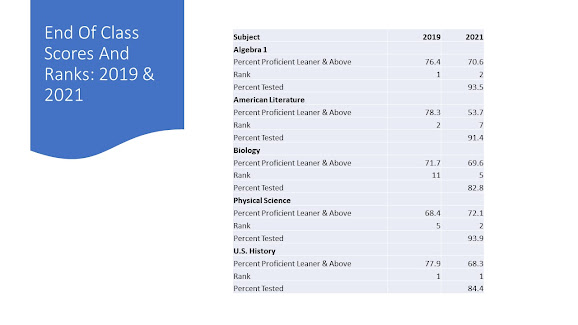 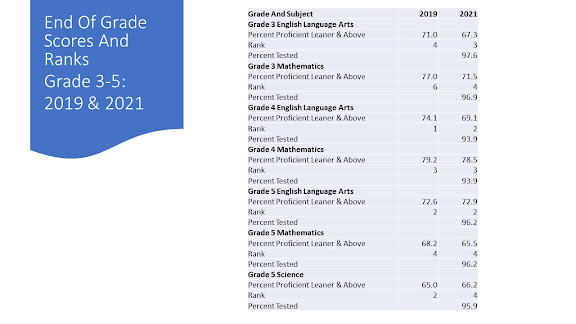 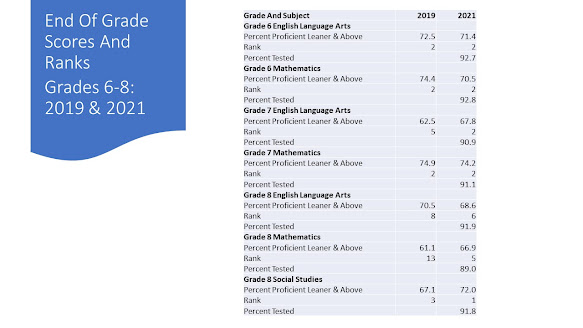 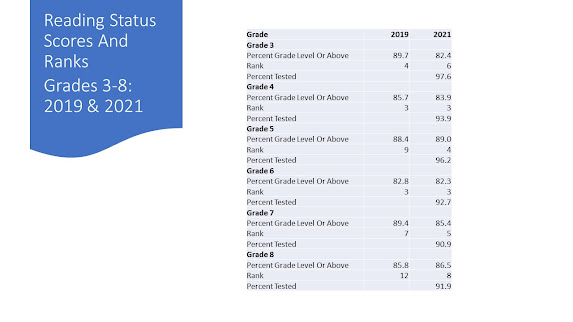 The charts show that Oconee County scores dropped in 17 of 25 comparisons.

Some of those declines were quite small, but others were more striking.

All four of the comparisons at the high school level showed declines, with the drop in the American Literature Score of 24.6 points quite dramatic.

The only growth in the end of class scores was for Grade 8 Physical Science.

The rankings changed much less than the scores, indicating that other schools were experiencing similar declines in scores.

As Buck said, there were some significant increases as well.

At the end of the meeting on Monday, Jimenez told the Board that the “two sided sheet has now been completed with our annual enrollment data as well."

She said that the “Quick Facts and annual reports have been made available to realtors, to the Chamber (of Commerce), and to the Welcome Center. It's also on our website.”

She made no mention of the erroneous claim regarding the SchoolDigger.com ranking.

SchoolDigger.com and Niche.com weight and interprets the data from the state and other sources in computing their ratings score and making their rankings. The weighting procedures are not released.

The SchoolDiger.com site indicates its results were updated with the release of the state's Milestones data on Aug. 16.

For 2011, SchoolDigger.com rates Jefferson City Schools and Bremen City Schools as the Number 1 and 2 school districts in the state respectively. Oconee County is Number 3.

The Georgia Department of Education does not rank school systems.

Oconee County Schools makes a video recording of its meetings, but it is no longer allowing others to embed its video on another site.

The video is available on the OCS YouTube site.

Buck began her teaching and learning report at 5:34 in the video.

Jimenez began her communication report at 30:59.

Thank you Lee Becker for keeping us informed with your solid analysis and interpretation.