In the first five days of early voting, 177 Oconee County voters have cast a ballot for the Nov. 2 election that has a Transportation Special Purpose Local Option Sales Tax up for approval.

In the first five days of early voting for the Education Local Option Sales Tax in March, 244 persons had cast a ballot.

The 177 votes cast last week represents less than a percent of the 32,066 eligible to cast a ballot.

The 244 votes case in February represented a slightly larger percentage of the 31,965 eligible voters in that election.

Fifty-two of the 177 ballots cast so far were by voters in Watkinsville, and six were by voters in North High Shoals. The majority of the voters casting ballots in those city races likely also voted on the tax referendum.

In Bogart, 11 voters have cast their ballot in early voting for the city races, but that contest is on a ballot that does not include the tax referendum, and voters in Bogart have to vote separately on the tax referendum.

NOTE: This post has been updated to correct an error in the data on early voting in the March election. I apologize for the error.

The Georgia General Assembly earlier this year altered both early voting and the procedures for use of absentee ballots. 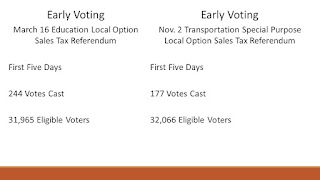 The first five days of early voting for the March 16 election–Feb. 22 to Feb. 26–were prior to the passage of that election law revision and did not include a Saturday.

Early voting last week did not include Monday, a holiday, but it did include Saturday, one of two mandated by the new law.

The new law shortened the time allowed for applying for an absentee ballot, set additional identification requirements, and eliminated the external drop box for submitting those ballots.

By Feb. 26, Oconee County’s Office of Elections and Registration and Elections had mailed 30 absentee ballots and received three back.

By the end of the day on Saturday, that Office had issued 55 absentee ballots and received three.

By the end of early voting on March 12, the total number of persons participating in early voting was 1,254, and another 28 had returned an absentee ballot, for 4.0 percent of the total eligible voters.

Watkinsville held a special election in June after then Mayor Bob Smith stepped down.

The ballot included two names for Mayor, Brian Brodrick and Peter Steckel, though Steckel had officially withdrawn from the race.

After five days of early voting in that June special election, 143 persons had cast a ballot, or nearly three times the 52 cast so far for the Nov. 2 race.

Brodrick and Rebecca Billings are on the Nov. 2 ballot seeking to be Mayor of Watkinsville.

Maultsby and Connie Massey, the incumbent, are seeking election to Post 2 on Council.

Garrett’s name will be on the ballot unopposed for election to Post 1.

In Bogart, Jenny Bridges, David Kilpatrick, and Greg Maddox are running for two seats on Council, currently held by Bridges and Kilpatrick.

All seats on Council are at large, and the top two vote getters will assume the two seats.

Bogart includes parts of Oconee and Clarke counties, and 838 of the city’s 953 registered voters are in Oconee County.

Bogart conducts it own elections, and voters are using a paper ballot, which does not include the Oconee County Transportation Special Purpose Local Option Sales Tax referendum.

In North High Shoals, Megan Cundiff and Jared Strickland are contesting the open Post 5 on Council. Running unopposed are Eric Wright for Post 3 and Hilda Kurtz for Post 4.

The Oconee County Office of Elections and Registration is handling the county-wise tax referendum election as well as the elections in North High Shoals and Watkinsville.

Watkinsville has 2,238 eligible voters, and North High Shoals has 484.

Early voting continues from 8 a.m. to 5 p.m. Monday through Friday until Oct. 29 at the Civic Center, 2661 Hog Mountain Road, west of Butler’s Crossing.

Voters can submit an absentee ballot application by filling out a form, available online, and sending or delivering it to the Office of Elections and Registration, 10 Court Street, opposite the Courthouse in Watkinsville.

Early voting in Bogart is from 8 a.m. to 4 p.m. on weekdays and 9 a.m. to 5 p.m. on Oct. 23 at the Historic Agricultural Center, 125 East Thompson Street, for Oconee County and Clarke County residents who live inside the city.

Bogart voters can obtain an absentee ballot for the city race by contacting City Hall by phone, email, in person, according to Jenny Jordan, election supervisor for the city.

The Transportation Special Purpose Local Option Sales Tax would increase the county sales tax from 7 to 8 percent, with the new revenue to be used for transportation projects.

The tax, if approved, will run for five years or until $56 million is raised.

The ballot language does not list specific projects to be funded by the tax, but county officials have said the money if approved will be used to reduce property taxes by 1 mill.

This will be possible because transportation projects currently being funded by property tax will be funded by the new sales tax.

Other uses of the sales tax will be for intersection improvements, multi-use paths, and roadway paving.

Clarke County already has a Transportation Special Purpose Local Option Sales Tax in place, and its total tax is 8 percent. The sales tax in Barrow County is 7 percent.

The city races on the ballots in Bogart, North High Shoals, and Watkinsville are nonpartisan.

The Oconee County Democratic Party extended invitations to all of the candidates whose names will be on the ballot on Nov. 2 to join in a virtual Meet and Greet at 6:30 p.m. on Oct. 21.

The party also invited the mayors and members of councils in the four cities who are not up for re-election.

Each speaker will be given the opportunity to talk for five minutes.

Billings and Brodrick, Watkinsville mayoral candidates, have agreed to speak, as have Cundiff and Strickland, Post 5 candidates in North High Shoals.

Lucas and Kurtz in Bogart also will be on the program.

Seven others also have agreed to join the program, including Garrett in Watkinsville and Wright in North High Shoals, who are running unopposed.