Oconee County’s legislators in the Georgia General Assembly will find themselves with rather different districts when the legislation they and fellow Republicans passed on Monday and Wednesday takes effect for the November 2022 elections.

Marcus Wiedower, who represents the county from the 119th House District, will gain a new Oconee County precinct while losing two precincts in Clarke County if he seeks re-election.

Bill Cowsert will continue to have all of Oconee County in his Senate District 46, but he will have fewer precincts in Clarke and Walton counties and add precincts in Gwinnett and Barrow counties, provided he decides to run again for his seat.

For voters in Oconee County, the only real change is that those who live in the East Oconee Precinct will have a new legislator under any circumstance.

For voters in Clarke County, the redistricting will result in much greater change, with voters in two precincts on the east side being lumped with a geographically large new district that stretches from Clarke County to Putnam County.

The partisan consequence of the changes can only be estimated, but an analysis focused on past voting in state legislative races suggests that Wiedower and Gaines will have safer districts if they run in 2022, while Cowsert’s fortunes will be largely unchanged.

The General Assembly was required to adjust the boundaries of the legislative districts because of growth in the population of the state from the 2010 Census to the 2020 Census, released for the special session of the legislature that opened on Nov. 3.

The General Assembly is required to create legislative districts of roughly equal size.

In principle, it also is supposed to focus on communities of interest, that is, create districts that reflect common aspirations and needs.

In terms of raw numbers, however, Oconee County’s increase of 8,991 put the county at the 27th position in the state.

The Georgia House has 180 members, so the ideal size of a district is 59,511, meaning Oconee County is too small to have its own House District, while Clarke County has more than enough citizens for two House members on its own.

Neither Oconee nor Clarke has enough residents for a Senate district, though their combined population of 170,470 would be only 20,814 citizens short.

Neighboring Madison County has 30,671, pushing any Senate District that combined them about 9,893 over the ideal size, meaning one of those three counties would have to be put into another, adjoining districts.

District parts have to be contiguous.

But these simple strategies for creating districts run up against obstacles.

Clarke County is heavily Democratic, and two of its three representatives are Republican because of the way the current districts were created in 2011.

So the districts are not created from scratch, but rather from what already exists, with incumbents making the decisions.

What happened to Clarke County in the map approved by the House on Wednesday illustrates how something other than community interest dictates the outcome.

Clarke went into the session with one House District entirely in the county, represented by Democrat Spencer Frye, and two partial districts, represented by Republicans Gaines and Wiedower.

Clarke came out of the session with its citizens divided into four districts.

Frye’s district got shifted around, but it is still entirely in Clarke County.

Both Gaines and Wiedower gave up parts of Clarke, making the Clarke County less significant parts of their districts.

And two Clarke precincts and parts of a third–around Winterville–were moved to a new District, where they will have little impact on the election outcome.

The Democrat plan would have put Oconee into a district with Clarke, another with Walton and Morgan counties, and a third sliver with Clarke, Oglethorpe, Greene and Taliaferro counties.

Both parties released their maps with detailed files that require expertise with GIS software. GIS stands for Geographic Information System

I don’t have that expertise, so I asked Philip Ashford for help.

Ashford, who lives in Oconee County, studied in the Center for Geospatial Research at the University of Georgia and currently is an instructor for a course called GIS for Urban Engineering, Planning, and Development at the university.

The course is in the School of Environmental, Civil, Agricultural And Mechanical Engineering in the College of Engineering.

Ashford also is a Commercial Sales Person at Nichols Land and Investment, based in Oconee County.

Ashford created the maps based on the 2020 data used in this post, which are essential to understanding the characteristics of the districts approved by the legislature.

The new House District 120 will have all of one precinct in Jackson County and parts of another, parts of a single precinct in Barrow County, and Marswood Hall and Bogart in Oconee County.

The new 120th also will have six precincts in Clarke County and parts of a seventh.

The district geographically will shift north, with Jackson County a more prominent part.

Prior to redistricting in 2011, the three Oconee County precincts now in the 117th had been part of a district in Clarke County that had elected Democrat-turned- Republican Doug McKillip.

The legislature in 2011 created the 117th to protect McKillip as a Republican, but McKillip subsequently lost in a primary to Regina Quick.

The 121st will pick up East Oconee in Oconee County from the 117th. It also will have four whole and three partial precincts in Clarke County.

The new District 121 also has the remaining 10 precincts from Oconee County.

The existing 118th District becomes the 122 District on the new map.

The 118th consists of 10 precincts in Clarke County.

The new 122 will consist of 10 precincts from Clarke County and a partial precinct.

Only eight of those Clarke precincts are currently in the 118th.

The New District 124 gets two Clarke County precincts and parts of a third.

These are added to a district made up of all of Oglethorpe, Greene and Taliaferro counties and all or parts of three precincts in Putnam County.

The new 123 House District does not include any precincts in Clarke County. 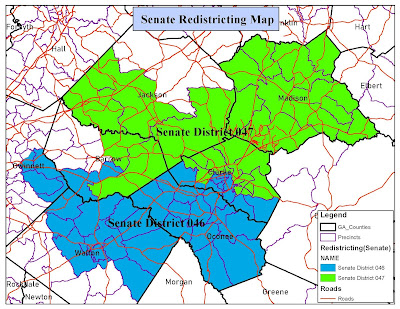 The New Senate District 46 will include eight precincts in Clarke County plus another two partial precincts.

The New 46th will have 12 precincts in Walton County, one precinct in Barrow County, and three full and one partial precinct in Gwinnett County.

Georgia does not have registration by party, so the only data that can be used to assess partisanship of the districts is past election outcome, including choice of a ballot in the primaries.

I focused my analysis on voting in the districts in 2020 in the legislative races. I downloaded data from the Secretary of State web site for all counties included in the maps above.

For partial precincts, I used the vote of the whole district if the district had not been split in the past.

Frye ran unopposed in 2020, so I used the Senate races for the precincts in the 118th he represented.

In the computation for the newly formed 124th House District, I used the vote in the 10th Congressional District, since most of the House races were without opposition in 2020.

In computation for the new Senate districts, I used Senate vote in 2020.

This analysis indicates that the New House District 120 is about 6 percentage points more Republican than the current 117th.

The New 122 House District is largely unchanged from the existing 118th and is heavily Democratic.

The New Senate District 47, which now incorporates much more of Clarke County, is 8 percentage points less Republican, though still likely to produce a Republican outcome.

Sen. Cowsert from the 46th District, who serves as vice chair of the Senate Redistricting Committee, said in making the motion for passage of the Republican map on Nov. 5 that “I think it is a very fine map.”

Cowsert said it was not a “partisan” map.

The districts are equal “are as near as practicable in size” and thus the map “meets the requirements, I would say, of the “United States Constitution,” Cowsert said.

“We are in compliance with the Voting Rights Act,” Cowsert continued.

Cowsert did not note that the New District 46 splits Clarke, Walton, Barrow, and Gwinnett counties.

“There are only 29 splits, which is significantly less than the 38 or 39 in the current map,” he said.

“We heard repeatedly at hearings from voters in the Athens area that they desired their county to be made whole in one senate district, as it historically was,” Democrat Sen. Claire Butler had said earlier in the meeting.

“Our plan shows that it is actually very easy to keep Athens-Clarke County whole as the core of a district,” she said.

The Democratic map puts Clarke and Oconee counties together with a part of Walton County.

“It appears that partisan considerations, not geographic necessity, explains the majority's continued slicing and dicing of this part of the state,” Butler said.

In the Democratic map, she said, “all four counties that are part of the greater Athens community, Clarke, Oconee, Barrow, and Jackson, are kept whole among three districts.”

The vote in favor of the motion by Cowsert to send the Republican plan to the full Senate was 9 to 4, along party lines.

On the maps for Clarke County used above, there is uncertainty about the borders of Precincts 8C, 4A and 4B.

In both the House and Senate maps for Clarke County, there is a small area that is not attached to any precinct.

In the Clarke County Senate Map, this small area is in green between precincts 8c and 4 b and is orphaned.

According to the maps on the web site of Athens-Clarke County, this orphaned really is part of 4A, as is the finger of blue above it. The GIS map seems to reflect errors in the Clarke County maps.

This area of confusion also appears in the House map, but all of the area falls into House District 122.