Oconee County Schools plans to issue a request for proposals for construction of a New Instructional Support Center on North Main Street in Watkinsville on April 4 of next year, with construction to be completed in July of 2024.

The Instructional Support Center will be funded entirely by the Educational Local Option Sales Tax (ELOST) approved by voters in March of last year and will be the second most expensive project to be funded by that tax, behind the $34.2 million for the new Dove Creek Middle School.

The new building will be double the size of the current square footage of the Oconee County Schools central offices and will be made of up 57 percent occupied space, 21 percent space for growth, and 22 percent circulation space.

These details of county building plans were revealed in a report by Brock Toole, Chief Operations Officer for Oconee County Schools, to the Board of Education at its out-of-county retreat on Jan. 19.

Toole also told the Board that North Oconee High School already is operating over the 1,500 student capacity and Oconee County High School is projected to exceed that same capacity in 2029.

Ultimately both high schools are to add 26 new permanent classrooms to expand their capacity to 2,000 students.

The Oconee County Board of Education held its annual retreat at the Georgia Club in Barrow County on Jan. 19. The meeting had been announced late on the previous Friday and lasted more than six hours.

Minutes from the meeting, which take up less than a page, indicate only that the Board heard presentations from Superintendent Jason Branch and from six other school administrators.

The minutes do not contain any of the reports of Branch or the other school administrators. They also do not give any report of any discussion during the six hours of meeting.

Oconee County Schools did not livestream the meeting and has not provided any video of the meeting on its YouTube channel, where it places videos of its Work Sessions and Regular Meetings.

The Oconee Enterprise did not staff the meeting.

I was not able to attend for medical reasons, and the minutes do not report any citizens in attendance.

I obtained the reports of the administrators via an open records request.

The report I received of Toole’s presentation runs 26 pages and appears to be a copy of a PowerPoint presentation.

According to that report, Toole gave an overview to the Board of construction projects completed and those currently underway.

The two elementary school projects are to be completed for the coming school year, while the new middle school is to open for the 2023 school year.

The Board of Education in October applied for state construction funds for these three projects, though some of the funding for each will come from ELOST.

Toole listed the New Instructional Support Center among the projects in years 2024 to 2026.

The classroom addition at Malcom Bridge Elementary School is listed with a $6.2 million price tag, up from $3.2 million in the 2019 estimate.

The new estimate for the renovations at Rocky Branch elementary school are now $2.7 million, up from $1.5 million in the 2019 estimate.

Of the 10 projects listed in the 2022 to 2026 cycle, only the New Instructional Support Center will be funded entirely from ELOST.

Five of the projects will use Oconee County School General Funds, and seven either have or are anticipated to have state funding.

The new middle school, for example, will receive $5.4 million in state funding. The total cost for the school is the $39.6 million.

Toole reported that no ELOST money will be used for the eight-classroom addition at High Shoals Elementary School, though that had been listed as an ELOST funded project during the campaign for the tax.

Prior to the vote on ELOST VI in March of last year, Oconee County Schools would not release a time line for any of the projects other than the new middle school.

It also would not provide any cost estimates for the projects, though those clearly were available, and I subsequently obtained them through an open records request.

The lack of information didn’t seem to matter to voters, who voted overwhelmingly in favor of the referendum.

The New Instructional Support Center was listed as the ninth and final item on the list of construction projects in promotional materials for the referendum.

Until now, no details on the building have been available to the public.

A rendition of the Center in Toole’s report shows a two-story building with large columns on the front crowned by the “Oconee County Board Of Education” name tag. The building will be on 6.7 acres purchased by the Board in 2009.

In 2009, the Board purchased 6.67 acres on North Main Street just beyond that road’s intersection with Experiment Station Road for $900,000 from Charles and David Williams, but it has not used the property.

David Williams had been a member of the Board of Education prior to the purchase.

Administrative services are now spread around buildings at the end of School Street in Watkinsville.

Both of Oconee County’s High Schools have a capacity of 1,500 students. 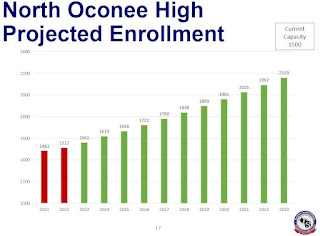 Toole told the Board that North Oconee High School currently has 1,512 students and is projected to see an increase to 2,159 students in 2033.

Oconee County High School has 1,246 students at present. Enrollment at that school is projected to increase to 1,756 in 2033.

Toole’s report includes a table with a target size of 2,000 at each of the schools, though it lists no date for reaching that target.

The table shows the addition of 26 classrooms at each of the schools.

According to Toole’s report, Oconee County issued 179 new residential building permits in 2021, the lowest number since 2012. 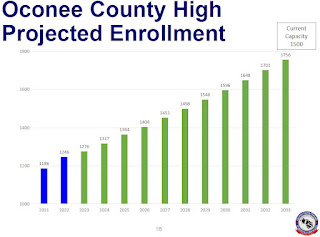 It will continue to add portable classrooms at both of those schools through Fiscal Year 2027, the last year for which Toole presented data.

Oconee County Schools will go from a total of three portable classrooms in the current fiscal year to 25 in Fiscal year 2027.

The minutes of the Jan. 19 retreat provide no indication what kinds of questions Board members posed to Toole or what kind of discussion followed his presentation.

Toole regularly gives an Operations report to the Board at its work session, and he is likely to do so at the work session at 6 p.m. Monday in the Superintendents Office at 34 School Street in Watkinsville.

The agenda for the meeting lists only Presentations and Discussions.

It is unlikely Toole will provide on Monday the kind of detail he provided in his report at the retreat on Jan. 19.

Board Members rarely ask more than fleeting questions of staff at either the Work Session or at Regular Meetings and almost never discuss among themselves the reports given.