***No Action On Okefenokee Protection Bill

Oconee County’s two representatives in the Georgia House voted with the Republican majority last week on three bills that, if passed and signed by the governor, will have impact on Oconee County Schools and on the University of North Georgia.

Republican Sen. Bill Cowsert, who represents Oconee County in the state Senate, voted with the Republican majority in favor of what is referred to as constitutional carry and to ban any state or local agency, government or school from requiring anyone to get a COVID-19 vaccination.

The three educational bills approved by the House now to go the Senate, and the Senate constitutional carry and vaccine ban bills now go to the House.

The Senate is considering its own legislation that deals with “divisive concepts” taught in schools and with parental access to teaching materials.

A House bill that would ban future mining on the eastern side of Okefenokee Swamp has not been acted on by the House Natural Resources and Environment Committee, on which Wiedower sits, and appears to be dead.

House Bill 1084 says that each local school system in the state may not “promote, or encourage divisive concepts” and must “adopt a complaint resolution policy to address complaints alleging violations” of the law by Aug. 1 of this year. 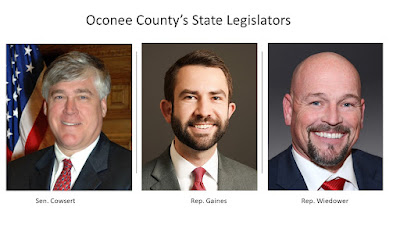 Divisive concepts are defined by a list, which includes “views espousing such concepts” as that “one race is inherently superior to another race,” that “The United States of America is fundamentally racist,” and that “An individual, by virtue of his or her race, is inherently or consciously racist.”

The bill passed 92 to 63 on Friday, with Wiedower and Gaines voting with the majority.

House Bill 1178, referred to as “Parents’ Bill of Rights,” states “that it is a fundamental right of parents to direct the upbringing and education of their minor children.”

The bill states that “No state or local government entity, governing body, or any officer, employee, or agent thereof may infringe on the fundamental right of a parent to direct the upbringing and education of his or her minor child without demonstrating that such action is reasonable and necessary to achieve a compelling state interest and that such action is narrowly tailored and is not otherwise served by less restrictive means.”

The Bill states that “If the local school superintendent or school principal denies a parent's request for information or does not provide existing responsive information within 30 days, the parent may appeal such denial or failure to respond to the governing body.”

The governing body, which is the Board of Education, “must place such appeal on the agenda for its next public meeting,” according to the law.

That bill passed on Friday 98 to 68, with Wiedower and Gaines in the majority.

House Bill 1 states that “public institutions of higher education shall not create 'free speech zones' or other designated areas of campus outside of which expressive activities are prohibited for the campus community.”

The Bill states that “Unrestricted outdoor areas of campuses of public institutions of higher education in this state shall be deemed public forums for the campus community.”

“Public institutions of higher education may maintain and enforce reasonable time, place, and manner restrictions for the campus community narrowly tailored in service of a significant institutional interest only when such restrictions employ clear, published, content- and viewpoint-neutral criteria, and provide for ample alternative means of expression,” the bill states.

The bill requires the Board of Regents to publish an annual report addressing “Any barriers to, or disruptions of, free expression within state public institutions of higher education” and provide a copy to each chamber of the General Assembly.

That bill passed 93 to 62 on Friday, with Wiedower and Gaines voting with the majority.

Senate Bill 319 states that “Evil resides in the heart of the individual, not in material objects” and “Since objects or instrumentalities in and of themselves are not dangerous or evil, in a free and just society, the civil government should not ban or restrict their possession or use.”

The bill strikes restrictions on use of firearms in current law, such as in parks, historic sites, and recreational areas

A “Lawful weapons carrier” is defined as “any person who is not prohibited by law from possessing a weapon” or has a license in another state for possession of a weapon.

Senate Bill 345 states that “No agency shall require proof of COVID-19 vaccination of any person as a condition of providing any service or access to any facility, issuing any license, permit, or other type of authorization, or performing any duty of such agency.”

The bill defines “agency” to include every level of government in the state.

The bill also states that governments cannot put in place any regulation that require “any person or private entity” to “require proof of COVID-19 vaccination.”

The bill passed the Senate on Friday 31 to 19 with Cowsert voting with the majority.

Darlene Taylor, a Republican from Thomasville, representing the 173 House District in the southwestern part of the state, along with 17 other sponsors, filed House Bill 1289 on Feb. 8.

The bill would prohibit the Georgia Environmental Protection Division of the Natural Resources Department “from issuing, modifying, or renewing any permit or accepting any bond to conduct surface mining operations on the geological feature known as Trail Ridge between the St. Marys and Satilla Rivers.”

The Bill was assigned to the House Natural Resources and Environmental Committee, on which Wiedower sits.

According to a report in The Current on Saturday, Committee Chair Lynn Smith has labeled the bill as “premature” and indicated her committee will not move on it.

I sent an email to Smith on Saturday asking her to confirm the report in The Current, an online news agency that serves the Georgia Coast. I have not heard back from Smith.

Twin Pines Minerals of Birmingham, Ala., has submitted applications to the Georgia Environmental Protection Division for five state permits it needs for its proposed titanium surface mine on Trail Ridge southeast of the Okefenokee National Wildlife Refuge.

The bill would not have affected the current applications.