***Independents Must Submit Signatures For Validation***

Two candidates for the Oconee County Board of Education qualified as Independents on Thursday and Friday, pending verification of nomination petitions.

The two candidates, Ryan Repetske for Post 2 and Melissa Eagling for Post 3, have until July 12 to file nominating petitions with 1,425 signatures of registered voters for each. The county has 31,894 registered voters as of the beginning of the month.

Incumbent Amy Parrish was the sole candidate to qualify as a Republican for Post 2, and three Republicans, Ryan Hammock, Julie Mauck, and Elliott Rogers, qualified for the open Post 3.

No Democrats qualified for any county office.

Republican incumbents Chuck Horton and Amrey Harden qualified for Post 2 and Post 3 on the Board of Commissioners respectively and have no opposition in the May 24 primary or the Nov. 8 General Election.

Oconee County Schools sent out the announcement that Parrish was running for re-election on Jan. 31, complete with her picture, a short biographical sketch, an endorsement from Board of Education Chair Kim Argo, and a statement about her desire to continue on the Board.

That announcement remains on the school system web site.

Parrish, who officially qualified on Wednesday, has served on the Board of Education since 2016 and has been vice chair since 2021. Parrish is a Senior Financial Advisor at Highland Trust Partners.

Repetske is an operations manager at Athens Neurological Associates and has graduate and undergraduate degrees in accounting from the University of Georgia.

Repetske, who qualified on Thursday, has three children at Colham Ferry Elementary School.

The Jan. 31 press release from Oconee County Schools also indicated that Post 3 Board Member Wayne Bagley would not seek re-election.

Mauck and Rogers qualified on Monday, Hammock on Tuesday, and Eagling on Friday.

Rogers is a real estate agent and has four children in Oconee County Schools. He has two degrees in education and has taught special education at the middle school and high school level.

Hammock has one child in Oconee County Schools and is a senior vice president of Pinnacle Bank. He also is a fourth generation farmer in Hall County.

Eagling is an attorney with three daughters at Colham Ferry Elementary School and a fourth child in a special education program at the University of Georgia.

Independent candidates are required to file a nomination petition with the signatures of five percent of the number of registered voters who voted in the most recent election for filling the office the candidate is seeking.

According to Jennifer Stone, assistant director of Elections and Registration for Oconee County, Repetske and Eagling will need to have 1,425 verified signatures of registered Oconee County voters on their nomination petition.

The pair were allowed to start circulating nomination petitions on Jan. 13 of this year.

“Upon successful verification of the required number of signatures,” Stone wrote on Thursday, the names will be placed on the ballot in November.

All candidates must fill out a form when they qualify for the local elections.

Here is the information from those forms for the six Board of Elections candidates. 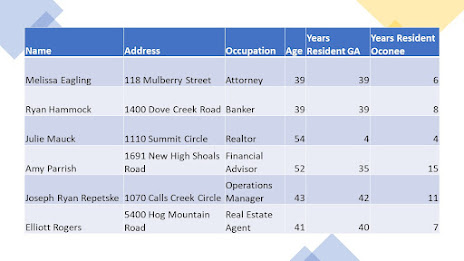 Board of Commissioners Qualifiers

Harden and Horton both qualified on Monday.

Horton won a special election to fill Post 2 in 2016 and was re-elected to that position in 2018. He had served two terms on the Board before stepping down in 2012.

Horton is a retired director of Public Safety/Chief of Police for the University of Georgia.

Harden was elected to Post 3 on the Board of Commissioners in 2020 to fill the unexpired term of William “Bubber” Wilkes, who passed away earlier that year.

Harden, a retired President and CEO of Oconee State Bank, is a founding member of the Oconee County Chamber of Commerce and served a term as its chair.

Johnson, who ran unsuccessfully against Gaines in 2020, is an educator, entrepreneur, and community leader in Athens.

According to Gaines’ biographical sketch on the General Assembly web site, he works at Cannon Financial Institute in Athens. He lives in Athens.

Wiedower qualified on Tuesday for the new House District 121, which includes all of Oconee County except Marswood Hall and Bogart precincts and parts of Clarke County.

Wiedower, according to his biographical sketch on the General Assembly web site, is a real estate agent with Coldwell Banker Upchurch Realty, development coordinator for Hillpointe LLC, and general contractor for Bulldawg Builders.

Auerbach, who qualified as a Democrat for House District 121 on Thursday, lists his occupation of head of data analytics on his qualifying form.

According to his LinkedIn listing, he is a research affiliate at the Center for International Trade and Security at the University of Georgia.

Cowsert has represented the 46th Senate District since 2006. The District includes all of Oconee County as well as parts of Clarke and Walton counties.

With redistricting, parts of Barrow and Gwinnett counties will be added to the District.

Cowsert, according to his biographical sketch on the General Assembly web site, is a founding partner of Cowsert and Heath law firm.

Ferguson lists his occupation as editor on his qualifying form.

In 2020, Ferguson ran unsuccessfully for the Democratic nomination for the 10th Congressional District. At the time, he said he was working as a screenwriter in Athens.

Oconee County remains entirely in the 10th Congressional District, which has been reconfigured through redistricting

The eight Republican candidates who qualified in the 10th Congressional District, with their listed city and occupation, are:

Jody Hice is stepping down as 10th District Representative to run for Secretary of State.

Johnson-Green ran against Hice in the last two elections as the Democratic Party nominee.

The Oconee County Republic Party is holding a forum for the four Republican candidates for the Board of Elections at its monthly meeting on March 28.

Other speakers include Bruce Thompson, candidate for the Republican Party nomination for Labor Commissioner, and Oconee County Director of Elections and Registration Rebecca Anglin.

The Party does not allow video recording of its meetings, so no video record of the comments of the four Board of Education candidates will be created.

Voters in Georgia can ask for a ballot for either party for the primaries, so Independents as well as persons who consider themselves Democrats are likely to be joining Republicans in selecting the party’s nominee for Post 3, since no local Democratic contests will be on the ballot.

Superior Court Judges Eric Norris and Lisa Lott both qualified in the nonpartisan elections for the Western Judicial Circuit, which includes Oconee and Clarke counties.

No one qualified to run against either of them.