The three Democrats seeking to unseat the three Republicans who represent Oconee County in the Georgia General Assembly began the election season with a small fraction of the financial resources of the three incumbents.

Andrew Ferguson, Mokah Jasmine Johnson, and Jeffrey Auerbach had only $35,927 in unspent campaign funds among them, according to the Campaign Contribution Disclosure Report each of them filed in early July.

By contrast, incumbents Sen. Bill Cowsert, Rep. Houston Gaines, and Rep. Marcus Wiedower had $654,664 among them.

The three incumbents had so much money, in fact, that in each case most of their spending in the first five months of the year was giving away money to other candidates in the state.

Oconee County Democrats have organized a gathering for Ferguson, Johnson, and Auerbach for 6:30 on Thursday night at the Oconee County Chamber of Commerce, 55 Nancy Drive in Watkinsville. The meeting also will be live streamed on Zoom.

In an unrelated political development, only the three incumbents for the Watkinsville City Council, Brett Thomas (Post 3), Christine Tucker (Post 4), and Jeff Campbell (Post 5), qualified by the end of qualifying on Wednesday.

Ferguson reported receiving $5,442 in campaign contributions from February to the end of June and spending $869. His cash on hand was $6,138. 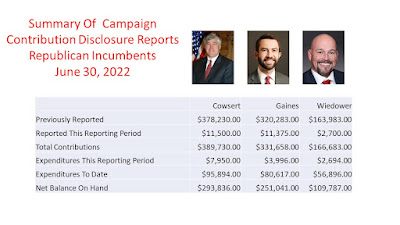 His largest contribution was $1,500 from Fair Fight Inc. PAC, and he also reported receiving $500 from Bertis Downs, an Athens attorney, $250 from State Rep. Spencer Frye (District 122), $250 from District Attorney Deborah Gonzalez, and $250 from Ryan Lockamy, an attorney in Durham, N.C.

His reported spending was for campaign “paraphernalia/misc,” and fundraising, office expenses, and information technology.

The legislature was in session during much of the period covered by the June 30 Campaign Contribution Disclosure Report, and Cowsert, Gaines, and Wiedower were prohibited from accepting campaign contributions during the session.

Cowsert reported receiving $3,000 from the Poarch Band of Creek Indians, Atmore, Ala., $2,500 from Savannah Distributing Co. of Savannah, $1,500 from Georgia Association of Realtors Political Action Committee, Atlanta, and $1,000 from Georgia EMC PAC, Tucker, from the Georgia Oilmen’s Association, Lawrenceville, and from SFAPAC, Inc, of Atlanta.

Cowsert’s largest spending was the $5,000 to Burt Jones For Georgia and $1,870 to the University of Georgia Foundation for football tickets.

The 46th Senate District includes all of Oconee County plus parts of Clarke, Jackson, Gwinnett and Barrow counties. 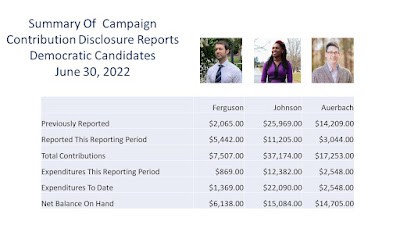 Gaines gave the $1,000 to Collins for Congress Athens, $500 to Fleming for State House, Covington, and that same amount to Conservative for McCollum, Gainesville.

Auerbach reported two contributions of $1,000, one from Larry Auerbach, retired, from Atlanta, and one from Janet Bernstein, Atlanta, retired. He also reported receiving $250 from Kent Alexander, Atlanta, author, and from Leigh Lathinghouse, Denver, Colo., a lawyer.

All of his spending was on “campaign paraphernalia/misc” and postage.

Wiedower reported receiving only $2,700 in campaign contributions from the first of February through the end of June and spending $2,694. His cash on hand on June 30 was the $109,787.

The 121 House District includes the remainder of Oconee County and parts of Clarke County.

Each of the candidates was required to file a Financial Disclosure Statement earlier in the year covering Calendar Year 2021.

Cowsert reported he is a partner in Cowsert Heath LLC, president of Wildcast Investments LLC, and director of Faithful Servant Charitable Foundation, all in Athens.

He lists investments in 82 businesses with a market value of more than $5,000 or for which he owns more than 5 percent of the total interests of the business, including Alibaba, Intel, Google, Aflac, Nike, and McDonalds.

He also reports he owns his home in Athens and 90 plus acres of undeveloped land on Lake Russell in Elbert County. He reports that his wife, who is not employed outside the home, has a property on St. Simon Island.

I cannot find a Financial Disclosure Statement for Ferguson. I wrote and asked him for one, but he did not respond.

On his campaign finance form, he reported he is editor of Ethos Risk Services and that he lives in Athens.

Gaines lists his personal residence in Athens an an asset. He does not have a spouse.

He reports he is a client advisor, Cannon Financial Institute, which does consulting and training for the financial services industry, in Athens, and is director, Carter Engineering Consultants, a Civil Engineering Consulting firm at 3651 Mars Hill Road, in Oconee County.

He lists investments in eight businesses, with a market value of more than $5,000 or for which he owns more than 5 percent of the total interests of the business, including Google, Amazon, and Microsoft.

Johnson lists her business as United Group of Athens Music Association LLC, in Athens, and ownership of a single family home in Athens with her spouse.

Johnson lists her occupation as director/Educator with AADM, Athens Anti-Discrimination Movement, a nonprofit.

Her husband also is employed by AADM and is self-employed as a marketing consultant and producer, she reports.

She reports she has no investments in a business with a market value of more than $5,000 or for which she ownership more than 5 percent of the total interests of the business.

Wiedower reports ownership of Bulldawg Buildings Inc. and of Georgia Rentals XVIII Inc., both out of his home at 1171 Cooperville Drive in Oconee County.

He lists ownership of two rental properties in Athens-Clarke County and one in Oconee plus his residence in Oconee County.

He reports he is a general contractor with Bulldawg and his wife is a nurse practitioner and owner of Georgia Rentals XVIII Inc.

On his biography for the General Assembly, Wiedower also lists that he is development coordinator for Hillpointe, LLC.

The web site for Hillpointe lists Wiedower as vice president of External Affairs for Hillpointe, which is a builder of large residential complexes.

Auerbach reports he owns a home in Athens and is employed as Adjunct Professor at Emory and is Head of Data Analysis of Left Hand Math LLC, a market data analysis firm in Atlanta.

He reports his wife is a graduate student in Archeology at the University of Georgia.

He reports no investments in a business with a market value of more than $5,000 or for which he ownership more than 5 percent of the total interests of the business.

The qualifying form completed by Thomas for Post 3 on the Watkinsville Council lists his age as 40, his occupation as Georgia Army National Guard, and his address as 1161 Christian Terrace.

Thomas states he has lived in Georgia 40 years, in Oconee County for 30 years, and in Watkinsville for eight years.

The qualifying form for Tucker for Post 4 lists her age as 47, her occupation as realtor, and her address as 51 Barnett Shoals Road.

Tucker reports that she has lived in Georgia for 40 years, Oconee County for 10 years, and Watkinsville for 10 years.

The qualifying form completed by Campbell lists his age as 58, his occupation as business owner, and his address as 39 South Main Street.

He says he has lived in Georgia for 30 years, in Oconee County for 19 years, and in Watkinsville for 14 years.

Terms on the five-member Council are for two years.

I have lent a camera and tripod to someone to record the comments of Ferguson, Johnson, and Auerbach at the Democratic meeting and will attend myself via Zoom.

The Oconee County Republican Party will not allow me to video record its meetings, which are not live streamed.

Parrish and Repetske are seeking Post 2 on the Board, currently held by Parrish.

Hammock and Eagling are seeking Post 3, which is open.

That meeting will be at the Oconee County Civic Center, 2661 Hog Mountain Road, west of Butler’s Crossing.