Julie Mauck has called a meeting of interested local citizens for 6 p.m. tomorrow (Thursday) at Mars Hill Baptist Church to develop a new plan for incorporating Christian instruction into the curriculum of Oconee County Schools.

Working with LifeWise Academy, Mauck plans to ask the Board to allow K-5 students at Oconee County Schools to leave their campuses during regular school hours for Bible-based instruction.

The Oconee County Board of Education turned down a request by the Oconee County Christian Learning Center in September of 2016 for a released time program for Bible instruction.

Mauck said that the new request she expects to make will be different in that it will involve only K-5 students and will not involve dual enrollment or other transcript credit hours.

Mauck identifies herself as LifeWise Champion. LifeWise is based in Hilliard, Ohio, outside Columbus.

Mauck also is Chapter Chair, Moms for Liberty--Oconee County and ran unsuccessfully last year for the Republican Party nomination for Post 3 on the Board of Education.

Mauck announced the organizational meeting for a local LifeWise initiative on Oconee 411 (GA), the popular Facebook Group she moderates.

She also promoted the meeting in an interview with WGAU Radio Host Tim Bryant on Wednesday.

In the Bryant interview, available on the Mission: TimPosssible Podcast, Mauck described the meeting Thursday evening as a “kickoff” meeting designed to “enable Oconee County School children to hear about the Gospel during school hours.” 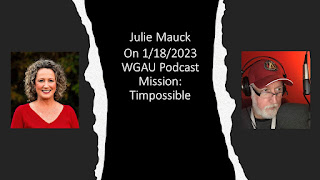 She said representative of LifeWise Academy will be coming from Ohio “to help launch this program.”

The meeting will be at Mars Hill Baptist Church, 2661 Mars Hill Road, just west of the intersection with the Oconee Connector.

The LifeWise representatives “will give us a little information, an overview about what their mission is, what the launch process is, and what the next step would be for us to get this going here in Oconee County.”

LifeWise, according to its web site, has developed a curriculum “designed to take students through the entire Bible, beginning in Genesis and ending in Revelation, over the course of five years.”

“Each lesson reviews a Bible passage as well as a ‘Living LifeWise’ character trait,” according to the site. “The lessons' order and activities are flexible and can be modified as the teacher finds necessary.”

Founded in 2018, LifeWise Academy is a division of Stand For Truth, an event-based nonprofit ministry with a mission to reach public school students, according to the group’s web site.

The first two LifeWise programs launched in the fall of 2019, the site says, and “LifeWise Academy will be serving 125 schools this year.”

Mauck said LifeWise “educated me a little bit on a Supreme Court Case that actually protects religious instruction release time, which enables parents–as long as it is parent permitted, 100 percent privately funded, and off of school property--you can give Bible education to kids in public schools.”

“They do this during the time of the day that children are not actually missing academic programs,” Mauck said.

“They actually will find a location in a church, or somewhere off a church property, buy a building,” she continued.

“They have buses that will transport the children, during a special time, like art, physical education, whatever the school is able to work with us on,” she said.

“It would be for a day a week, a day every two weeks, every day, whatever the school will allow these children to do this program in. So they really won’t be missing anything academically.”

On Aug. 10, 2015, Rick Pettigrew, on behalf of the organization Oconee County Christian Learning Center (OCCLC), asked the Oconee County Board of Education to consider offering an optional Christian Education class as an elective for high school students, according to the official minutes of that meeting.

The class would be held off campus at one of two church locations with transportation provided by the OCCLC, according to those minutes.

The Board of Education sent Pettigrew a letter on Sept. 19, 2016, responding to his request.

The letter stated that “The Oconee County School System does not currently have a release time policy for such services proposed by the OCCLC to take place during school hours including the granting of credit.”

“The entire Board of Education writes you today to inform you that it cannot support nor approve the multiple actions necessary to implement your proposal, including the request for release time and the granting of school system course credit,” according to the letter.

I asked Mauck in an email exchange after the interview with Bryant to explain the differences between what she plans to propose to the Board of Education and what the Oconee County Christian Learning Center proposed. 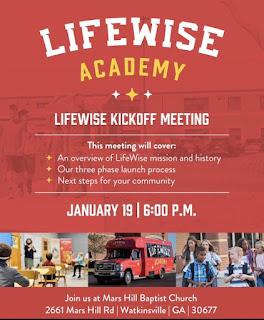 “It's our prayer” that the Board of Education “will see the differences in the proposed programs and the value added to our school system this time,” she wrote.

“The two biggest differences between the two programs are that ours is for K-5, not high school,” she continued “and we are not looking for dual enrollment or other transcript credit hours.”

“We have not put together a plan for approaching the BOE with our request yet,” she wrote. “After the LifeWise Kickoff Meeting tomorrow, we will put together a local Steering Committee and make those decisions as a team.”

Mauck told Bryant she already has more than 150 signatures of Oconee County citizens “saying they want this here.”

“We are hoping to have it launched this fall, but it just depends on how everything goes,” she continues. “We’re just going to keep praying about it and push through. I’m in it for the long haul. But we’re certainly hoping to make it available this fall.”

Bryant asked Mauck for more detail on the LifeWise curriculum.

Mauck said the curriculum does not include comparative information about other religious teachings.

“It is character focused,” she said. “It is character education through teaching of the Gospels, from the inside out. But is 100 percent, unapologetically Gospel centered.”

“Just to plant the seed in these children, and take them through Genesis, through Revelations. Just the nuts and bolts,” she continued. “They don’t wade into the cultural or political abyss with these children. It is just very Gospel centered.”

Bryant said he anticipates objections about the separation of church and state.

“You and I know there is no such thing as separation of church and state,” Mauck responded.

“We have the freedom to practice religion,” she said, “and this is one of the ways we’re allowed to do it.”

Here's an idea: if you wish, provide 'gospel centered' instruction in churches or homes or private schools and avoid interfering with the daily routine of public school instruction.

... the curriculum does not include comparative information about other religious teachings.

Without saying so, it's all about about indoctrination. So much for avoiding "divisive concepts" in public education. BOE should reject this wrong-headed and disruptive proposal.

All,
Just a reminder. I will not publish a comment that does not include a real name.
Thanks.
Lee

“You and I know there is no such thing as separation of church and state,” Mauck responded.

What an arrogant, know-nothing take. She should be honest - one of those Christian values - and just admit she wants children receiving Christian indoctrination instead of getting an actual (valuable) education. Agree with Jim - go to church, do this at home / homeschool, or pay for private religious instruction if you want it so badly, but keep it away from our public schools. Parents opting into this will only set their children up to fall behind their peers.