Oconee BOC To Hash Out Budget and Power Relationships

And Power For Prince Avenue Too

The Oconee County Board of Commissioners meet on Tuesday night to hash out two seemingly unrelated issues, the 2009-2010 fiscal year budget and rules of governance for the Board itself.

In fact, the two issues are tightly linked.

The four commissioners, starting back in February made it clear they wanted to have a strong hand in fashioning next year’s budget.

In the end, BOC 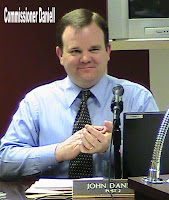 Chairman Melvin Davis submitted a budget he and Finance Director Jeff Benko agreed on, leaving the four commissioners either to accept it or try to reshape it in public.

The four commissioners have taken the bait, but so far they have been unable to agree on exactly what changes need to be made in the budget that Davis said in his letter to citizens is conservative yet provides "for the continuation of our basic governmental needs."

These budget issues will dominate the first part of the meeting, which starts at 7 p.m. in the regular commission meeting room at the courthouse in Watkinsville.

In the second part of the meeting–officially labeled a work session--commissioners are to examine as yet undisclosed proposals from County Attorney Daniel Haygood to clarify the powers of the commission chairman and of the other four commissioners.

This is an issue the chairman and four commissioners have been struggling with for years, mostly behind the scenes. It broke into the open on Sept. 25 when the board held a working session at the courthouse on the topic.

The Board has held two subsequent meetings at the Community Center in the new Veterans Park on Hog Mountain road, on May 6 and 19. These are now available for viewing at my Vimeo site.

An editorial in the June 11 issue of The Oconee Enterprise, which generally shows great fondness for Davis, accused the commissioners of "jealousy" of Davis and new Commissioner John Daniell of "idealism warring with his adding machine." (Yes, that really is what it said.)

The editorial concluded with the admonition to "Leave the budget and Melvin Davis alone."

Not to be out done, the Athens Banner-Herald gave Johnathan McGinty, a former reporter and editor at the paper and current blogger, space in the paper on June 16 to attack the four commissioners for the "absurdity of trying to pinch pennies" by making more cuts in the budget Davis put forward.

McGinty also talks about a DeLorean "minus Michael J. Fox" in a kind of one-upmanship with the Enterprise’s "adding machine."

McGinty wants the Board to go along with Davis’ proposal to use part of its $11 million Fund Balance to make the budget work. Davis originally proposed that the county draw $921,734 from that fund, but Benko, in response to the four commissioners, has cut the amount of the draw to $613,234.

McGinty uses the figure of $10 million for the surplus, but Benko assured me in a conversation on May 29 that the figure is $11 million. The problem, according to Benko, is that not all of that is unencumbered.

The county used $6 million of that to front the right of way purchase for the Oconee Connector Extension that will open up land for commercial development on Epps Bridge Parkway. The state reimbursed the county, but it has set the money aside for a similar purchase arrangement of right of way for widening of Mars Hill road in the future.

To keep even more money in the Fund Balance, Daniell has proposed that the county stop paying $35,000 to John McNally, who has a contract with the county to serve as executive director of the Keep Oconee County Beautiful Commission.

Mary Mellein, chairperson of the Commission, sent an e-mail message round the county today saying the action essentially would eliminate the Commission. According to Mellein, the Oconee County body must be affiliated with the National Keep American Beautiful Inc, and to be such an affiliate, it must have a full-time executive director.

At the June 2 meeting, when the cut in McNally’s position was last discussed, the Board voted to refund $26,000 to Prince Avenue Baptist Church in code enforcement fees, retroactive to last year. So the Board spent nearly McNally’s salary doing a favor to the church and its advocate, businessman, developer and landowner Mike Power.

That’s not the only irony of this budget discussion. The Oconee County Board of Education, with hardly any public attention, passed its budget on June 8. That budget is for $75 million and also is balanced by drawing on reserves.

The budget being considered by the BOC is only for $34.5 million, yet it has generated, in relative terms, a lot of attention.

And while both the BOE and the BOC have held the tax rate steady, homeowners can expect to pay about $200 more next year in property taxes because the state almost certainly will not be providing funds to the county for Homestead Tax Relief.

So despite all the talk about holding the line on tax rates and moderate or non-existent property value growth, taxes are going to go up for most people.

That’s the reality of the front part of the BOC meeting on Tuesday. The reality for the back part is that BOC Chairman Melvin Davis has a lot of power regardless of what rules the others members put in place.

But those other four members have the ability to check that power, as they also have demonstrated with the budget.