How Deep to Dip

The BOC will take up its budget again on Tuesday night with the intent of passing a final document before the deadline of the end of the fiscal year on June 30. The BOE adopted its budget on June 8.

Both the BOE and the BOC budgets are heavily dependent on local property and sales taxes, though the state funds about half of the BOE budget.

A comparison of the two budgets shows the difference between the basically flat budget approved by the BOE and the greatly reduced budget under review by the BOC results from increased federal funding for Oconee County schools, the projections of tax income being used by the two boards, and a greater willingness on the part of the BOE to dip deep into reserve funds.

The BOE budget includes $28.5 million in state funding. That figure had been $31.2 million the year earlier.

The budget approved by the BOE on June included $1.7 million in American Recovery and Reinvestment Act (federal stimulus) funds and an additional $3 million in federal instructional grants.

The current fiscal year budget did not include stimulus money, but it did include $1.8 million in federal instructional grants.

The budget the BOE approved for next year draws $1.5 million from its reserve funds to balance the budget, leaving $8.8 million in the reserves. The $1.5 million is a little less than the Board drew from the funds last year to balance income and expenditures. 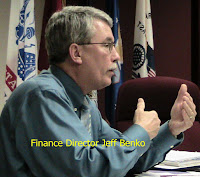 The current year’s BOE budget was based on $70 million in revenue; the new budget, prepared under the direction of Oconee County Assistant Superintendent for Financial Operations Randy Morrison, projects total revenue of $71.3 million.

For the county, BOC Chairman Melvin Davis proposed a budget of $34.7 million to the commission. The four commissioners requested additional budget reductions that are expected to be finalized on Tuesday night. The meeting starts at 7 p.m. at the courthouse in Watkinsville.

Davis proposed drawing $921,734 from the reserve, compared with just under $2 million a year earlier. The other four commissioners proposed more cuts in spending to bring that figure down to $613,234. At least some commissioners want to cut even more.

The county has $11 million in the reserve, but it tentatively has set aside about $6 million for right-of-way acquisition for Mars Hill Road expansion. If that amount is considered encumbered, the result of the budget proposed by Davis would have been to draw down the reserve to about $4 million.

Benko told me that in an email message on June 13 that there are only rough guidelines on what is the proper amount that should be in a reserve fund. He said the range of those guidelines is from 25 to 40 percent of the budget.

With a total county budget of just under $35 million, that range would be from just under $9 million to $14 million.

How deep either the school district or the county actually will have to go into reserves will depend in part on how well Morrison and Benko will have projected revenues.
Posted by Lee Becker at 8:48 PM

Thanks for providing useful information on the County Government and the School budgets. The stuff written in our 2 papers is worse than useless. One is focused on protecting Davis and who knows where the ABH comes from. It is good to see the 4 commissioners challenging the Davis budget. We are more likely to get a better budget when they are all engaged. They should not be considered pot plants but active participants in the process.