The Oconee County Board of Commissioners Tuesday night set up the first of its town hall meetings for Oct. 20, following up on a promise made to the public when it passed its reorganization plan on Aug. 4.

Commissioner Margaret Hale (right), who proposed the meetings with the public at that August session, said on Tuesday night she wanted a format "where a citizen has the right to ask the question of one of us or all of us and we respond back with an answer." She said she 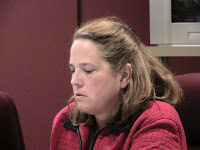 wanted to "keep it informal as much as possible."

The Oct. 20 meeting will be held from 7 to 9 p.m. at the Civic Center on Hog Mountain road. In the half hour before the formal session, commissioners will be available to meet with citizens and talk one-on-one.

The commissioners said they will be available after the two-hour session to talk individually with citizens as well.

Alan Theriault, county administrative officer, will moderate the meeting. He indicated he would give citizens the chance to ask their questions during the first part of the two-hour session and then allow commissioners to offer their proposals to the citizens if time permits.

Hale proposed the town hall meeting after the board passed an ordinance in August that changed the reporting line for Theriault and County Budget Director Jeff Benko. In the past, they reported only to Commission Chairman Melvin Davis. With passage of the ordinance, the pair reports to the full board.

Hale said the board needed to do more to communicate with the public and proposed the meeting as one strategy. Commissioner Jim Luke spoke out in support.

Commissioner Chuck Horton said Tuesday night it is his hope the board will do a second such town hall meeting after the first of the year.

In other action on Tuesday night the board approved a rezone and a series of variance requests to allow the New Life Apostolic Church on Hog Mountain road in Butler’s Crossing to upgrade its existing neighborhood church to a community scale church. The expansion will increase the capacity of the church from 344 to 500 seats.

The board also approved a request from local businessman Zachary McLeroy to rezone nearly 150 acres on Malcom Bridge road between Hodges Mill road and Rocky Branch road from master plan development back to agriculture.

The land had been rezoned from agriculture in July of 2003 for a high density master plan development to be called Kensington Park.

According to Ken Beall, who represented McLeroy at the Tuesday meeting, developer Bob Cain discovered that the amount of rock on the site made the project extremely expensive.

McLeroy bought the land with the plan to build his own "estate," Beall said, and the agricultural zoning would allow that.

The lot remains wooded with pasture and drains north to Barber Creek and east to a branch of Barber creek.

The board also approved a $300,000 proposal by Utility Department Director Chris Thomas that the county upgrade a well on Hillcrest drive and sell the water to Walton County, but only after Commissioner Horton removed the item from the consent agenda and raised questions about the project.

"I don’t know why we want to spend that kind of money and turn around and sell the water to Walton County," Horton said. The board voted 3-1 with Horton in the minority to go forward with the project.

After lengthy discussion, the board also voted to do its next round of advertising for citizen applications for committee appointments in The Oconee Leader, rather than in The Oconee Enterprise, as has been the policy in the past.

Commissioner Luke said he wanted to provide support to both of the weekly newspapers, since both are businesses operating in the county. He also said the Leader, which is distributed free, has a higher circulation than the Enterprise, which is a paid circulation publication.

Russ Page, a citizen active in many issues in the county, said he thought it was a problem for the board to be involved in making decisions about advertising spending and suggested Administrative Office Theriault was the appropriate person to do that.

The board majority was severely criticized by the Enterprise in the run-up to the passage of the reorganization plan, which Commissioners John Daniell, Hale, Horton and Luke favored and Davis opposed.
Posted by Lee Becker at 10:40 PM