The Keep Oconee Beautiful Commission voted tonight to elect Esther Porter to serve as its volunteer executive director to replace John McNally, forced into retirement as paid executive director at the end of this month as part of a cost-cutting decision by the county.

Mary Mellein, chair of the commission, said having Porter serve as executive director will allow the local organization to meet the requirements for affiliation with Keep America Beautiful, Inc., a national non-profit organization headquartered in Connecticut. 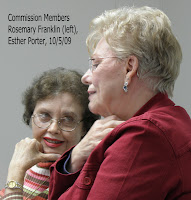 Keep Oconee Beautiful Commission also is an affiliate of the Keep Georgia Beautiful program in the Georgia Department of Community Affairs.

Porter will use office space in the Utility Department previously set aside for McNally and coordinate her work with Amy Morrison, stormwater/environmental coordinator in the Public Works Department.

Porter is a member of the Keep Oconee County Beautiful Commission and a local businesswoman.

Upon election, Porter announced that an appreciation reception will be held from 3-5 p.m. on Nov. 1 for McNally at the Oconee County Civic Center on Hog Mountain road.
Posted by Lee Becker at 9:09 PM