Oconee Farmers Market To Launch on May 8; Strolls at Harris Shoals Start A Week Earlier

Oconee County’s Farmers Market will launch its 2010 season on May 8 in the area behind and beside Eagle Tavern in Watkinsville.

Russ Page, one of the two members or the Board of Directors of the market, told me that the decision on the start date was made last evening in a meeting at the library in Watkinsville attended by himself and Board Member Jamie Swedberg as well as about a dozen vendors.

Page said about 25 vendors have expressed an interest in participating in the market this year. 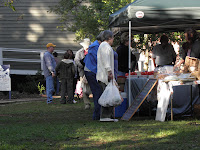 Another event, launched last year by Oconee Democrats, will start in Watkinsville on May 1.

The Saturday Strolls, which last year began at the courthouse across the street from the Farmers Market, will be based this year at Harris Shoals Park on Experiment Station road.

Brad Sanders, an authority on the naturalist William Bartram, will lead the May 1 stroll and talk about the landscape Bartram saw when he visited the North Oconee River in the summer of 1773.

Robert Wyatt, adjunct professor of ecology at the University of Georgia, will lead the stroll on May 8, the date the Farmers Market gets underway. Wyatt will identify trees and shrubs on his tour.

Pat Priest organized the strolls last year and has done so again this year. The stroll lasts for an hour. Participants make a $5 contribution to the cause of choice of the stroll leader.

Last year's Saturday Strolls series raised more than $1,000 for non-profits in the area, according to Priest.

The series this year is scheduled to run through July 31.

The Farmers Market, which started in 2004 on the front lawn of Eagle Tavern and moved to the rear last year to accommodate more vendors, has helped make Watkinsville a Saturday destination.

Other attractions in Watkinsville are the shops on Main street and The Granary Bakery and Country Store and Jittery Joe’s at the south end of downtown.

Thomas Orchards, at the US 441 bypass west of downtown, already is open for the season selling plants and garden supplies, as well as the usual flavors of ice cream.

Jerry Thomas told me on Saturday he expects to have South Carolina peaches for sale in the middle of May and his own peaches available a month later.
Posted by Lee Becker at 10:07 PM