When the Oconee County Board of Commissioners approved a second rezone request and conditional use permit for Oconee Safe Storage on Hog Mountain road on Dec. 1, it tried to use some leverage with the owner.

The Commission was upset that one of the buildings–the tallest and most visible from Hog Mountain road and labeled Building No. 5 on the plans--had a grayish-green metal rather than brick facade.

This was true despite the fact that the property owner, Rose Creek Development LLC, had promised to have brick facades on building exteriors facing Hog Mountain road when it asked for the original rezone for the site back in 2006. 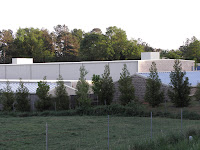 The metal, rather than brick, had several of the commissioners upset, Commissioner Chuck Horton most notable among them.

To fix this discrepancy, the commissioners wrote into the zoning ordinance passed on Dec. 1 the requirement that “All building exteriors visible from public streets shall have brick or brick face facades.”

And to make sure Oconee Safe Storage managers got the point, the Commission said that the county would not issue a Certificate of Occupancy for the lower level of Building No. 5 until the brick facade problem was fixed.

It hasn’t asked for a Certificate of Occupancy for the bottom level of Building No. 5.

And the county has done the only things left open to it.

Passers-by on Hog Mountain road--as well as any of the often numerous cows and calves on the neighboring USDA pastureland--that happen to look are seeing metal rather than brick on the back and visible side of Building No. 5, though there is no evidence the cows and calves recognize the difference. 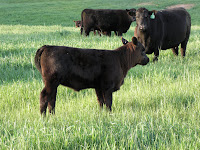 In fact, it was the amount of space, not the metal facade, that brought Oconee Safe Storage back to the Commission on Dec. 1.

To date, the county has issued three Certificates of Occupancy for Oconee Safe Storage, a review of the file in Code Enforcement office shows.

The first was on Feb. 24 for 684 square feet of heated space–the office building.

The second was on Feb. 27, was temporary, and was for 50,810 square feet of unheated space–the eight storage buildings, including Building No. 5.

On March 30, 2009, the county issued a new, non-temporary permit for the eight storage buildings, including Building No. 5.

What caught code enforcement’s attention, according to B.R. White, head of the county Planning Department, was that the office building was actually 1,270 square feet in size, rather than the 684 covered by the Occupancy Permit issued on Feb. 24.

Code enforcement discovered that discrepancy when doing inspection before the occupancy permit were issued, White told me in December.

Until Oconee Safe Storage needs the extra space in Building No. 5 or has some other reason to want the new Certificate of Occupancy, passers-by–and the cows and calves on the USDA farms–will be looking at gray-green metal instead of brick on Building No. 5.
Posted by Lee Becker at 10:05 PM