All About Pinestraw still had its sign up today and was continuing sales at the intersection of US 441 and Hog Mountain road even though the location is not properly zoned for commercial activity.

Steve Hansford, director of code enforcement for Oconee County, has given Tyler McClure, 1050 Townside way near Bishop, until June 15 to begin the process of rezoning the property.

If McClure does not start the rezone process, he will have to close the business on June 15, according to a letter Hansford sent to McClure on April 6. 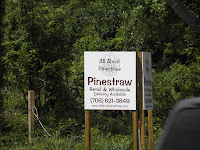 Hansford told McClure in the letter that he had made a mistake when he issued McClure a business license on Dec. 23, 2009.

The pine straw retail and wholesale business is the second to pop up this year on property off a spur of Hog Mountain road left over when the intersection of that road and US 441 was reconfigured years ago. 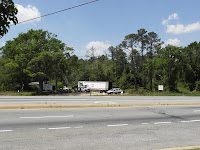 The other business, selling firewood, has closed down its operation, Hansford told me yesterday, though a truck partially loaded with firewood was on the site today.

In the firewood case, Hansford had written on Feb. 24 to Sandy Callaway of S.C. Logging, 1080 Red Oak court, south of Barnett Shoals road near the Oconee River, asking for a copy of “your sales tax certificate for retail selling of firewood” or a letter from the Department of Revenue indicating that none was needed.

On March 2, Hansford followed that with a letter to Callaway saying that he had not received an answer to the Feb. 24 letter and that Callaway’s license would be revoked in 15 days if Hansford had not heard from Callaway.

In the second letter, Hansford said he needed “copies of your sales tax certificate, copies of your Liability and Workers Comp insurance and a notarized statement from the property owner giving you permission to operate a business on their property.” 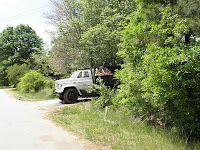 I had filed an open records request for the files of Code Enforcement on these two businesses on April 9. The records, which I reviewed yesterday, did not contain any response from Callaway to either letter.

Hansford told me yesterday that the license had been revoked.

Code Enforcement had issued S.C. Logging a business license on Jan. 5, 2010, according to the file I reviewed.

According to county tax records, the property on which S.C. Logging was operating is owned by Colette Harben, 1841 Robin Hood road, off Hog Mountain road west of Butler’s Crossing. No part of the 3.5 acre property from which the firewood was sold is zoned for business.

In fact, according to B.R. White, planning director for the county, all the properties fronting Hog Mountain road on its north side between Welbrook road and US 441 are zoned AR-1, for agriculture and residential use, except a small strip at the front of the property being used by All About Pinestraw.

The property on the south side of Hog Mountain road is commercial and is occupied by the Racetrac gas station and convenience store.

The county’s unified development code allows logging on AR-1 property, but not a temporary sawmill or a chip mill. Support activities for forestry would require a special use permit on an AR-1-zoned property.

The property with the pine straw operation is owned by Toccoa 85 L.P. of 1040 River Run outside Bishop. According to the Georgia Secretary of State database, the registered agent for Toccoa is George Howington of the 1040 River Run address.

White said he assumed that the strip of commercial land at the front of the 1.7 acre property had been classified as business earlier and had been affected by the US 441 widening.

I asked White about the firewood and pine straw operations when I visited him on April 9. I told him I passed the sites nearly every day, had not remembered any rezone for the area and was curious about them.

White told me that his office had received an inquiry about the firewood sales back in January and he had referred the matter to Code Enforcement.

The Planning Department and Code Enforcement both operate out of the Courthouse Annex building across the street from the main courthouse building in Watkinsville.

Deanna Ruark of the Planning Department confirmed at the end of the day on Friday that McClure of All About Pinestraw has not yet started the process for a rezone of the property on which he is operating.
Posted by Lee Becker at 10:16 PM