Failure of North Georgia Bank Has Effects Throughout Oconee County

Only One Bank Standing


The failure of North Georgia Bank on Friday cut deep into the political, commercial and social fabric of Oconee County.


Bank President Charles E. “Chuck” Williams is president of the county’s Industrial Development Authority, having been appointed to that body by the Board of Commissioners.


Kenneth Mann, vice president of the bank, was the 2010 chairman of the Oconee County Chamber of Commerce.


The bank has made contributions to numerous charitable organizations in the county since it opened its doors 11 years ago, including to the Farm-City Tour of the Chamber of Commerce, Watkinsville-based Extra Special People and the Oconee County Senior Center.


While depositors’ funds were transferred intact to BankSouth, which took over North Georgia Bank, the 28 employees are not guaranteed a job, and the bank’s investors could well lose everything. 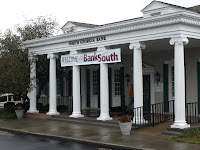 The bank was founded by Williams and Kenneth Beall, James Bowers Jr., Patricia Ivy, Don Norris, Edwin Thaxton, and Harry B. Thompson, all of whom invested in the bank.


All served on the initial Board of Directors and continued to serve, with one exception, in that capacity until the bank’s closing.


Beall is a landscape architect and land planner who has been involved in most of the major development projects in the county over the last 10 years.


Bowers is a stockbroker and financial advisor.


Ivy is a prominent real estate and development agent and served with Williams on the county’s Development Authority.


Norris, who passed way in 2009, was an insurance adjuster and member of the BOC. He was not replaced on the board of directors.


Thaxton is in real estate and development.


Thompson is an equipment distributor.


Before opening the bank, Williams and his fellow founders made a public stock offering, and many members of the Oconee County community invested.


Former BOC Chairman Wendell Dawson reported yesterday on his blog, Another Voice from Oconee County, that he was one of them, having invested $5,000 in the bank.


While the bank is connected to the community in many ways, its face has most often been that of Williams.


Born in 1955, Williams grew up in Watkinsville, graduated from Oconee County High School and the University of Georgia, and began his career in south Georgia as an agricultural management and loan specialist.


Williams worked in Atlanta and Greensboro in banking before returning to Oconee County in 1999 to launch North Georgia Bank, which opened its doors on April 17, 2000.


In March of 2010, then Gov. Sonny Purdue appointed Williams to the Georgia Forestry Commission board.


In June, he took over as chairman of the Georgia Bankers Association.


Locally, Williams has been active in the Chamber of Commerce and in local politics, particularly when development has been at issue.


In 2007, when BOC Chairman Melvin Davis needed support with the Board of Commissioners for the Hard Labor Creek Reservoir project in Walton County, Williams joined Oconee State Bank President Amry Harden in urging the BOC to join Walton County.


It did, with Davis breaking the 2-2 tie vote among the other commissioners.


Davis is Williams’ vice-chairman on the Industrial Development Authority.


At a Town Hall Meeting the BOC held on development in June, Williams spoke several times, once raising a question about the equity of the county’s Future Development Map, which makes it less likely land in the south of the county will be opened up for development.


Williams lives at 2410 Old Watson Springs Road in the southern part of the county, though he said he, personally, was not unhappy with the development map.

In late 2009, Williams and his brother, a former member of the Board of Education, sold to the school board land in Watkinsville for a future school system headquarter in a transaction that subsequently became controversial in the community.


And Williams stepped forward in the Spring of 2010 as an advocate for the University of Georgia College of Agricultural and Environmental Sciences when the university was facing budget cuts and had targeted the agriculture college.


Oconee State Bank, founded in the 1960s, is the only Oconee County bank standing now that the state Department of Banking and Finance stepped in at 6 p.m. on Friday and closed North Georgia Bank.


At the closing on Friday, the state turned North Georgia Bank over to the Federal Deposit Insurance Corporation as receiver.


Banking is a regulated business in Georgia and other states, and the Georgia Department of Banking and Finance has as its mission the promotion of “safe, sound, competitive financial services in Georgia through innovative, responsive regulation and supervision.”


The failure of North Georgia Bank probably was not much of a surprise to those in the know.


Shareholders had been notified of problems at least as early as January of 2009.


On July 14, 2009, the bank had entered into an agreement with the FDIC and the Banking Commissioner of Georgia not to grant dividends, take on increased debt or purchase shares of its stock without prior approval.


The Street, a financial news and services web site, had the bank listed on its Bank Watch List of undercapitalized institutions.


And The Oconee Enterprise had a front-page story last week indicating that North Georgia Bank had returned funds to potential new investors after its effort to raise additional capital last year failed to produce a sufficient response.


But only insiders knew of the timing.


The Georgia Department of and Finance does not give any public notice before a financial institution is closed.


State and federal agents came to the bank’s two offices at 6 p.m. closing time on Friday. According to David Barr, press agent for the FDIC, a press release about the action was put out 15 minutes later.


The Atlanta Journal-Constitution, The Oconee Enterprise and the Athens Banner-Herald had the stories on their web sites about 15 minutes after the release went out.


BankSouth will purchase all of the deposits, except those from some deposit brokers and those placed over the Internet.


BankSouth also agreed to purchase $123.9 million of the assets, including all of the loans.


The FDIC and BankSouth entered in a “loss-share transaction” in which BankSouth will assume some, but not all, of the loss if the loans are not repaid.


The FDIC estimates that the cost to the FDIC of the closure of North Georgia Bank will be $35.2 million.


Stockholders are fourth and last in line for receiving claims on the bank’s assets.

Very interesting kettle of interactions, as you say political, economic and social.
FDIC typically pursues some sort of redress from management.
That will also be a fascinating and revelatory reportage, probably not well received by the objects of the investigations to come.