Zoom Bait on Jennings Mill Road does not have a sewer hookup and relies on its septic system to treat its waste water.


When it asked the county for a rezone in 2004 so it could expand its warehouse space, Zoom Bait didn’t ask the county for any sewer services, saying they were unnecessary for the expansion.


St. Mary’s Highland Hills, Inc., Zoom’s neighbor on Jennings Mill Road, asked for a change in zoning in 2005 so it could expand its retirement community by adding a hospice and an Alzheimer’s and dementia center. 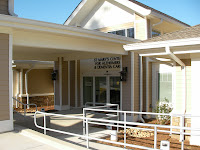 The county approved the zoning change, and in 2008 the county granted St. Mary’s 5,100 gallons per day in additional sewage treatment capacity for the two new units.


After the design was finished, the county reduced that amount to 1,700 gallons per day to reflect projected needs from the actual facility to be built.


That 1,700 was in addition to the 7,500 already assigned to St. Mary’s for the retirement community.


That contract continues in perpetuity.


Of the 25,000 in capacity Oconee County bought from Clarke County back in 1994, the county currently is using about 15,000 gallons on an average day, Utility Department Director Chris Thomas told me.


According to Thomas, Zoom Bait needs 4,580 in sewage treatment capacity to replace its septic system, or 1,420 less than the excess capacity.


The problem, according to Thomas, is that at least some of that excess capacity already has been allocated to other potential future users.


And Clarke County has said it cannot handle addition effluent.


On Tuesday, the Board of Commissioners is scheduled to decide whether to go forward with construction of a new $773,000 sewer line that would provide sewage services to Zoom Bait for the first time and duplicate the sewage services currently provided to St. Mary’s.


The 114-acre property already has access to a sewer line, but the new line would not require the developer to pay for expensive pump stations to get the sewage from future businesses on the site to the existing line.


The county’s experience with these pumps has been negative. They are costly to maintain and often stink.


Chairman Davis, in his weekly column in the Jan. 27 edition of The Oconee Enterprise, focused on the value of the new sewer line for future commercial development, including of the 114-acre tract owned by the Gordy Family and, according to the county, under option to Atlanta developer Frank Bishop.


That column appeared on the county’s web site the following day.


The Georgia Department of Community Affairs has given the county a grant of $186,711 to cover part of the proposed costs for the sewer line.


The county told the state it needed the grant and sewer line to keep Zoom Bait, which manufactures artificial fishing lures, from leaving the county and to help St. Mary’s operate within its “financial means.”


The focus on low and moderate income jobs made it more likely the county would obtain funds from the state, which administers monies from the federal Economic Development and Employment Incentive Program.


In the proposal, the county did not hide the fact that the proposed sewer line would cross the 114-acre undeveloped tract. It only said it was proposing the project to help Zoom Bait and St. Mary’s and that no development plans for the 114-acre parcel were before the county.


I called the Department of Community Affairs office on Jan. 28 to ask if the state cared about the county’s current focus on the benefit of the sewer line to the developer of the 114-acre tract.


Brock Smith, who is handling the Oconee County grant, told me that the state does not care.


Smith cautioned that he was new to the job, had not read the application and knew nothing about the controversy over it.


The BOC has the Zoom Bait/St. Mary’s project on the agenda for the Feb. 8 meeting because the Board would not approve at the Jan. 4 meeting a request by Oconee County Economic Development Director Rusty Haygood and Thomas that the county put the sewer line out to bid.


At that meeting, Haygood and Thomas reported on their efforts to get the owners of the property the proposed line will cross to donate easements for the line.


Nothing was said at that meeting about the easement for a fourth property owned by the city of Athens.


When I met with Thomas in his office on Jan. 28, he told me that Oconee County will have to pay Athens between $500 and $600 for that easement.


Thomas told me that when he and Haygood estimated the total cost of the project at $773,000 in July of last year, they were including rough estimates of the amount that the county would have to pay for easements.


The $773,000 projection was based on a bid for the construction work of $642,767 that has expired, making it impossible to know the current best estimate of project costs.


The county proposes to pay for the costs of the sewer line not covered by the state grant from sales tax revenues previously unallocated.


In an earlier version of this story, I reported that the rezone for the expansion of Zoom Bait was in 2005. The Board of Commissioners approved the rezone on Nov. 2, 2004. I apologize for the error, which is corrected in the text above.