The Georgia Environment Protection Division detected no problems with the quality of water discharged from Oconee County’s two wastewater treatment facilities during the September 2013 to April 2015 period, even though the agency criticized the county for “serious violations” of its permits to operate the plants during that time.

The EPD reached its conclusion about the quality of the discharge based on monthly Discharge Monitoring Reports filed by the county during that time period.

The county conducted the analysis used to complete those reports based on samples it drew from discharge of it treatment plant on Calls Creek just outside Watkinsville and from discharge at its Land Application System on Rocky Branch Road near a tributary to Barber Creek.

Self-report of data on discharges from the plants is what is required by the state as part of the permits the county holds to release treated sewage water into Calls Creek and onto the hay field at its Rocky Branch facility.

Based on those county reports, signed by Oconee County Board of Commissioners Chairman Melvin Davis, the county’s two plants met state standards for fecal coliform, total suspended solids, and a host of other criteria.

On May 26, Chairman Davis acknowledged problems with both of its facilities after the county self-reported discharge of an unknown volume of improperly treated wastewater from its Calls Creek facility directly into Calls Creek

That creek runs through neighborhoods along Simonton Bridge Road before flowing into the Middle Oconee River.

Problems at the plants led to the resignation of Utility Department Director Chris Thomas on June 8.

On Tuesday the county posted a notice on its web site that Wayne Haynie, a professional engineer now with Burns and McDonnell of Alpharetta, is the “final candidate” to replace Thomas, pending approval by the Board of Commissioners, probably on Tuesday.

I obtained copies of the Discharge Monitoring Reports for the county’s two wastewater facilities for April of 2013, 2014 and 2015 and for January of 2014 from the EPD.

April 2015 is particularly important because Mark Thomas, Oconee County Board of Education member, showed video he said he recorded on April 3, 7 and 9 at the outflow of the Calls Creek plant. The video seems to show only partially treated sewage water flowing into the creek.

Mark Thomas reported the problem to Chairman Davis, ultimately leading to the acknowledgement by Davis on May 27 of the problems at the plants.

I obtained the DMR reports for the other months for comparison.

In none of the DMRs did the county report any violations of its permit standards.

The monthly reports for Calls Creek include a summary of the recorded data for the county in two bar charts that also show the permit standards.

The first of those charts for April of 2015 is below, with the county data in blue and the state standard in yellow. (Click to enlarge the chart.) 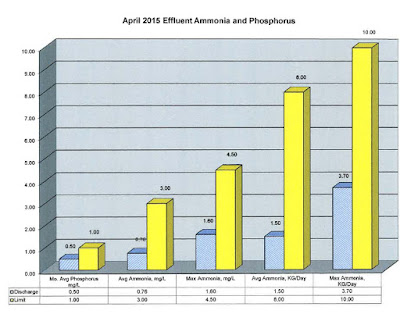 The second chart, which contains the data on fecal coliform, one of the more prominent standards in evaluating water quality, is below, again with the county data in blue and the state standard in yellow. 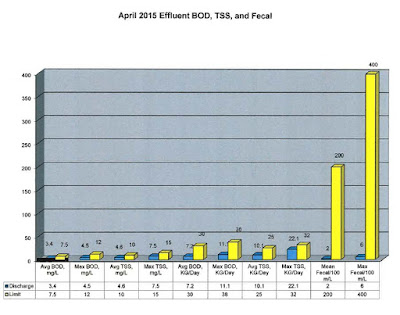 The chart shows the county meeting the state standard by a wide margin.

The permit specifies how the county is to measure its performance.

Fecal coliform, for example, is to be measured at least twice per month. (See Note 2 below.)

In all cases, the measures were far below what was allowed by the permit.

Mark Thomas said he recorded his video on April 3, 7 and 9.

The county did measure total suspended solids on April 3 and reported very low levels far below the permitted level.

The sampling and monitoring is mechanized at the plants, which have been staffed in the past only during the day.

The Calls Creek plant, for example, had human operators on site generally from 8 a.m. to 4:30 p.m., seven days a week.

Davis signs the report, stating that “I certify under penalty of law that the document and all attachments were prepared under my direction or supervision in according with a system designed to assure that qualified personnel properly gather and evaluate the information submitted.”

Price resigned on May 21, saying “I have secured employment elsewhere.”

On Sept. 13, 2013, Pete Dasher, program manager for the EPD Northeast District, wrote to the county telling it of “serious” violations of the county’s permit to operate the Calls Creek plant, just north of Watkinsville.

On Dec. 16, 2014, Donald H. McCarty Jr., EPD Northeast District manager, wrote to the county about “serious violations” at both the Calls Creek plant and the county’s Land Application System on Rocky Branch Road.

The letters contained a long list of violations, focusing mostly on record keeping.

The letters were sent to Chris Thomas as Utility Department director, but BOC Chairman Davis sent McCarty an email message on Jan. 21, 2015, thanking McCarty for a telephone conversation about the LAS “issues.”

Davis indicated he would accept McCarty’s invitation to meet to discuss the issue further.

I filed an open records request with the county to obtain entries on Davis’ calendar for meetings with McCarty since Jan. 1. I was told there were no such entries.

I asked Davis in an email message on Tuesday and again on Wednesday if he had met with McCarty, but he has not answered the email. (See Note 1 below.)

Bob Sheldon, whom the county hired to help it resolve the problems at the two sewage plants, told the BOC on June 30 that he had received three bids for removal of the sludge in the ponds at the LAS site.

On May 19 Sheldon provided the county with a report that said both plants were improperly handing the solids produced by the treatment process. He termed the problems at Calls Creek “critical.”

The commissioners accepted on June 30 in rough terms a bid of $298,500 from PSC Jesco Industrial Services from Calvert City, Ky., for the services at the LAS site. The company was low bidder among the three that submitted estimates.

The BOC was supposed to approve the contract for these services at a called meeting on Tuesday, but County Clerk Jane Greathouse sent out an email message just before noon on Monday indicating that the meeting had been cancelled.

The message indicated that the contract will be before the BOC at its regular meeting on Tuesday.

The BOC also is expected to take action on Tuesday on the appointment of Haynie as Utility Department Director.

According to Haynie’s LinkedIn profile, he has been with Burns and McDonnell since July of 2012.

From February of 2010 to July of 2012, Haynie was with Jacobs Engineering Group of Norcross.

From January 1998 to February of 2010, Haynie was with Jordan, Jones and Goulding in Athens.

Jordan, Jones and Goulding merged with Jacobs Engineering, according to Haynie’s LinkedIn profile.

Jordan, Jones and Goulding has a long history of working with Oconee County’s Utility Department.

In 2005, Jordan, Jones and Goulding prepared a report on long range wastewater strategies for the county, recommending the phasing out of the Calls Creek plant and the LAS site.

It recommended as replacement construction of a new sewage treatment plant on the Middle Oconee River to be operational by 2017.

Jordon, Jones and Goulding also produced cost estimates for a reservoir in Oconee County off Barnett Shoals Road as an alternative to the county’s involvement with Walton County in the Hard Labor Creek Regional Reservoir.

The high costs of those estimates played a role in the county’s decision to partner with Walton County.

Note 1: Davis sent me an email message on the morning of 7/24/2015 saying he did not meet with McCarty of EPD.

Note 2: The frequency of required measuring of fecal coliform at Calls Creek is stated in the county's DMRs that I reviewed. These have been accepted by the EPD. But the actual permit issued on July 15, 2014, for the Calls Creek plant specifies that fecal coliform should be monitored two days per week.

EPD must be really giving OC a break on this. Pretty obvious the DMRs did not reflect the plants' actual performance. Be interesting to see the actual lab data vs what was reported. Guess since the plants are relatively small, they are getting a pass. But, this is still a major black eye for our county.

This is a scandal which won't go over...deservedly so.

It forces us to question the effectiveness of the county government. Well run counties and cities have a county/city manager who runs day to day operations. Elected officials set policies and goals.

Melvin Davis is in no way qualified to run day to day operations, let alone get involved in GDOT issues and being the biggest cheerleader for Frank Bishop's properties.

Look what is happening right now in DeKalb County with their water crisis. Water, sewer, public utilities, etc. are too important for elected officials to meddle in. We need a strong county manager form of government. Elected officials needs to stay in their lane!